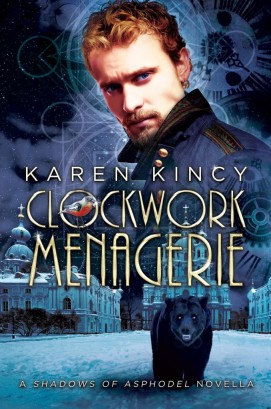 A companion novella to the Shadows of Asphodel series, from Konstantin’s point of view.

1914. Konstantin would love to hide in his laboratory and dissect the clockwork dragon captured from Russia, but the Archmages of Vienna have other plans. He finds himself shipped off to St. Petersburg as the scientific attaché to an ambassador. His orders? Look, but don’t touch. Of course, he considers this an impossible request with so much enemy technomancy to explore.

To make matters worse, Konstantin has to work with the dashing zeppelin commander Himmel, a man who should also be untouchable. They can’t act on the smoldering attraction between them without risking it all. Faced with an illegal relationship and a devious rival technomancer, Konstantin might not return from this mission in Russia without conquering the forbidden.

All of Europe was a mess of alliances, each country eager to defend its honor.

It is 1914 and Konstantin is busy trying to dissect the clockwork dragon. However, he has orders to act as a scientific attaché in St. Petersburg. The mission must uphold diplomacy fully, but once Konstantin discovers a sinister and unethical technomancy practice in his Russian rival he begins to cross the diplomatic lines. Add into the mix Captain Himmel, who makes Konstantin’s cogs whir even though such a relationship is illegal, and it makes for a strained and secretive mission in more ways than one.

Konstantin – an archmage who specializes in technomancy

von Bach – Austria-Hungary ambassador to Russia; in charge of the diplomatic mission

Alexsandr – the Russian guide to von Bach and Konstantin

I’ve already read the first two books in the series, so I wasn’t sure what was going to pop up in this short novella or where it would lead.

The book continues where the second installment in the series left off. It is still 1914 and the brink of WWI is about to come crashing down, despite the Hex that the Archmages created for protection.

Konstantin, an archmage of Vienna, is set off on a mission to Russia with a diplomatic ambassador. It becomes very clear to Konstantin that he is only allowed to look at the various technomancy workings in Russia. He is not to discuss them or touch them. For a man who lives for his research, this is a hard thing to keep from doing, especially when he finds himself a mere pawn in the game. He must come to terms that his own works have caused destruction and death just as his enemies’ creations have.

Heat scorched his face. He had been trotted out like a pawn on the chessboard, ignorant of the bigger players. “Why you?”

“Your clockwork dragon killed dozens of men.” He hated how his voice shook.

“And your hands haven’t been stained by a drop of blood.”

In the Russian clockwork dragon Konstantin has discovered a new and unethical practice in technomancy: Siberian chrysoberyl. The highly unethical and restricted practice is a magnified version of pyschothaumaturgy – “a soul trapped in a diabolical mechanism.” This requires capturing a soul during its moment of death and imprisoning it, creating a beast that possesses an immense power. A highly illegal practice. As Konstantin struggles to prove to the world what he knows to be true, he must make sacrifices, perhaps at his very own cost.

He had never seen Siberian chrysoberyl outside of the latest scientific articles, since the Russian government kept a chokehold on its distribution. Whoever built the clockwork dragon needed approval from the Tsar himself. It would be marvelous to talk with the technomancer who engineered the dragon, but of course that would be consorting with the enemy.

I found Konstatin’s character to be very charming, even when distressed. He tries to always be proper and polite, but he is also very much a nerd and it shows in his own inner conversations with himself. The most comical moment was either when he pretended to be an American to avoid suspicion or wanted to set up a makeshift labratory in Himmel’s hotel room.

Konstantin stroked his beard. “I need to tinker with the temporal magic. Might I use your hotel room as a makeshift labratory?”

Himmel arched an eyebrow. “Try not to burn down the building.”

I loved the initial description of the dowager countess. She is portrayed as something so delicate.

A slim young brunette tilted her head, listening to a gentleman, diamonds sparkling in her ears. Red and gold butterflies perched in her hair, as if she were the most delectable flower, wings quivering in the slightest breeze.

I also loved the relationship that Himmel and Konstantin have with one another, despite their actual feelings for one another. They work together well and their romance must be heavily suppressed in order for them both to survive in their worlds.

I definitely recommend Clockwork Menagerie. It is a captivating story with intrigue, enemies and forbidden romance.

Karen Kincy (Kirkland, Washington) can be found lurking in her writing cave, though sunshine will lure her outside. When not writing, she stays busy gardening, tinkering with aquariums, or running just one more mile. Karen has a BA in Linguistics and Literature from The Evergreen State College.

Prizing is provided by the publisher. Hosts are not responsible.