I am currently reading Miss Priss – On and Off the Court. This is a middle grades read and the first in the Miss Priss series. I kind of need a break from real life and everything else, and it seems that MG is becoming my go-to.

Priscilla Penelope Paxton is a witty ten year old whose interests and curiosity land her in, sometimes, sticky situations.

Dance classes, Girl Scouts, school assignments, friends and hanging out at her family’s drug store, and the local Piggly Wiggly would leave any other person with no time for anything else. Yet, the thrill of basketball and joining the Little Dribblers finds its way into Miss Priss’ heart. Though this interest will prove to be a dream that requires overcoming the greatest of challenges; Mom’s opposition. A task that will require ingenuity, perseverance and a little help from some loved ones.

I finished Home and Away. It’s a World War II Christmas story and is told from the perspective of a son fighting on the battlefields of Europe during World War II and his younger brother back home, struggling with trying to keep his family together during the difficult time. The Hayes family aren’t well off by any means: dad is a mechanic and mom is a housewife who also peels tomatoes for the cannery. Her tomato money pays for Christmas. Dennis struggles with being his father’s son, trying to gather up the money to buy his mom a special gift for Christmas and facing the uncertainties of the war.

I also decided to finish up listening to A Corner of White before the month was over. Even though I am listening to it on audiobook, it makes me want to buy the book and read it myself.

There were some requests for me to review it on the blog. As of right now, I’m not sure if I want to write a review. My time is very limited right now and I’m struggling to juggle everything without anything falling through the cracks.

If I do find some time to review this one, it will show up in late October or November.

1914. Konstantin would love to hide in his laboratory and dissect the clockwork dragon captured from Russia, but the Archmages of Vienna have other plans. He finds himself shipped off to St. Petersburg as the scientific attaché to an ambassador. His orders? Look, but don’t touch. Of course, he considers this an impossible request with so much enemy technomancy to explore.

To make matters worse, Konstantin has to work with the dashing zeppelin commander Himmel, a man who should also be untouchable. They can’t act on the smoldering attraction between them without risking it all. Faced with an illegal relationship and a devious rival technomancer, Konstantin might not return from this mission in Russia without conquering the forbidden. 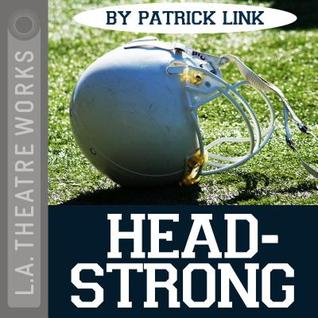 Since it is fall and football season is officially underway, I decided to get this audiobook read and off my Kindle. Headstrong is actually a play and highlights a growing concern in the sport of football.
In the wake of increasing concern over brain trauma in professional athletes, Patrick Link has crafted a story about a retired NFL linebacker who must deal with a family tragedy and his own suffering because of the violence of his chosen sport. Includes a conversation about brain injuries and sports with Dr. Robert Cantu, the Senior Advisor to the NFL Head, Neck, and Spine Committee.

I am really liking cozy mysteries, so when the opportunity for a new series came up I decided to jump on it. Next up I’ll be reading Bread of the Dead, which releases at the end of the month.