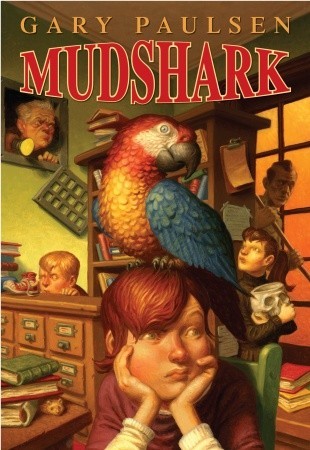 Mudshark is the go-to guy for any mysteries that need solving. Lost your shoe? Can’t find your homework? Ask Mudshark. That is, until the Psychic Parrot takes up residence in the school library and threatens to overturn Mudshark’s position as the guy who knows all the answers. The word in school is that the parrot can out-think Mudshark. And right now, the school needs someone who’s good at solving problems. There’s an escaped gerbil running rampant, an emergency in the faculty restroom, and all the erasers are disappearing from the classrooms.When Mudshark solves the mystery of who’s stealing the erasers, he discovers the culprit has the best of intentions. Now he has to think of a way to prevent the Psychic Parrot from revealing the eraser-thief’s identity. With a bit of misdirection and a lot of quick thinking, Mudshark restores order to the chaos . . . just for the moment.

I read this book to my intervention class. I thought it would be a light and funny read, but I felt it went a little over my 6th graders heads. Of course, these are students who need intervention, so that might be why they could not put together the pieces of what was happening in this book. There is quite a fair amount of sarcasm in this book, coupled with a very distinctive 3rd person point of view with complex syntax that at times was hard to follow.

Mudshark has an uncanny knack for telling students where they last left an item. He has trained well with running crowd control with three baby triplet sisters and two pretty absent and absent-minded parents. He’s the go-to guy at school, and almost revered for his talent, until the librarian gets a parrot who can tell students before Mudshark can.

Overall, there is not much character development except for a glimmer of unknown information about the janitor. Instead, it is just about the plot of the missing erasers and the craziness that is happening at Mudshark’s school.

Each chapter opens with the principal giving an announcement for the janitor to bring some crazy and odd assemblance of items to clean up a mess in a particular area, rantings and beratements about the gerbil on the loose, for erasers to be returned to classrooms and for Lyle (Mudshark) to come to the office.

In the end, Mudshark and a small group of students devise a plan to set several things in their small school to rights, and they pull it off marvelously.

I have read and enjoyed several of Gary Paulsen’s many books, and this is a light and quick read for middle grades. I would recommend for 6-8 grade.

Born May 17, 1939, Gary Paulsen is one of America’s most popular writers for young people. Although he was never a dedicated student, Paulsen developed a passion for reading at an early age. After a librarian gave him a book to read — along with his own library card — he was hooked. He began spending hours alone in the basement of his apartment building, reading one book after another.

Running away from home at the age of 14 and traveling with a carnival, Paulsen acquired a taste for adventure. A youthful summer of rigorous chores on a farm; jobs as an engineer, construction worker, ranch hand, truck driver, and sailor; and two rounds of the 1,180-mile Alaskan dog sled race, the Iditarod; have provided ample material from which he creates his powerful stories.

Paulsen’s realization that he would become a writer came suddenly when he was working as a satellite technician for an aerospace firm in California. One night he walked off the job, never to return. He spent the next year in Hollywood as a magazine proofreader, working on his own writing every night. Then he left California and drove to northern Minnesota where he rented a cabin on a lake; by the end of the winter, he had completed his first novel.

Living in the remote Minnesota woods, Paulsen eventually turned to the sport of dog racing, and entered the 1983 Iditarod. In 1985, after running the Iditarod for the second time, he suffered an attack of angina and was forced to give up his dogs. “I started to focus on writing the same energies and efforts that I was using with dogs. So we’re talking 18-, 19-, 20-hour days completely committed to work. Totally, viciously, obsessively committed to work, the way I’d run dogs….I still work that way, completely, all the time. I just work. I don’t drink, I don’t fool around, I’m just this way….The end result is there’s a lot of books out there.”

It is Paulsen’s overwhelming belief in young people that drives him to write. His intense desire to tap deeply into the human spirit and to encourage readers to observe and care about the world around them has brought him both enormous popularity with young people and critical acclaim from the children’s book community. Paulsen is a master storyteller who has written more than 175 books and some 200 articles and short stories for children and adults. He is one of the most important writers of young adult literature today and three of his novels — Hatchet, Dogsong, and The Winter Room— were Newbery Honor Books. His books frequently appear on the best books lists of the American Library Association.

Paulsen has received many letters from readers (as many as 200 a day) telling him they felt Brian Robeson’s story in Hatchet was left unfinished by his early rescue, before the winter came and made things really tough. They wanted to know what would happen if Brian were not rescued, if he had to survive in the winter. Paulsen says, “Since my life has been one of survival in winter — running two Iditarods, hunting and trapping as a boy and young man — the challenge became interesting, and so I researched and wrote Brian’s Winter, showing what could and perhaps would have happened had Brian not been rescued.”

Paulsen and his wife, Ruth Wright Paulsen, an artist who has illustrated several of his books, divide their time between a home in New Mexico and a boat in the Pacific.

One thought on “Review: Mudshark”