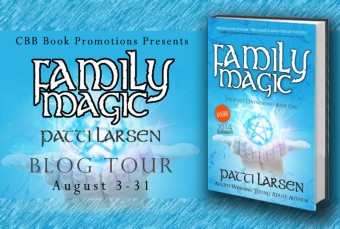 Welcome to my stop for Family Magic by Patti Larsen! This is a young adult paranormal that won 1st place in World’s Best Story contest and is published by Premiere. The tour runs August 3-31 with mostly reviews as well as author interviews and guest posts. Check out all of the other stops on the tour schedule.

Her mom’s a witch. Her dad’s a demon. And she just wants to be ordinary.

Sydlynn Hayle’s life couldn’t be more complicated. Trying to please her coven, starting over in a new town, and fending off a bully cheerleader who hates her are just the beginning of her troubles. What to do when delicious football hero Brad Peters–boyfriend of her cheer nemesis–shows interest? If only the darkly yummy witch, Quaid Moromond, didn’t make it so difficult for her to focus on fitting in with the normal kids. Add to that her crazy grandmother’s constant escapes driving her family to the brink and Syd’s between a rock and a coven site. Forced to take on power she doesn’t want to protect a coven who blames her for everything, only she can save her family’s magic. If her family’s distrust doesn’t destroy her first.

Sydlynn Hayle definitely lives a complicated life. She lives with her coven leader mother, younger demon sister Meira, a demon trapped in a cat’s body (best cat ever), and crazy grandmother. Her demon father lives in another plane. Oh, and her vampire uncle and cousin live in the basement cupboards. She wants no part of being a witch, part of the coven, or anything to do with her magic or demon. She fights hard against her mother, resisting as much as she can, but at school she is still an outcast and not the “normal” that she strives to be. It doesn’t help that she’s constantly having to start over. And then things just start getting all around strange, at home and at school.

At school, Syd has caught the eye of the bully cheerleader Alison, but also the eye of Alison’s boyfriend Brad, too. Alison is pure evil, but Brad tries being a kind friend. One day Syd turns the tables and befriends Alison. Meanwhile, a childhood friend of her mother’s returns to town with her family (the Moromonds) to join the coven and very strange things start happening. Syd starts noticing a black dog around town every time something bad happens. Her mother’s friend seems just like the mean girls she deals with at school. Quaid smirks at her at every opportunity, and gets her thinking about hard she’s trying to fit in.

The longer the Moromonds are around, the weirder and weirder it gets. Her grandmother suddenly begins escaping, which could level the entire town if given enough time. She butts heads with her mother at every opportunity, until she has to get over herself for the greater good of the coven that she’s wanted for so long to turn her back on.

I, Sydlynn Hayle, sixteen-year-old All-American girl, was a witch. Every single person in my life, much to my disappointment fell into that category. Lucky me. Except I spent my entire life wanting nothing more than to be normal, average, ordinary and just like everyone else.

Sydlynn Hayle – Syd wants no part in her magic or the coven, she wants to be released when she’s 18, and wants nothing more than a normal life, but she loves her mother and sister deeply that it is sometimes conflicting

In the ‘real world,’ Meira had to disguise her unusual coloring, her overlarge eyes and cute little horns peeking out of her silky black curls.

Meira Hayle – Meira is the 8-year-old sister of Syd, she clearly sports the visage of her demon heritage, she loves Syd very much and is generally a happy kid

She swept back the hood of her cloak, her long, thick and perfect black hair a flawless halo around her gorgeous face. Her eyes glowed with joy, cheeks flushed from the rush of energy from the coven.

Miriam Hayle – Miriam is the leader of a 100+ coven of witches, she is very strong and powerful and the head of the household in the normal world, struggles with her relationship with Syd

Ethpeal Hayle had once been an influential witch. An evil coven challenged our family. She stood against them alone, cutting herself off to protect the rest of us, but the fight scrambled her sanity.

His chiseled face creased in a soft smile, gentle, even welcoming. My dad was a nice demon.

Haralthazar – goes by “Harry,” is Miriam’s husband and Syd and Meira’s father, he is Demon Lord of the Seventh Plane of Demonicon

His plush, silky fur stood on end, pushed-in nose glistened between eyes snapping anger, plume of tail thrashing against the patchwork quilt as he growled at me.

Sassafrass – a horrible demon teenager the elders punished by placing in a silver Persian cat’s body, called Sass for short

There are several other characters, members of the coven and the friends and enemies Syd makes at school that we meet along the way.

At first I was not too keen to pick up this book and read. It seemed to “out there” for me, considering I have a fine line when it comes to fantasy, paranormal and sci-fi. I wasn’t sure how this was going to go, so I was actually slightly dreading picking up the book.

And once I picked it up I literally could not put it down. I read it entirely in one setting.

Being part of a demon raising is way less exciting than it sounds.

That is the line that got me. I was hooked. Larsen did it all through her character’s voice. Syd’s voice – dripping teenager – is captivating and pulled me along with the story, which was very fast-paced. There wasn’t a moment of pause in the plot, but it wasn’t rushed either. It was paced perfectly and everything that happens happens for a reason.

As much as I suppressed my magic from day to day and refused to use it all, the draw of the coven and my attachment to it made it impossible to deny.

Syd has always tried to deny and ignore her magic despite having to partake in bi-annual coven ceremonies. The trouble is she is also a powerful witch like her mother, and not training herself in how to use her magic properly proves to be catastrophic.

I found it very interesting the world that Larsen built. The witches can feel out one another and know when they are present in the normal world, and they can also have connections to one another or other life forms (such as Syd’s demon father) in other planes.

Syd’s relationship with her mother is an interesting explosion waiting to happen, and it often implodes in on Syd. She hates her mother for forcing her into the coven life, leaving her no real choices, and always blaming and accusing her.

Her sister, Meira, is always there to comfort Syd after these disastrous blow ups. I loved seeing the softer side of Syd with Meira, and later at school with Alison.

My favorite scenes were the ones when Syd was showing great strength of character. She has some precious moments with her mother, shows Alison a different way, has a few moments with Brad, and takes the time to think for herself in some sticky situations with greedy power-hungry traitors.

The book ends with an entire new world of possibilities opening up, and I already started making my own predictions. I am very interested to know what will happen in the future for the Hayle coven, and what other mischief Gram cooks up. I definitely recommend this to paranormal readers, and anyone in a reading slump.

Patti is an award-winning author with a passion for the paranormal. Now with multiple series in happy publication, she lives in Canada with her patient husband and six demanding cats.

THIS EVENT WAS ORGANIZED BY CBB BOOK PROMOTIONS.