This is a weekly meme originally hosted by MizB @ Should Be Reading, but is now hosted by Sam @ Taking On A World of Words. To join in answer the following three questions and hop over to Sam’s and leave your link. 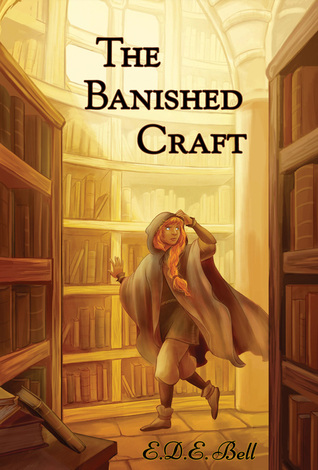 I started reading The Banished Craft by E.D.E. Bell for an August tour. It is the first book in the Shkode series, and I could not pass it up after I realized the cover image was a library.

The Banished Craft is a genre-bending fantasy saga that follows the adventures of Cor, a woman caught in a dying world that does not accept her, and Atesh, a dragon scientist who’s been asked to violate his own ethics or put the lives of his family at risk. Follow their trials as they deal with a shattered world, mired in political upheaval, while they try to rediscover a lost magic. The Banished Craft begins the Shkode trilogy: a quirky and modern take on dragons and wizards, exploring themes of identity, prejudice, violence, compassion, and the ways we are all connected.

By Saturday night I had finished reading the entire Lakeview series by Stacey R. Campbell. The books in the series are: Hush, Whisper, Silence, and Scream.

The storyline starts with Blakely Henry in her journey of self-discovery at Lakeview Academy in Canada. Blakely graduates that year, so the second book follows her younger sister who starts attending Lakeview Academy. There is a short novella between books two and three in which Blakely searches for her biological father, and the final book wraps up Halle’s final year at Lakeview. It is the most exciting of all the books.

I also listened to not one but TWO audiobooks – all the way through! I didn’t particularly care for the narrator of the first book, but I did the second! Agatha Christie is not a new author to me, but Murder at the Vicarage was one of her earlier works. Ally Carter is a new author, although I almost had the opportunity to meet her. She came to my school this past spring! I enjoyed the narration and the story of I’d Tell You I Love You, But Then I’d Have to Kill You.

I’m going to pick up another Angela Carling book next. I was originally going to read this The Secret Keeper back to back with The Secret Sister to have some secrecy going on, but I had to rearrange my reading schedule.

When Seventeen year old Winter Merrill was compelled to make a bargain with the mysterious Secret Keeper, she knew there were rules. The most important one, the next time you have a secret, you will not be able to tell it….even if you try.

What she didn’t know is that her next secret if not told, would destroy her life and the life of Liam, the only boy she ever loved. Can Winter find a way out of the dark bargain that binds her tongue or will her deal with the Secret Keeper bring devastating consequences unimaginable even to her?