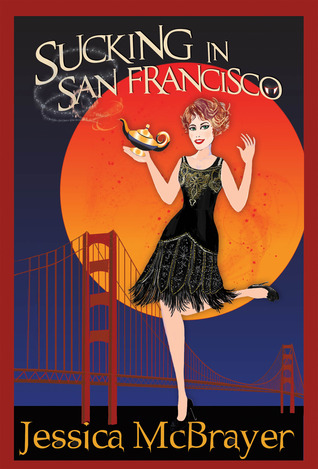 Working at a Suicide Prevention Center in San Francisco, Lily Goodwill thinks she’s heard it all—then she gets a call from a man about to jump off the Golden Gate Bridge. Something about the caller, maybe his yummy British accent or Lily’s ability to understand his crushing ennui, makes her break all the rules and rush to meet him. After all, she is a vampire and if she can’t talk him down she can glamour him.

But things don’t go according to plan. Her caller glows with blue fire and turns out to be a vampire-hating Djinn. Suddenly, for the first time in centuries he’s found something intriguing. Is Lily really a vampire with a conscience and an obsessive-compulsive disorder, involving Handi-wipes and Lysol, or is she just another bloodsucker?

Add in another vampire, with a history of female lovers stretching over three centuries, who swears he’s reformed and declares his undying love for Lily. Stir in a mean pair of witches and a vicious warlock, who are staking vampires around the city, and you have a recipe for riotous adventure of supernatural proportions.

Lily is not your ordinary vampire. She works diligently at a suicide prevention call center. She takes care for everything to be sanitized, even when she feeds. She chooses to live on her own and pay her way, but she is a member of a vampire family who have some impressive skills collectively. They attract the attention of two different people: a jinni bent on destroying vampires and a witch jealously in love. Lily becomes embroiled as the center of attention in more than one heated love triangle as a pair of witches stir up some serious trouble in San Francisco.

Helena – an older vampire who has magical capabilities; married to Julian

Julian – a bookworm and scientist; Helena’s husband; the leader

Sebastian – a brooding, womanizing vampire; lives in the manse with Helena and Julian

Andrew – the young (human) butler at the manse

Iris and Indio – sister witches; intent on no good

Alexander – cousin to Iris and Indio; ring-leader of their schemes

I am not one for vampires at all, so I had some preconceived notions of my own when I decided to give this book a chance. I am trying to give new books new a chance.

Lily belongs to a small family of vampires. Julian, Helena and Sebastian all live in a beautiful mansion, but Lily prefers to be independent and live on her own. It is a distinguishing character trait that runs parallel to the circumstances she finds herself in. Despite her singular spirit, Lily must depend on her friends to prevail.

Odd things have been occurring in San Francisco when Aidan shows up in town. Lily, being the kind-hearted soul that she is, thinks she can save him from himself one night on the Golden Gate Bridge. And that’s where the adventure begins.

Aidan was an interesting character. He is a djinn (jinni) and has lived in solitude for centuries. The breadth of the things he has seen haunts him in a way, and he sets out to hunt down the blood-sucking vampires.

I must be insane. Me, a djinn, destined to walk the world alone or serve in slavery has just let a sworn enemy go. I’ve spent my life destroying vampires. Ever since the Djinn-Vampire war of 917.

But Lily gives him pause. She is different than those he’s known before. Vampires, though, have an incredible power over djinns if given the chance. Aidan

Lilith asked if I had anyone to share my life with. If only I did. I think it would be almost bearable if I did. To have someone to talk to. To hold and touch a physical, willing companion would be like having the sun in my hands. There is no such thing as a female djinn.

There is more than one love triangle in the midst, and it adds quite a bit of spice – and anxiety for Lily – to the mix. Lily is the center of one love triangle, and part of another. This is what puts her in danger: a man loving the wrong woman. Talk about jealousy!

The friendship that Lily and Sebastian have is like that of siblings, and I enjoyed seeing this softer, calmer side of Sebastian. Sebastian and Aidan are competing for Lily, who’s kind of stuck in the middle of it all. She finds herself confused more than once. Aidan’s internal dialogue about Lily is very romantic, whereas Sebastian’s affections seemed…sudden.

Andrew was a breath of hilarity and fresh air. He is human and privy to the vampires’ real lives as their butler, and he is dying to become a vampire. He insists he is at his prime and is relentless in his persuasive attempts.

Things heat up for the vampires in San Fran as they come in contact with Indio, Iris and Alexander start cooking up a wicked plan. The vampire family heavily depends on Aidan’s djinn abilities to protect them all.

My favorite scene in the book is Lily’s birthday at the club. It is 40’s themed, which was around the time period when she was still human. It’s just a really fun scene and it really showcases the witches in a bad light.

In the end, Lily does make a choice. It was predictable but frustrated me extremely. I would not have chosen the same man she did. The only other thing that bothered me was the cliché lamp on the cover. Nowhere in the story does it mention Aidan being associated with a lamp.

The book is the first in the Vampires of San Francisco series. I enjoyed the story and the characters and I’m interested to see what they get into next.

Jessica McBrayer lives in the San Francisco Bay Area. She lives in a house that looks like the prow of a cruise ship and is surrounded by hills too steep for mountain goats, although every other animal seems to make it their go-to place. Jessica shares her home with her husband, her two children, assorted animals and her mother who is a writer too. She is a member of Romance Writers of America.