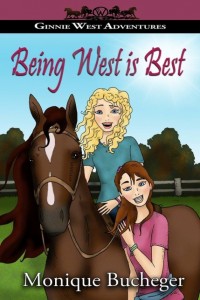 Twelve-year-old BFFs, Ginnie West and Tillie Taylor, are matchmaking geniuses. Together, they maneuvered Ginnie’s widower-dad into proposing to Tillie’s divorcee-mom. Sweet! Certain they are well on their way to sisterhood, each girl is floored when Tillie’s lousy-excuse-for-a-birth-father puts in an appearance after a six year absence. Too bad “lousy dad repellant” doesn’t come in a can.

Even though Tillie’s dad has sobered up and is determined to make amends, Tillie would rather he just disappear again. If he stays, “Operation: Secret Sisters” may need to be renamed “Operation: Not Gonna Happen.”

This is the 4th book in the Ginnie West Adventures series. You can read my reviews of the first three books here, here and here.

Things get heated in the fourth installment of the Ginnie West Adventures!

The girls and Toran have had the moment of their lives: Todd proposing to Amanda. They are all on Cloud 9…until Ginnie and Toran try to cover up a message on the answering machine.

Ginnie blew out a worried breath. “We’ve got a problem, Houston.”

“That’s my line.” Toran’s blond eyebrows scrunched with concern. “What’s wrong? And why is there cake on the floor?”

“That’s the least of our worries.”

Aunt Roni is still in town, and she provides the motherly figure that all of the kids are in need of since Amanda has her hands full with dealing with Tillie, Todd and her ex-husband, Jasper. If Jasper stays around, what will happen to OSS…and Todd and Amanda’s engagement?

“Most people just want to be treated like they matter. Figure out what their ‘honey’ is, and they’ll come around.”

It’s hard on all of the members of the West family, because Jasper used to be just as much a part of the family as Jake and Todd are – adopted in through the love of Uncle Ben and Aunt Sadie. For Jake and Todd, having their “brother” back home after six long years is a bit of a shock, especially when Jasper is adamant about getting his wife and daughter back.

It all but crushes Tillie. Poor Tillie is in a tailspin nearly the entire book, and I can’t say I blame her. I think I would act quite the same if I were in her shoes. Ginnie is also left out of the mix by her father and Uncle Ben. She has always been Tillie’s protector, but this is one issue that Tillie has to come to grips with on her own.

All of the events of those nights of Tillie and Amanda’s life before Jasper left have all been told through the eyes of Tillie in each of the books. As children, we often see things a certain way, and, like with selective hearing, see and remember what we choose to, sometimes through no fault of our own. Sometimes we disremember things that happened and how they happened…and this is one of those things Tillie has to understand in order to move forward. All these years she’s believed that her father left, that he didn’t want her: he threw her away. Discovering how deep a parent’s love for their child is – and the sacrifice that one will do to keep their loved ones safe, even from oneself – is hard for young Tillie to accept.

“Being a father isn’t about bossing and intimidating your kid. It’s about teaching him how the world works.”

Jasper isn’t the only visitor to the West farm. When things seem to have settled a bit, the former bully that Ginnie, Toran and Tillie have befriended shows up with his frightened mother – and gives Jasper and Tillie their own moment to shine and put some of the pieces of their love back together.

“Maybe people should listen to their inner twelve-year-olds – or better yet, to their daughters.”

With all that’s happened, and Aunt Roni by the family’s side, Ginnie gets a promise from her father that renews her faith in him, her family, and will reunite her with the mother she so yearns to know better.

“Dad, Dad, Dad,” Ginnie teased, shaking her head in mock pity. “Why don’t you go back to being an ostrich and iron your tuxedo or something?” 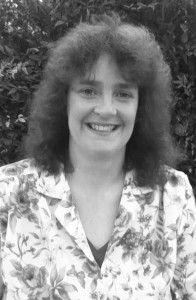 When Monique Bucheger isn’t writing, you can find her playing taxi driver to one or more of her 12 children, plotting her next novel, scrapbooking, or being the “Mamarazzi” at any number of child-oriented events. Even though she realizes there will never be enough hours in any given day, Monique tries very hard to enjoy the journey that is her life. She shares it with a terrific husband, her dozen children, sons-in-law, and adorable grandchildren, cats, and many real and imaginary friends. She is the author of the Ginnie West Adventuresseries, picture book, Popcorn, and plans to write plenty more.

Mikey Brooks is an author/illustrator that specializes in children’s art. His picture books include the best-selling ABC Adventures: Magical Creatures, Trouble with Bernie and Bean’s Dragons. He is the illustrator of several picture books such as Popcorn by Monique Bucheger, Bongo Flo by Carolyn Quist, andLucius and the Christmas Star by Jim Long. He is the author of The Gates of Atlantis: Battle for Acropolis, The Stone of Valhalla the best-selling middle-grade series The Dream Keeper Chronicles. You can find more about him and his books at: www.insidemikeysworld.com

2 thoughts on “Review: Being West Is Best”