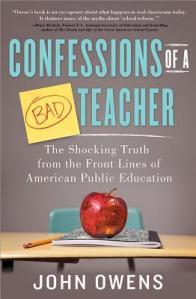 Confessions of a Bad Teacher: The Shocking Truth from the Front Lines of American Public Education by John Owens (Sourcebooks, 2013)

John Owens is an editor, journalist, and photographer. Formerly, he was the Senior Vice President and Editorial Director at Hachette Filipacchi Media, where he oversaw brands including Road & Track, Popular Photography, and Travel Holiday. He has made more than 100 national media appearances, including Good Morning America, CBS This Morning, CNN, FOX News, and NPR’s All Things Considered.

“John Owens’s book is an eye-opener about what happens in real classrooms today. It shatters many of the myths about ‘school reform.’” —Diane Ravitch, former U.S. Assistant Secretary of Education and bestselling author of The Death and Life of the Great American School System

Author John Owens left his lucrative publishing job in Manhattan to teach English at a public high school in New York City’s South Bronx, the nation’s poorest congressional district. He thought he could do some good. Faced with a flood of struggling students, Owens devised ingenious ways to engage every last one. But as his students began to thrive under his tutelage, Owens found himself increasingly mired in a broken educational system, driven by broken statistics, finances, and administrations undermining their own support system—the teachers.

“Everyone claimed that the kids were the top priority,” says Owens, “but the students were just cast members of a bizarre, heartbreaking drama that only looked like education.”

The situation has gotten to the point where the phrase “Bad Teacher” is almost interchangeable with “Teacher.” And Owens found himself labeled just that when the methods he saw inspiring his students didn’t meet the reform mandates. With firsthand accounts from teachers across the country and tips for improving public schools, Confessions of a Bad Teacher is an eye-opening call-to-action to embrace our best educators and create real reform for our children’s futures.

“Billionaires blame teachers for America’s educational problems and throw money at ‘fixing’ our public schools without understanding the dynamics of teaching,” says Owens. “Public education is a precious part of our democracy. Our families, our future, and our country are paying an unbelievable price as ‘reformers’ dismantle an education system that once was—and still should be—the envy of the world.”

As Owens points out in Confessions of a Bad Teacher, the real issues in American public education include:

Here is what one fellow NetGalley reviewer had to say about Confessions of a Bad Teacher:

“This is my school, this is my experience, this is my career. And it’s all laid out far more succinctly and calmly that I could ever have done. This book is going into the school library if I have to pay for it with my own money. The teachers (and parents, if any of them pick it up) have got to see that what we are going through isn’t just us, it isn’t just an isolated situation. God bless John Owens, where ever he is.” –  Allison Dollar – School Librarian, Gallup, NM

3 thoughts on “Coming Soon: Confessions of a Bad Teacher”