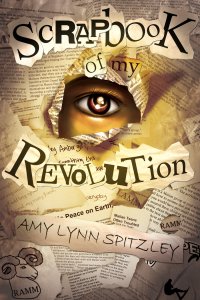 *Author’s Note: This book contains some controversial topics, and is centered around race. I have made some references to past historical figures or events in connection with some things that happen in this book. I do not support these past historical events. I, like the main character Amber, believe in equality for all.

I may as well say it up front. I’m Malian. Yeah, one of the freaks. I’ve got gold skin and the ability to read emotions. It’s great fun, too, believe me. Yeah, right. Anger. Frustration. Desire. Try reading those all day. But I’m not the only one who’s frustrated. We’re all mixed-up and sick of the bad press and attacks and everything else from Regulars. Things are changing, though. I’m getting other Malians in my school together. We might be able to show people that we’re just as human as they are…unless one of my best supporters is really public enemy number one. (Amazon)

Amber is a Michigan teen…but she’s no normal teen. She is Malian – a human with various and unusual skin tone shades, who also possess a supernatural ability. There are four types of Malians: Sensitive, Athletic, Camo, Manipulative. Each type, by definition, is extremely broad:

Sensitive – Any Malian whose skills lie in the mental region.

Athletic – Any Malian whose skills lie in the physical region.

Camo – Any Malian whose skills lie in the ability to camouflage themselves.

Manipulative – Any Malian whose skills lie in the ability to change the environment.

There were tons of ways for each “talent” to manifest itself, and each kid born seemed to have their own way of doing things. The kid down the street…could talk to animals, but technically she was a Sensitive like me.

Amber is unhappy not being a Regular; being different and being an outcast, with no explanation why, is a hard thing for a teen to digest. Even harder when you can read the feelings of your parents, and those feelings contradict their words. She is a Sensitive: she can read the emotions others around her feel. It is frustrating because she just gets the emotion, not the reason for the emotion. Kids at school often abuse this ability. It is very awkward when kids ask what the captain of the basketball team is “thinking” – and he’s thinking he has a crush on the math nerd across the room…who’s a boy. And the math nerd is totally homophobic. What’s a girl to say?

But what’s more is that Amber is golden. Like a walking goddess dusted in gold. She attracts the attention of all the boys in school, who Desire her. Some of them are quite crude. Being a Malian and being a teen Malian is not an easy road, and it has manifested in Amber. She is not one for crowds, given her ability – but it’s hard to run around with her cousin Bree, who is insistent and pushy and slightly manipulative. She does it out of love, but sometimes she just doesn’t know when to let up.

The book is aligned almost with the beginning of the school year, kicking off with Amber’s birthday, and ending that same time the following year. Her Regular cousin, Bree, gives her a scrapbook to document meaningful things that year. The entire book was laced with newspaper clippings, receipts, notes, fliers and drawings, just the kind of things that Amber would put in the scrapbook Bree gave her for her birthday. After a couple of chapters it hit me like a Mack truck that the book is the scrapbook!

The principal of Amber’s school is of course a Regular, and is fearful of offending her Regular school population….causing her PC-ness to be discriminatory and honestly, racist, toward the Malian population. The previous year, an incident happened downstate at a high school gathering, which caused a riot between Regulars and Malians, dubbed the Grand River Halloween Riot. Jonny Marino, a Malian high school student, was blamed for the riot and expelled from the school. Turns out, a friend of Amber’s knows Marino, who shows up later in the book and causes quite a stir.

Given that back history, Principal Bardha has banned any kind of face or body paint at the upcoming Halloween dance, held every other year. Bree is justifiably infuriated about the principal’s fear and strict line of PC-ness, which is discriminatory to Malians. Bree and Amber both decide to take a stand to this discrimination: Bree dresses as a china doll with pale face paint and rosy red cheeks, and Amber dresses as an Amazon with minimal face paint and a few bands around her arms – which leads to a confrontation with Bardha and a dramatic Golden Goddess model walk that drops jaws. But we learn that other Regulars and Malians also took a stand and defied the principal to stand up for their rights, which is a big component of this book.

After the dance, while with Amber and Bree, a Malian friend is assaulted by a young, Regular boy. The girls all chase him and his friends down the beach, bellowing hollow threats. Bree is insistent that they report the incident to the police…but who would the police believe? It is a very real situation that women everywhere face: who’s going to believe me? It’s a hard thing to face, and it brings to light the very issues Amber and her fellow counterparts face in a world that is not only unaccepting, but fearful.

Everyone was waiting to see what we’d become…including us.

Additionally, a well-supported group, Regulars Against Malian Menace (RAMM), has formed and is very outspoken about their hatred of the Malians, the first generation of which are now Amber’s age. The RAMM leader uses terms like “The Malian Situation,” how Malians need to be “cured,” “eradicating the problem” and Malians being an “afflicted people.” So, the fact that Malians are a new make-up of the population is another hard thing Amber and her counterparts must face. It’s also scary to have someone saying such hateful things…things that the country had seen before with the Native Americans, and settlers nearly effectively eradicated them. And then there was slavery. It’s not hard to imagine how Malian teens feel about their future. and how they see things going down. The leader of the Michigan RAMM base is Abraham Baronson (ironic, no?), who has said the President is handling the situation with “kid gloves,” but the President is now requiring voluntary testing of Malian genetics…I’m not so sure how “voluntary” this movement is, and Amber and other Malians aren’t sure what they’ll find.

You wanna fly a kite?

And as always with YA dystopian fiction, there is always a kind of love triangle, one guy stuck with the old and one braving forward with the new. We’ve seen it in the popular series Uglies and Hunger Games. High school friend Cam (a Camo) is very quiet and hides in the shadows, and of course Jonny is an outgoing, outspoken rallying figure for political change for Malians. Cam is the one guy in school who has never overtly ogled Amber with Desire. Jonny is the kind of guy Amber is unsure if she can trust. There’s just something about him. Was he an innocent bystander at the Grand River Halloween party….or did he do something more, as prosecutors claim? There’s something sinister about him that doesn’t meet the eye.

Right before Christmas, an article is published alluding to the building ideas of the RAMM supporters, and the Malians – that both sides are building supporters…and warriors? The reporter states peace is no longer going to reign in the world, but that something akin to a war is brewing. Amber decides to do something before others do it and ruin it. She decides to start a Malian awareness group called Lake Michigan Malian Supporters, LaMMS.

Lambs and rams. Which one seems more gentle? Which one seems more…battering? Which image do you sympathize with – a gentle lamb or a battering ram? I don’t find Spitzley’s use of this a coincidence, although it is intended to be coming from Amber. But LaMMS puts Amber on display for all the world to see – and makes her an easy target. Seems it isn’t the first “incident” of Malian-directed malice by Regulars. With a rash of outbursts, beatings, break-ins (and who know’s what all else going unreported) against Malians, what does this hold for their future?

Even a revolution can start small.

Heads Up: this book does contain “foul” language. This book takes on a lot of controversial topics: evolution, superiority, fear, malice, anger, judgement. The book is divided into two sections, the first Innocence and the second Revolution. Those titles are very indicative of Amber’s attitude toward Jonny Marino.

After reading two pages on my Kindle, I didn’t think I could continue reading due to the smaller-than-normal font, in combination with the font text style. It was really hard on my eyes. But by page two I was into the story. Who cares about your eyes? Besides that, the only other thing that bugged me was the blatant overly conversational style of writing that Spitzley picked for this novel. I understand that this is a technique employed to connect with the YA audience, but I feel like it is catering too much to the kind of teens (like my brothers) who eye roll and mutter under their breath to friends after an adult speaks to them; the kind of kids who exude senses of entitlement. I don’t think that’s a positive. There were many sentences that ended with “you know?” and it just kind of turned me off, and it somewhat alienates non-teen readers.

Amber experiences a lot of growth in such a short time. She has matured past her young age, and her friends are following suit. They are walking a very fine line to promote their cause but not create waves. She realizes mistakes she’s made, and she tries to fix them and not make those same mistakes again. She is a natural leader, and a great role model. She has evolved as a person, used her influence for good, and she’s warmed and strengthened her relationship with her parents. I hope Spitzley’s YA readers see the changes in Amber from beginning to end, and the strong character she has become.

I definitely see a series in progress here. I don’t think this is the end of Amber and LaMMS…or of Jonny Marino.

One thought on “Book Review: Scrapbook of My Revolution”