Welcome to the my stop for Bread of the Dead, the first book in the Santa Fe Cafe series by Ann Myers! This is a cozy mystery series and the tour runs September 28-October 23 with reviews, interviews, guest posts and excerpts. To check out all of the Dia de los Muertos fun, check out the tour page. 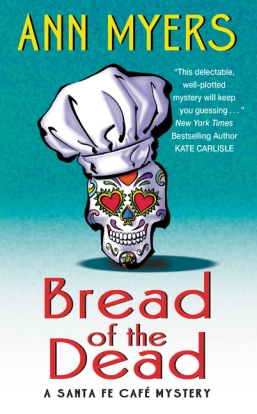 The Day of the Dead is approaching in Santa Fe, New Mexico, and cook Rita Lafitte is busy decorating sugar skulls, taste-testing pan de muerto (bread of the dead), and refashioning her post-divorce life. She loves her job at Tres Amigas Cafe and feels like she’s found a good home for herself and her teenage daughter…until her kindly landlord is found dead next door, seemingly from suicide. Although Rita discovers evidence of murder, the police aren’t convinced, especially one of the lead detectives who’s also Rita’s ex-husband. To uncover the truth behind her friend’s death, Rita teams up with her octogenarian boss Flori, the town’s most celebrated snoop. Soon, their investigation encompasses other crimes, including break-ins and the murder of their number-one suspect. Rita won’t feel safe until the killer is caught. But when she unearths a long-buried secret, will she become the next victim?

Rita is trying to manage her life post-divorce in Santa Fe. She is a chef at Tres Amigas Cafe, where she has made great friends with her boss and also with her landlord. Despite those positive influences, she is struggling with her teenage daughter and her ex’s egotistical and condescending remarks. When her landlord turns up dead, Rita doesn’t believe it was suicide. Her bloss Flori masterminds a not-so top-secret investigation. Rita is slightly on edge as they dig deeper and uncover other crimes…and another murder.

Rita – she is a slightly scatterbrained chef and mother to Celia

Gabriel – Victor’s brother; shares a divided house with him

Based on the cover and artwork I assumed this would correlate to the Mexican holiday Day of the Dead.

The setting is quite ripe to have murder rise to the top! The Mexican holidays for Day of the Dead are celebrated over the course of a few days at the end of October and beginning of November. I thought I was pretty well-versed in this custom (thank you Mrs. Ramirez, 7th and 8th grade Spanish), but the way the characters talk about the altar gifts and those being honored, as well as talking about poor Victor in death brought more meaning to me as a reader and made the custom’s presence in the book more sincere and purposeful.

I thought Rita was a little scatterbrained as a character. She’s working hard both at work and at home, trying to keep her daughter Celia on an even keel. It’s not easy either, with an ex-husband like Manny. Rita’s descriptions of people and events also added a flair of humor to the increasingly complex investigation.

I felt awful. Here I was, surely failing another friend test. A good person would have bounded right into the nice-old-man/psycho killer’s hut to support her friend, right?

Flori is absolutely hilarious! There is no filter with her character, and given her age, personality and demeanor as the center of the quintessential gossip mill (thanks to her friend with the police scanner) she can get away with these things.

“Rita’s loosening up,” Flori replied with her usual knack for sounding inadvertently inappropriate.

“I see that.” Jake’s smile, accompanied by a wink, didn’t help my composure.

Flori is one of the incredible draws of the book. The more I read, the more I wanted to know what crazy and outlandish thing she would do next, and what was going to come out of her mouth next! I can say I want to be more like her! Flori is obsessed with the Day of the Dead baking contest and has it down to an art.

She probably heard as soon as the police call went out. The keystone of her gossip network was a ninety-year-old wheelchair-bound man with a police scanner. He had chronic insomnia and spread news faster than high-speed Internet.

There were so many scenes in the book that I loved. One of the best scenes was when Rita, Cass and Flori discovered one another hiding out in someone else’s pantry while at a party. They all were scoping out for their investigations.

I was pleasantly impressed with the character growth in Rita’s daughter, Celia. She started out as a loathsome, angsty, ungrateful teenage girl who did nothing but give her mother grief, and by the end of the novel she is a completely different person.

This is a wonderful read filled with interesting characters with their own little issues to handle, but the ultimate goal is solving Victor’s murder. The characters are relatable with real vices, and their individual voices ring with honesty as a testament to their personalities. The timing couldn’t be more perfect for a fall reading, and I am looking forward to what Rita and Flori encounter next.

Ann Myers, her husband, and extra-large housecat live in Colorado but, like Rita, feel most at home in Santa Fe.

14 thoughts on “Review + Giveaway: Bread of the Dead”