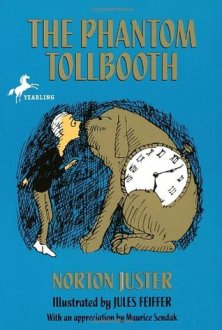 For Milo, everything’s a bore. When a tollbooth mysteriously appears in his room, he drives through only because he’s got nothing better to do. But on the other side, things seem different. Milo visits the Island of Conclusions (you get there by jumping), learns about time from a ticking watchdog named Tock, and even embarks on a quest to rescue Rhyme and Reason! Somewhere along the way, Milo realizes something astonishing. Life is far from dull. In fact, it’s exciting beyond his wildest dreams. . .

I had never read The Phantom Tollbooth as a child, and I had no idea what my students and I were about to embark on this past year while reading.

Milo is not your typical boy. No, he doesn’t find joy or even contentment in anything. Everything is boring and useless. What is this life even for? Until one day he arrives home to find a tollbooth waiting with a manual and coinage, ready to take him to the Kingdom of Wisdom. Through a series of adventures and characters along the way, Milo travels around the kingdom and is soon tasked with rescuing twin princesses Rhyme and Reason. Nothing has been the same in the kingdom since they were banished, and many want them to set things to rights.

Milo – a young boy who is utterly bored with everything in life, nothing satisfies him or even slightly makes him content

The Humbug – a bug who can never make up his mind and is in general disagreeable, sometimes a hindrance

You must never feel badly about making mistakes … as long as you take the trouble to learn from them. For you often learn more by being wrong for the right reasons than you do by being right for the wrong reasons.

Norton Juster is an architect and planner, professor emeritus of design at Hampshire College, and the author of a number of highly acclaimed children’s books, including The Dot and the Line, which was made into an Academy Award-winning animated film. He has collaborated with Sheldon Harnick on the libretto for an opera based on The Phantom Tollbooth. The musical adaptation, with a score by Arnold Black, premiered in 1995. An amateur cook and professional eater, Mr. Juster lives with his wife in Amherst, Massachusetts.

12 thoughts on “Review: The Phantom Tollbooth”