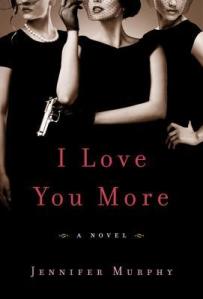 One man, three wives, the perfect murder. A scintillating novel of betrayal and conspiracy.

Picasso Lane is twelve years old when her father, Oliver, is murdered at their summer beach house. Her mother, Diana, is the primary suspect—until the police discover his second wife, and then his third. The women say they have never met—but Picasso knows otherwise. Picasso remembers the morning beautiful Jewels showed up at their house, carrying the same purse as her mother, and a family portrait featuring her father with two strange boys. Picasso remembers lifting the phone, listening to late night calls with Bert, a woman heavily pregnant with Oliver’s fourth child. As the police circle and a detective named Kyle Kennedy becomes a regular fixture in their home, Picasso tries to make sense of her father’s death, the depth of his deceit, and the secrets that bind these three women. Cunningly paced and plotted, I Love You More is a riveting novel of misplaced loyalty, jealousy, and revenge.

I Love You More reminds me in some ways of The Three Little Pigs. Each  piggie is one of Oliver Lane’s wives, while he quite clearly manifests as The Wolf. Reality, perception, and lies were integral to each of the characters in this book.

Oliver Lane tells each of his wives lies. The biggst of all? “I love you more than life itself.”

Sneaky Oliver winds up murdered during a family beach vacation with his first family. Leading a triple life leads to no lack of suspects.

This novel is told in various perspectives, and begins with Picasso, Oliver’s first child. Picasso knows her mother has been behaving out of sorts and begins her own PI work. Like one of the wives discovered, she finds out about her father’s other two families.

Detective Kyle Kennedy is also in hot pursuit on this unusual case, and there are chapters for all of the wives. Oliver also has his own chapter, which shows beyond a shadow of a doubt that he was most definitely a sociopath. Like her father and all the adults in her life, Picasso learns how to expertly lie herself.

This book was thrilling and kept me turning pages to find out what bizaare thing would happen next or what the next lie would be. One thing that endeared me in this highly sensational story was that the wives’ circumstances were life-shattering, and yet they developed strong bonds. I highly recommend! The ending was not predictable as is often the case in a mysterious book.

I don't have time for some app's bullying. Fastest uninstall I've ever done. BS. Bye, Felicia! 👋
A MUCH better trainer than we had last year when we first got our Cleartouch panels. Nothing makes me more frustrated than having to use something and not fully knowing how because the training was crap. Year 2 is getting an upgrade!
All up on Granny for protection cause the mean momma took them to get baths and grooms. Baby went two days ago and is still pouting and mad Poco went today and she didn't. 🙄
This past week I decided to officially bring back my book blog to life. It has been almost 3 full years since I had to walk away from it due to the stresses and demands of being a teacher. Today I am writing my first review and it makes me want to read this one all over again! #bookblogger #writingreviews #wordpress
F*ing EVIL. I've downgraded from wearing my hoodie. #tabithathetricolor