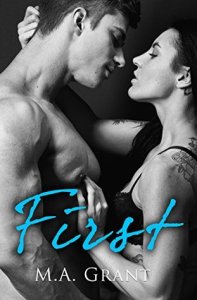 Maya and Cat have been there for each other through thick and thin, the good and the bad, the laughter and the heartache. But with college graduation on the horizon and real life looming, they find themselves facing an uncertain future: one where not even friendship can save them from confusing choices, bad decisions, and the risks of falling in love.

Maya knows that love only leads to pain, and the best relationships are short—one night short. But after waking up with Jake, her best friend’s older brother, in her bed, suddenly things aren’t as cut and dry. Cat and Jake are close, a tight unit since their parents’ death, and Cat will never forgive her if Jake gets hurt. Jake is a firefighter, and is used to running into flames—not away from them, and Maya can’t seem to resist. But she’s already decided her future, and it’s far away from here. The only way to get what she’s always wanted is to burn every bridge behind her, and destroy the possibility of a future with the one man she may be willing to love.

When Cat Jacobs’s parents died while she was in high school, her brother’s best friend Dallas Miller was there to help pick up the pieces. Several years and a looming college graduation later, Cat’s motorcycle-riding, tattooed knight is about to ride off into the sunset—and leave her in his dust. She only has six days to convince him to fulfil her secret fantasy of having him for her first before he’s gone forever. She’s stubborn and he’s tempted, but this is a battle for more than just some time in the bedroom—it’s a fight for both their futures.

Two novellas tied together with the same characters. I loved both stories, but I wish Grant had taken both storylines and developed them into their own full-length novels.

Jake is Maya’s BFF’s brother. She has always acted condescending and snide toward him. Meanwhile, he’s had a crush on her since forever and continues trying to be nice to her and chalks it up to the fact that she just hates him. One night they get drunk at a bar and wind up arguing about their one-night stand. Maya swears it won’t happen again.

Jake had to grow up too soon. His parents died, he was 19 and had to grow up and be his sister Cat’s guardian. He chose to become a firefighter and put everything in his life on the backburner to be a parent to Cat.

I didn’t particularly like Maya’s character. She was real bitchy and just an overall jerk. It was hard to see how Jake kept trying to be nice to her.

Dallas (nickname Dally) is Jake’s BFF. Cat is Jake’s baby sister. Their story made more sense to me. When Cat’s parents died, Dallas moved back home. And he’s been in love with Cat ever since. Cat is now of the age where she’s done with being a virgin and sets her sights on Dallas to teach her what she needs to know. She is relentless on the warpath. Dallas refuses at every turn, even though he would like nothing more, because Jake would straight kill him. Plus, he’s moving back to Arizona now that Cat is grown and Jake doesn’t need as much support any longer.

Dallas finally gives in and agrees. But things do not go according to plan, and the one person who needs to not know nothing discovers everything.

Cat and Dally had a playful, close relationship that I enjoyed seeing bloom from their individual sides to growing together. An endearing, cute couple that made for a great read. 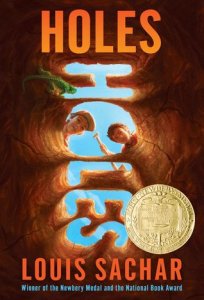 Stanley tries to dig up the truth in this inventive and darkly humorous tale of crime and punishment—and redemption.

Stanley Yelnats is under a curse. A curse that began with his no-good-dirty-rotten- pig-stealing-great-great-grandfather and has since followed generations of Yelnats. Now Stanley has been unjustly sent to a boys’ detention center, Camp Green Lake, where the warden makes the boys “build character” by spending all day, every day, digging holes: five feet wide and five feet deep. It doesn’t take long for Stanley to realize there’s more than character improvement going on at Camp Green Lake. The boys are digging holes because the warden is looking for something. Stanley tries to dig up the truth in this inventive and darkly humorous tale of crime and punishment—and redemption.

My kids have come up with so many predictions as we read through the book. Some of them were pretty wild (but still valid) and some were pretty great connections based on things we knew.

This was my first time reading Holes, which many of my kids didn’t believe. The story of Kate and Sam was so touching and heartbreaking. The intertwined plot lines were done wonderfully. A MG book I definitely recommend!

The Sunday Post is a weekly meme hosted by Kimba @ Caffeinated Book Reviewer. It is a weekly news post to recap the past week on your blog, showcase the books and other goodies you’ve received, and share news about upcoming events on your blog. Be creative and personalize it! To get in on the Sunday fun day, see the rules here: Suday Post Meme.

I have been gone again. I think this is going to be my life until something changes for me at work. As in teaching a different subject. And I have a plan for that. It was a light bulb moment on Tuesday. If this change ends up happening for me next year, it will solve all of my problems with the struggle between professional and personal life and I wouldn’t have to sacrifice my beloved yearbook kids and could walk out the door at 4:00 every day. And with this change, the 6th ELA team can have full classes instead of one less due to one of mine having to be yearbook, so smaller classes! Win for everybody.

I have been very overwhelmed the past two or three weeks with my admin and the 938202 things I have to do in the behind-the-scenes parts of my job as a teacher. I have all the advanced classes, one on-level class (that in reality NEEDS to be a co-teach class), and my yearbook class. I am struggling planning on my own because what I do for my ELA kids is different than my partner, who does have almost all co-teach classes, and don’t feel as connected with teaching anymore. I feel like an island under attack – and I’m fed up with feeling this way again. I thought that was gone with our last principal. As an elective, nobody cares what you’re doing or critically critiquing every second of your lesson and interaction with your students. That’s the direction I want to go in in the media world because I love yearbook and that is where my passion now lies.

I am in love with my kids this year, mostly. My advanced students are really motivated and enthusiastic and just fun. My non-advanced class is like a zoo full of monkeys in paper cages with their tails on fair in the middle of a tsunami. And then I have my yerds who are fabulous. Sadly, I am losing two of my staff soon due to moves. I have also lost two advanced students and one moved classes. Thankfully, that now makes my max number of students in two classes 33. I was able to move out two desks on Friday. People will actually be able to get around my room!

I recently saw one of my favorite bands, Restless Heart, with my mom. We are also traveling – with all my doggies – to Tennessee for Thanksgiving with my middle brother. We have the Suburban booked. I can’t wait! I took my mom out for her birthday Friday night and spoiled her with gray Isotoner gloves like she had when I was growing up and an opal necklace to match the ring we bought in Mexico last summer.

My coworkers at school keep making fun of me (and complimenting me) because I’ve lost 40 pounds and my pants won’t stay on! I want to continue to lose 45 more and get with my doctor about a new medication for my anxiety and depression that might also aide in weight loss.

I am continuing to try to make improvements with my house. By divine intervention, yesterday morning I was able to get an entire pallet of emerald zoysia sod for $175. My dad and I spent the day laying it. He pulled out two of the bushes my mom hates, but the rest have to be removed with the chainsaw at a later date. He also pulled out the oleander that I’ve wanted gone. My mom and I have already made plans and done finally measurements on fixing (and expanding) the fence for the backyard and adding a 10’x10′ dog kennel so I can put the crazies outside for a few hours at a time in a safe, enclosed space. The next thing on my list is really pushing my landlord to remove the two dead trees – both alarmingly close to the house. One will definitely require a professional, as the limbs are all entangled in 8 different power lines that run alongside my house. And it is leaning, so eventually it’s going to rip down those lines.

I have been so bogged down this year that I haven’t even picked up my book since I don’t know when. I want to finish this novel, but it was a bit of a struggle for me getting through the beginning. Our school also received some free copies of Gordon Korman’s novel RESTART. I am planning on reading it because he is coming to our school on October 29th!

I don't have time for some app's bullying. Fastest uninstall I've ever done. BS. Bye, Felicia! 👋
A MUCH better trainer than we had last year when we first got our Cleartouch panels. Nothing makes me more frustrated than having to use something and not fully knowing how because the training was crap. Year 2 is getting an upgrade!
All up on Granny for protection cause the mean momma took them to get baths and grooms. Baby went two days ago and is still pouting and mad Poco went today and she didn't. 🙄
This past week I decided to officially bring back my book blog to life. It has been almost 3 full years since I had to walk away from it due to the stresses and demands of being a teacher. Today I am writing my first review and it makes me want to read this one all over again! #bookblogger #writingreviews #wordpress
F*ing EVIL. I've downgraded from wearing my hoodie. #tabithathetricolor