Self Care Isn’t a Want

Well, we are eight months in and just yesterday I realized something about me. Something I’ve been doing with this whole self care life – and it all hit me with a visit to my chiropractor.

The last day of July I hauled out case after case full of old yearbooks (prior to my time as advisor) that never sold. Boxes that went back to 2007. And there were 2 cases for almost every academic year. I also completely unpacked my classroom, pulling down boxes and boxes of books that my mother put onto my bookcases. I made a few new changes to furniture arrangement – all of which had to be moved as the janitors just shove everything back in wherever. By the end of the night, as the big jobs started winding down to the smaller details of unpacking my desk and cabinet and setting up and rearranging and organizing, my left hip began hurting pretty bad. As the night went on and I left and went to the grocery store, I was literally hobbling. Using the cart as a support. The pain was excruciating.

This isn’t just a one-time thing, like throwing your back out or a sudden injury. I have permanent back damage. When I first started teaching 6 years ago, I was barely making it through my days at school. I called my chiro’s office one day during my conference in tears the pain was so bad. I have a scoliatic curve that was never diagnosed in all of those school health screenings. My spinal column also is not straight. It is twisted, like a helix. Like DNA. Additionally, where the spinal column meets the base of the skull, mine is not rounded as it should be for that natural curved connection. It is 100% straight. In my consultation I had circled EVERY single part of the spinal column as places I had pain. I joked to my chiro that I had circled them in groups for what hurt in the different areas.

I explained that I had back pain ever since I hit puberty, and my mother dismissed it as just soreness from being an athletic kid in sports. I was forewarned that it might be permanent…and about half of of it is. In my X-ray below, the black line is where the center of the spine should be. The red curve to the left is where it actually was.

I did 4 months of intense PT, adjustments, exercises and I DID change my spine as much as it was possible. It wasn’t easy and it wasn’t fun. It is actually painful in the beginning because you are forcing your spine to change. It doesn’t like that one bit! However, this is proof that chiropractors are NOT quacks and that chiropractic care is real health care. Just look at my after x-ray.

I set my Temperpedic to the most intense settings as I went to sleep. I repeated that when I woke up. I got dressed and did something with this awful hair of mine. (That’s an entirely different story – and one I AM self-caring for.) I made the conscious decision I needed to ditch my purse. I know it had to weigh somewhere close to ten pounds. I had already decided on this move – I HATED carrying it. I downgraded to a messenger purse so I could wear it across my body and not have it in the way or dragging down one arm. I did a thorough cleaning out and ditched my old granny wallet that I loved but was just holding so much I didn’t need to carry with me and I set off for the chiro office.

I always have trouble with my thoracic. When it starts locking up, I can’t move. I literally can’t move but mere centimeters. Forget using your arms or torso in any way, and I might be petrified that way for life if I bend. Even with adjustments, the thoracic is a grudge-holding ass and won’t cooperate. It has always taken multiple visits close together to get it unlocked. But August 1st was a day to be reckoned with. It was THE best adjustment I have ever had. Everything cooperated well as it should, which is rare in a solitary visit. I felt immediate and overwhelming relief.

As I left the office and drove to lunch, I realized something about my own self care practices. I was only doing self care based on MY own wants. Just like The Spoon Theory below, I use A LOT of spoons every day. Being a teacher, I use more spoons than are on that chart altogether. It is a highly stressful, impossible, thankless job. (Impossible in the sense of unrealistic expectations.) When I come home, I am already so negative in spoons that by the weekend, getting dressed and brushing my teeth is a struggle sometimes, let alone anything else. 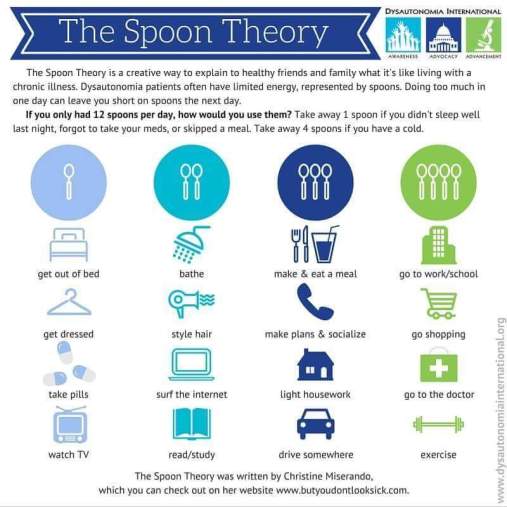 Being spoon deficient, I do things slowly and one at a time. It might also be why I never feel I am making progress these days, but I have to live with that. But part of that is what I’m talking about. I only do self care on my own terms – what I want. Not what I need. I actually am ignoring my real needs, like consistent chiropractic visits. Instead of going monthly as I should just for maintenance, I go only when I am in pain. Well, girlfriend, you don’t feel back pain until you’ve already gone through 80% of it. Y’all. Eighty. EIGHT. ZERO. Percent. When you feel back pain, you are in the upper 20%.

I was hit and had a hard realization about myself and what I am pretending is self care. It is not on your terms. It is not wants. It is NEEDS. Yes, my monthly visit to the nail salon is both – I literally need a knowledgeable professional to take care of my ingrown toenails or else it becomes painful and I might one day obliterate my toes. I also look pretty, which raises my confidence. I get my want and my need is met. So why could I not see that in other areas of my life with self care?

I can’t keep sugar coating it for myself.

The other part of this is indulgence. Self care is not indulging yourself, which I have been doing all summer. I was on a good track in April and May. Then when life change happened, I got off and refused to get back on. I don’t know why. But I kept self-indulging all summer pretending that my treating myself was self care. It’s not. I wasn’t doing myself any favors. It wasn’t just a want. It was far beyond down the scale to outright indulgence.