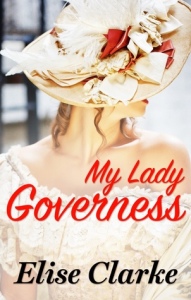 One knight, one runaway heiress, one rollicking romance: A breath of fresh air in Regency romance!

Proud and haughty, Lord de Waare is almost as medieval as his castle…until he accidentally abducts a governess, who turns out not to be a governess at all, and who shows this knight that his heart is not as armoured as he thought.

A girl with a dangerous past, Marina would happily disappear again, but since de Waare won’t let that happen, then the least he can do is help her clear her name. But moving back into society is dangerous for her and for the stern man she’s coming to love. She knows the rules of honour and society, and she won’t allow de Waare to compromise the principles that define him.

Marina Frome, governess to Lady Kemp’s three daughters, was a great fan of Jane Austen, but whilst she agreed about the young man in want of a wife, she thought that at present there were other universally acknowledged truths that were rather more important. Such as, a single man in possession of a good fortune must face unbelievable sycophancy wherever he went. Or that the marriage mart was a singularly cut-throat business. Or, most strongly of all, that were was nobody as blind as an ambitious mama – as was being shown to her right this minute in the drawing room where she sat in the corner, one beady eye on her charges.

Lord de Waare swung on his heel, managing not to reel too much, everyone still frozen. Then he swung back. He swung back and pushed his face close o hers, snarling, “Nobody talks to me like that,” and the next moment Marina left the ground and was being taken at speed down the passage over a very broad shoulder.

Never trust a woman whom no other woman can stand.

First Chapter/First Paragraph/Tuesday Intros was created by Bibliophile By The Sea and is now hosted by Vicki @ I’d Rather Be At The Beach. To participate, share the first paragraph (or a few) from a book you’re reading or thinking about reading soon. Link up HERE.