Beyond the Books is a weekly meme hosted by Karen @ KissinBlueKaren. Each week features a new topic (mostly non-bookish). This meme is a fun, social weekly post.

Cinco de Mayo is a celebration of the Mexican Army’s victory at Battle of the Puebla on May 5, 1862 during the Franco-Mexican War. It is commonly mistaken for Mexico’s Independence Day, which is actually September 16 and happened about 50 years prior. Cinco de Mayo is actually a minor holiday in Mexico. For most Mexicans, it is a regular day. It is not a federal holiday, so all government offices, banks, and stores remain open.

I feel like Cinco de Mayo is more celebrated in the United States to commemorate Mexican culture and heritage. Parties, music, and festive events are hallmarks alongside tacos, tequila, and other Mexican fare. 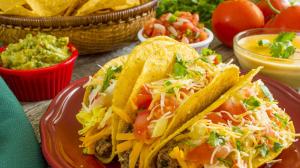 May 10- Self-Care
May 17- What Made You Smile This Week?
May 24- Favorite Cookie Recipe