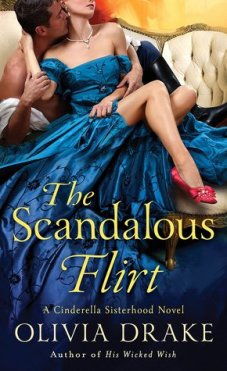 Aurora Paxton was once the belle of the ball, the most sought-after debutante of the season―until a scandalous mistake ruined her. Shunned by her family, Rory was banished to the country to live in disgrace. Now she’s been summoned back to London by her stepmother, who is being blackmailed by the least likely person Rory can imagine: Lucas Vale, Marquess of Dashell.

Lucas is someone Rory’s known for years―a man as devastatingly handsome as he is coldly disapproving of her. What in the world could he want from her or her family? Rory intends to find out as soon as she comes face to face with her old foe. What she never expects, however, is that the icy aristocrat has a soft spot for her―and a secret plan to redeem her status. Could it be that Lucas has been in love with Rory all along. . .and has finally found a way to win her heart?

This novel tries to imitate Sleeping Beauty, although soon the references disseminate within a few chapters. The main character is Aurora Paxton, Rory for short. She pricks her finger on the spinning wheel and lives in the country away from society. After being exiled eight years ago following a scandal that near ruined her family, Rory is now tricked into returning to London after learning her stepmother is being blackmailed and her younger sister is engaged to an old codger of a duke. Rory receives ruby red slippers from Lady Milford, the bearer of the bad news.

Upon her arrival in London, Rory discovers her stepmother hasn’t changed a lick, despite the years that have passed and the death of Rory’s father. Her stepmother is steadfast that Lucas Vale, the Marquess of Dashell, is the blackmailer, holding a packet of secret love letters between his father and Rory’s stepmother. Rory strikes a deal – if she can return the stolen items that are the source of frantic scandal – Rory will receive a third of her dowry, money she desperately needs to sustain her and her aunt in their cottage in the country.

Rory immediately sets out to become the companion to the Marchioness, reputed to be incorrigible and going through companions like fresh knickers due to her horrendous nature and behavior.  It will be easy to recover the scandalous letters if she’s under the same roof where they are hidden. During her search for the mysterious letters and to stop the impending blackmail, Rory finds herself embroiled in a bitter battle with Lucas Vale.

I found Rory fascinating. She was innocent and naive eight years ago, blindly believing the rushed and heated words. Now she is a renowned cynic despite her innocence. Her wild and sassy nature, though, hasn’t disappeared. Her relationship with her aunt is very heartwarming and redeeming. Her sister and her aunt are the two most important people in her life and she wants nothing but their happiness, even at her own expense.

Lucas was an enigma. From the beginning, he acts like the stone cold heartless jerk whenever Rory is around. He treats her like she is beneath him and throws her embarrassing past in her face. He does not present gentlemanly manners. Under his tough exterior, Lucas is drowning in family debts. His father’s debts, to be precise. He needs to marry a rich heiress to keep his family properties. He will take up his marriage with faithful fidelity for his family’s needs despite his own feelings for another. Another who is just trouble.

Rory and Lucas wind up pairing up to discover the blackmailer. They share some great moments of camaraderie and Lucas treats her like an equal in those moments. They have witty banter and interaction beyond frivolities, for Rory isn’t a frivolous woman. While there may have been inconsistencies with the time period, I enjoyed the book despite the misunderstandings that crop up.

There are two things I need to clarify:

Shortly after graduating from Michigan State University with a degree in journalism, Olivia Drake sold her first novel two weeks after sending it to a publisher. She now lives in Texas in a cozy cottage with a feisty cat, a loving husband, and two wonderful daughters who still come back whenever they want a home-cooked meal.

Many of you already know Olivia as Barbara Dawson Smith, author of 24 historical romance novels. She is a New York Times bestseller and winner of numerous honors, including the Golden Heart Award and the coveted Rita Award for excellence in the historical romance genre.

4 thoughts on “Review: The Scandalous Flirt”