Robert Grant has returned home to Lochrose Castle in the Highlands to reconcile with his long-estranged father, the Earl of Strathburn. But there is a price on Robert’s head, and his avaricious younger half-brother, Simon, doesn’t want him reclaiming his birthright. And it’s not only Simon and the redcoats that threaten to destroy Robert’s plans after a flame-haired complication of the feminine kind enters the scene…

Jessie Munroe is forced to flee Lochrose Castle after the dissolute Simon Grant tries to coerce her into becoming his mistress. After a fateful encounter with a mysterious and handsome hunter, Robert, in a remote Highland glen, she throws her lot in with the stranger—even though she suspects he is a fugitive. She soon realizes that this man is dangerous in an entirely different way to Simon…

Despite their searing attraction, Robert and Jessie struggle to trust each other as they both seek a place to call home. The stakes are high and only one thing is certain: Simon Grant is in pursuit of them both…

Jessie Munroe has had a fall from nobility. For years her uncle ruthlessly whiled away the family fortune while her father tried to save it. Despite the delays, the day came when they were homeless. Her father has accepted a position at Lochrose Castle. Jessie takes a liking to the elderly Earl of Strathburn, although his wife and half-son, Simon, are not cut from the same cloth. They are snobbish and devious. The Earl pines for his long-lost son, Robert, who took part in the Jacobite uprising. With a price on his head, a near fatal injury, and his brother hounding the Dragoons to steal him away to the gaol, Robert was secreted away to a ship and never seen again.

After a decade during which he is presumed dead, word makes it halfway ’round the world of the troubles of his father and the estate. Robert plots to return to have a clandestine meeting with his father. He is a different man now and is pained by the lives lost following him into battle. He regrets his hot-headed ways, but fears there is no redemption for a man like him. After all, he is a wanted man. The castle is filled with caring, helpful servants who understand the bounds of their duties and follow the Earl at all cost. It is how Robert escaped with his life, and it is why hiding out in the Highlands, awaiting the right moment, Jessie flees the castle to protect herself against the wretched and lecherous Simon Grant. He is an ugly, vengeful, borderline demented young man. He will not let Jessie, his Jezebel, get away. He hunts her to the ends of the earth, which is how she winds up with a foot injury traipsing to the Earl’s abandoned hunting lodge. Her plan is to get to the nearby coach station and travel to a relative’s home for safety.

The castle is filled with caring, helpful servants who understand the bounds of their duties and follow the Earl at all cost. It is how Robert escaped with his life, and it is why hiding out in the Highlands, awaiting the right moment, Jessie flees the castle to protect herself against the wretched and lecherous Simon Grant. He is an ugly, vengeful, borderline demented, young man. He will not let Jessie, his Jezebel, get away. He hunts her to the ends of the earth, which is how she winds up with a foot injury traipsing to the Earl’s abandoned hunting lodge. She plans to get to the nearby coach station and travel to a relative’s home for safety.

Her plan is quickly foiled when she awakens to a searing pain in her arm, and soon a strange man presiding over her. While transported here and there, she quickly gathers he is not quite who he says he is. To protect her virtue, she fictionalizes an engagement to Simon. Beautiful as a siren Jessie may be, but anything attached to Simon is tainted in Robert’s eyes. As Jessie helps Robert accomplish his task of reuniting, Robert promises to help her escape.

Once inside the castle, all bets are off. A series of unfortunate events occur, leading Robert and Jessie down an entirely different path while they both struggle with the unquestionable attraction to one another and their desire to protect each other.

Despite her moments of indecision and innocence, Jessie is a strong, determined young woman. She uses her quick wit and intelligence to get out of a scrape or two, and Robert’s warrior instinct vows to shield her. He has grown since that young man he was, and is a stark contrast to his villainous brother, Simon. He and his mother play large parts in moving the plot onward,  and it is utterly despicable. The gooseflesh will rise on your arms. I wanted to wrap Jessie up in bubble wrap and hide her away somewhere.

I loved the Earl. He is wise beyond his semi-senile appearance. The servants served as a supporting cast of characters and were an asset to the family name. Heart and loyalty abound within the walls of Lochrose Castle, and it was wonderful to see all of these individuals cheering Robert on from the sidelines.

I thought the ending would lead into another book, and I was disappointed that there was an epilogue, considering the events that had just transpired. In the writing world, it was the easy way out to slither out of truly unfolding that final event. I could have done without the epilogue entirely in exchange for a well-crafted chapter that brings all the pieces to a proper ending. 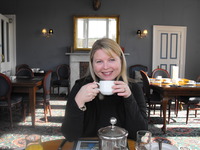 Amy Rose Bennett has always wanted to be a writer for as long as she can remember. An avid reader with a particular love for historical romance, it seemed only natural to write stories in her favorite genre. She has a passion for creating emotion-packed—and sometimes a little racy—stories set in the Georgian and Regency periods. Of course, her strong-willed heroines and rakish heroes always find their happily ever after.

3 thoughts on “Review: The Master of Strathburn”