This is a weekly meme hosted by Sam @ Taking On A World of Words. To join in answer the following three questions and hop over to Sam’s and leave your link. 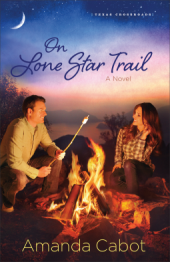 I started On Lone Star Trail last week. It is set in the Texas Hill Country and within a few hours’ drive of where I live. The setting and description in the beginning made me think of all the things we wish could be represented. When I updated my COYER group about my read, I wished I could have put some Texan icons behind my post. While I had one nasty naysayer (who prefers Jack in the Box over Whataburger? really!?), I do so wish there were Texas icons available. FYI – if you use the little white and red flag in your keyboard, it is *not* the Texas flag. That’s the Chilean flag. The swatch of blue on the left runs from top to bottom on the Texas flag. 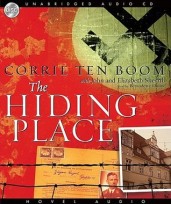 I started an audiobook for the first time in months. I just picked the next thing in my Overdrive app on my Kindle, and it wound up being The Hiding Place, a true story by Corrie Ten Boom. I am so enjoying the story and the compassion Corrie and her family are showing for their neighbors and other Jews. Such a story to tell. Ironically, a few days after starting this on audio, The Man and I watched The Zookeeper’s Wife which is based on the same premise of safehousing Jews from the Nazis and Gestapo. It was also a true story and they housed Jews in the Warsaw zoo.

At one time Corrie ten Boom would have laughed at the idea that there would ever be a story to tell. For the first fifty years of her life nothing at all out of the ordinary had ever happened to her. She was an old-maid watchmaker living contentedly with her spinster sister and their elderly father in the tiny Dutch house over their shop. Their uneventful days, as regulated as their own watches, revolved around their abiding love for one another. However, with the Nazi invasion and occupation of Holland, a story did ensue.

Corrie ten Boom and her family became leaders in the Dutch Underground, hiding Jewish people in their home in a specially built room and aiding their escape from the Nazis. For their help, all but Corrie found death in a concentration camp. The Hiding Place is their story.

I did finish Tumble Creek after pushing on to the end. I rated it two stars. I actually finished it in the middle of the night and started a new book but didn’t want to update my post last week. There was a lot left to be desired from this book. The concept was a good premise, but it just wasn’t flushed out at all. It was like two teens wrote large chunks of the book, wreaking havoc on character interactions and believability. I expected so much more and it was a total letdown.

I’m making small strides! I hope to have all of these finished by the end of August. With the lag in time for reading and then writing the reviews, I should be close to starting Christmas reads soon after these are done!

Despite a few people thinking I have fake nails, these are my real nails...that were done in mid-February for my birthday! This is the one indulgence I wish I could have right now. Don't even get me started on my feet. 🙄 #nailcare #snsnails #fileaway
Poco says it's nap time. No more works. #pocoloco #pocowildchild #chihuahua #chihuahualove #chihuahualife #chihuahuasofinstagram
Saw this in my feed and thought I'd share!
This is how Brandon cuts cake. MY cake. I don't think we can be cousins anymore. #funfetticake #favoriteicing #rainbowchip #whatamonster #destroyed
Baby is sitting pretty for her own dinner plate. 😂 #nobodyputsbabyinthecorner #mysweetbaby #kfc #readyforfoods
My work companion. She is much more behaved post-surgery. Still has her moments but definitely improved. #revel #revelwithoutacause #coworker #collielab #labcollie #colliesofinstagram #labsofinstagram