I was out two days this week (on school business), and it was nice to be away. I was also surprised that someone defended my partner and I to an important individual on our campus who said some rather demeaning things about us doing our jobs. Surprised that someone would stand up to this person, and also surprised in who that person was. I am thankful for that because as teachers we are always made to feel like we are failures, that we are not doing enough. I am literally killing myself trying to be good at my job, and that’s still not good enough. And I am a good teacher.

Last weekend we went to the local shelter at the man’s. We looked at one dog in particular, and she was insane when they took her out. She looked like a flying fish, jumping up and spinning at the same time, hitting me in the hips. In her file it was noted she had been adopted and was aggressive, so we rested on that. They got a slew of new dogs, so we went and looked again. The man had picked out one he sent me on Friday morning, and by the time we got there Saturday afternoon she was already gone. There were two other little dogs we like a lot. We didn’t want a puppy, but they were both six months. One already had an application in, so we asked to see the other. This shelter requires meeting all people and all pets in meet and greets before adopting out animals. We live only five minutes away, so we went home and came back with Baby. Things went well and we went home with a sister! Operation Sister was a success.

Baby’s new sister’s name is Cera. It was the name she came with, and after digging into her folder, the man has decided to keep the weird spelling. 🙂 We are thinking she is a Rottweiler – Dachshund mix, but aren’t positive. We did DNA tests for both of them and sent them off Saturday. 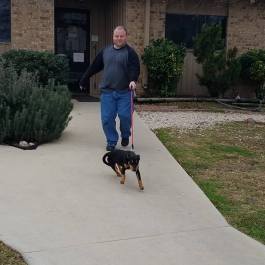 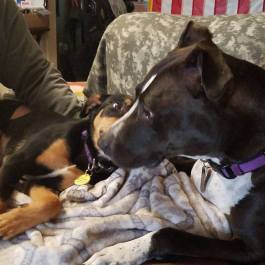 I need to finish up Cruel Beauty and also Somebody Like You. I had wanted to start a new book yesterday, but that didn’t happen.

This is a feature I am adding to my Sunday Posts. After being asked by a coworker – in all seriousness – if I had a life, I decided to join disc jockey Bobby Bones of Kase 101 in doing one human thing each week.

I went and spent several hours with my good friend – who I refer to as Pineapple in my do betters. I had a gift for her and I haven’t seen her in a while. We talked and just had a great time. Looked at rescue dogs. It was good for me, and for her.