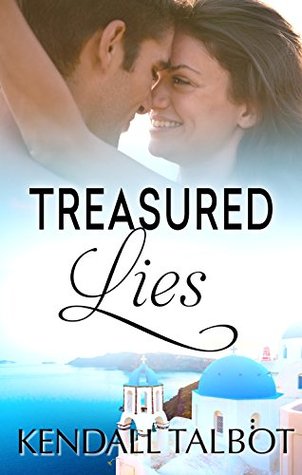 The story and the adventure continues in Kendall Tablot’s second installment of the series. It isn’t necessary to read the first book in the series in order to read Treasured Lies, but I found it very helpful. It lays out the foundation and backstory of Archer and his mother, as well as the character Nox.

The book alternated chapters between what was happening on board the Evangeline with Archer and Rosalina as they search for Calimala treasure with what was happening to Nox, who did indeed survive his injuries and is out for revenge.

Archer and Rosalina are now engaged, and they have their full crew set up in the Greek Islands back at the very spot where the catastrophic attack had happened. With all that had happened, it drew a lot of media attention and they are trying to fly under the radar quickly.

I liked the description of the characters sprinkled throughout the book. They each seemed to have their own spotlight moments, which I didn’t expect since the focal point is Archer and Rosalina and Alessandro. This brings a fullness to the secondary characters and makes them more well-rounded and a true part of the treasure hunt.

Helen rarely ventured from her bedroom. She barely did anything, for that matter; she was a tormented soul, trapped in a horrific past that now consumed her present.

From the moment Archer taught Jimmy how to dive, all that changed. Sure, he continued to enjoy the rum and the card playing, but once he’d experienced the pure tranquility of the ocean, Jimmy was a convert.

Jimmy was as steadfast as an old sea dog. His morals were built on dependability, backbone and loyalty.

The only character that didn’t seem to have a share of attention was Ginger, the “cook” Jimmy hired in book one. As an interesting turn of events happens, Rosalina questions Ginger’s place onboard, and later so does Archer.

Some of the interactions between Archer and Rosalina I found odd, at least in the dialogue that they shared with one another. It wasn’t what I remembered from the first book, and seemed unnatural at times. The closeness and connection that they forged seemed to have lost its glimmer, even though they are newly engaged.

The more he looked at them, the more he realized these two men were not normal. Everything from their disheveled appearance, their foul stench and their lack of communication, led him to believe they hand’t lived a normal life.

Meanwhile as chapters alternate, Nox seems to come back to life, although he is living through a version of his own personal hell. Frankly, he deserves every bit of it. The irony about him being stranded on an island and held captive did not elude me. The irony builds as he describes and condemns his island mates. It wasn’t unexpected, but the nerve of the man! When he, indeed, is probably more noxious than they. His name matches his personality to a T.

With a crazy man with a helicopter and a bucket load of money who was determined to get his hands on their treasure, reality had slipped into a horror movie.

Archer’s deceased father plays a significant role in his life. He is the reason for everything Archer does, and also what haunts and torments him as well as Helen. As they work to uncover what is at the seafloor of the site where his father died, they are interrupted by his father’s nemesis: Ignatius Montpellier. Iggy is a man of seemingly limitless funds, an incredible reach and extension of power in various legal and political circles, and without any scruples whatsoever.

The plot is very fast-paced and doesn’t take a moment of pause, unless you count Nox’s chapters. As I didn’t like Nox at all, I quickly skimmed most of his chapters to get back to the Evangeline. I thoroughly enjoyed the treasure hunt and the discoveries they made. The discoveries and the history that Alessandro details or pieces together was exciting and heightened by the mystery surrounding some of the find. Not to mention the crazy, helicopter-loving Iggy chasing them down.

Two things that surprised me were the growth of Helen and Nox. Never would I believe Nox to come anywhere close to compassion, but he finds himself in an unusual situation where he could find himself staying. There was a lot more of his character shown in those short chapters than in the whole of the two books. Helen also grew as a character, coming out of her deep and traumatic shell. Although slowly at first, she ends up providing valuable information about Archer’s father and some of his treasure hunting history.

I found the ending fell flat for me. I was expecting the two storylines – divided by point of view in the chapters – to converge, and they never did. I was expecting more. Things were left on the back burner, as if they will surface fully in the next book. The final chapter of the book made it clear there would be another book.

I do recommend this book because of the adventure and the backstory that comes out about Archer’s father. There is so much more than what is just on the surface, and the crew is vigorously piecing together the inconsistencies of the past. Time is of the essence, especially with that bozo Iggy hot on their heels.

Brisbane author Kendall Talbot’s used to daydream about robbing the bank she worked in. Thanks to her husband’s gift of writing lessons in 2008 she decided to write about it instead.

An adrenaline junkie and mum of two Kendall says, “I love the idea of screaming and the feeling you get when you are about to jump.” Now-a-days she gets the same rush writing action adventure scenes.

Next on Kendall’s hit list is the Crime novel she’s long dreamed of. Yes she’s robbing that bank! Set in Brisbane in 1992 “Double Take” is scheduled for release September 2015.