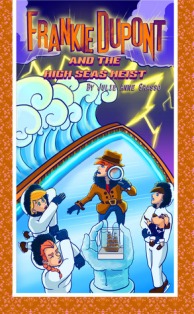 Frankie Dupont seems to catch odd-ball cases in the most unlikely places. You would think he would be used to it by now.  When his next case lands him on a luxury cruise liner full of devious chocolatiers with ulterior motives, Frankie will be expected to solve the crime, even before it’s committed.  Although his mind is certainly up for the challenge, Frankie realises his stomach is yet to find its sea legs.

The Duponts are celebrating Fankie and his father’s birthdays at Enderby Manor when they open a mysterious package sent by Madame Marie Fontaine with four VIP cruise passenger tickets and four airline tickets for the entire family to come to her aid. The original plan changes change, and Mr. Dupont sets off to Antarctica with Frankie, Kat, Amy and Sherlock. When they arrive, no one is more surprised than Frankie to see Inspector Cluesome sitting on Madame Marie’s couch, let alone the tale they are about to tell of a suspected robbery about to occur. It turns out Madame Marie’s granddaughter also has her own reasons for calling Frankie and his dog to the ship.

Madame Marie Fontaine – a wealthy woman who owns a cruise ship; reaches out to the Duponts for help

Madeline – Madame Marie’s granddaughter; she has a secret reason for wanting Frankie on the case

Vincent – a new employee on the cruise ship

Inspector Cluesome – an inspector from the Dupont’s hometown; involved in several of Frankie’s previous cases

Emmaline Legrand – a notorious thief and chocolatier; suspected of making a soon-to-be hit on the Fontaine family fortune

“On the contrary, madam.” Cluesome stroked his mustache. ” I personally will vouch for the lad and lasses, and for what you plan for us to undertake, it’ll be a good idea to have some little eyes and ears on the ground.”

The plot of this installment was a quite elaborate, much like the first two books in the series. I was instantly drawn in. Who wouldn’t be with a high-stakes heist about to go down? And in such an isolated locale to boot. But it was when Madeline started sharing her case for Frankie and team to investigate that I knew something either amazing or disastrous was going to happen. I liked that Frankie, Kat and Amy were so willing to help Madeline solve her case and all the efforts they put into it. The fact that they were foiled over and over again just made it that much more angsty.

If you’re not up for buying, definitely borrow. This is not one you want to skip!

With a background in paediatric nursing, Julie Anne Grasso spent many years literally wrapping children in cotton wool. Every day she witnessed courage and resilience from the tiny people she cared for, which inspired her to write stories to entertain them. A science fiction nerd (she even owns a TARDIS), cupcake enthusiast and lover of all things mystery, she lives in Melbourne with her husband Danny and their little girl Giselle. Most days she can be found sipping chai tea and dreaming up wonderful worlds that often involve consumption of cupcakes.