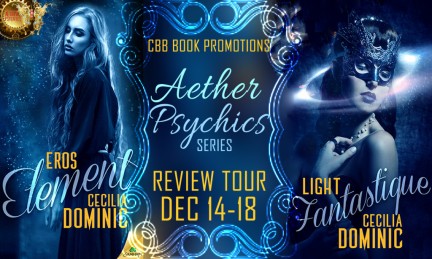 Welcome to my tour stop for the Aether Psychics Series by Cecilia Dominic! The tour runs December 14-18 with reviews of both Eros Element and Light Fantastique.  This is a New Adult Steampunk with a sweet romance (not graphic). The book is available in ebook formats worldwide.

Today I will be reviewing the first book in the series, Eros Element. Look for Light Fantastique tomorrow!

If love is the ivy, secrets are the poison.

After enduring heartbreak at the hands of a dishonest woman, Edward Bailey lives according to scientific principles of structure and predictability. Just the thought of stepping outside his strict routine raises his anxiety.

Adding to his discomfort is Iris McTavish, who appears at his school’s faculty meeting in place of her world-famous archeologist father. Worse, the two of them are to pose as Grand Tourists while they search for an element that will help harness the power of aether.

Iris jumps at the opportunity to prove her worth as a scholar—and avoid an unwanted marriage proposal—while hiding the truth of her father’s whereabouts. If her secret gets out, the house of McTavish will fall into ruin.

Quite unexpectedly, Edward and Iris discover a growing attraction as their journey takes them to Paris and Rome, where betrayal, blackmail and outright theft threaten to destroy what could be a revolutionary discovery—and break their hearts.

Professor Edward Bailey has dedicated his life to science, and after a heartbreaking ordeal he decides to live by the structure and predictability of science. Everything about his life is strictly routine, right down to the half cubes of sugar he puts in tea. He works alone in the aether department at the university.

Johann Bledsoe is Edward’s closest friend and works at the university with Edward. He is a talented musician and also a notorious skirt-chaser, but is extremely protective of Edward.

Iris McTavish takes up in her esteemed archaeologist father’s stead when called to the university. A rich American has requested Professor Bailey and archaeologist McTavish tour Europe as Grand Tourists in search of an element that will harness the power of the aether, which will in turn save Edward’s job and department from being cut.

Iris has studied all of her father’s work and wants to follow in his footsteps. They share a special connection with objects that allows them further insight than strictly the historical. Iris snatches this opportunity to save Grange House, make her mark as a scholar and avoid an unwanted marriage proposal. All the while hiding the truth about where her father is and what he is doing.

Despite their magnanimous personality differences, Edward is drawn to Iris’s love of learning, the scholar in her as they set out for Paris and Rome. Bledsoe wants nothing but to keep them apart and protect Edward, even at the extent of lording a hurtful piece of blackmail over Iris.

As they make their maiden voyage via airship to Paris, the expedition is met with unexpected betrayal, blackmail and theft.

Edward Bailey – a neuoritic professor who is obsessed with the world of aether and will do anything to protect his department, which allows him to work alone; he has an interesting friendship with Bledsoe and has an instant animosity to Iris

Edward is like a child in a lot of ways. He seems insensitive but is easily hurt.

Johann Bledsoe – a womanizing, gambling musician who is very loyal to Edward but is also very secretive; uses his wily ways to blackmail Iris

Iris McTavish – an orphaned young woman who wants to pursue work or study at university as a scholar; she possesses an uncanny power of reading objects; she sets out on the expedition under the guise of working with her father from afar to be able to keep her home

Marie St. Jean – a maid supplied to Iris for her journey by Cobb; she seems to have many secrets of her own and knows much more about the expedition from Cobb himself

Parnabay Cobb – a wealthy American contracting and funding the expedition; at odds with the spying Clockwork Guild

Patrick O’Connell – an Irishman who works with Doctor Radcliffe; he becomes very protective of Iris and Marie

“Sometimes the universe drops things into your lap that you don’t recognize as gifts at first.”

From her childhood, her father had told Iris how objects all told stories, and the ancient ones had the best stories of all.

I liked the character interaction the most. Each character had their own purposes and motives for accepting their roles in the expedition (or tagging along with it), and they are each focused on different components. Despite the individual’s gains, they all begin to work together to achieve the expedition’s goal.

A book full of life and death, blackmail and betrayal, suspicion and secrets? I recommend buying this one.

Cecilia Dominic wrote her first story when she was two years old and has always had a much more interesting life inside her head than outside of it. She became a clinical psychologist because she’s fascinated by people and their stories, but she couldn’t stop writing fiction. The first draft of her dissertation, while not fiction, was still criticized by her major professor for being written in too entertaining a style. She made it through graduate school and got her PhD, started her own practice, and by day, she helps people cure their insomnia without using medication. By night, she blogs about wine and writes fiction she hopes will keep her readers turning the pages all night. Yes, she recognizes the conflict of interest between her two careers, so she writes and blogs under a pen name.  She lives in Atlanta, Georgia with one husband and two cats, which, she’s been told, is a good number of each. She also enjoys putting her psychological expertise to good use helping other authors through her Characters on the Couch blog post series.