Remember last week when I said I would be getting up a post all about going to Jeff Anderson’s workshop? Well, I had every intention of doing so, but I didn’t even have time to call and make a doctor’s appointment. It really sucks being a teacher because all of your available time to make phone calls like that, or to say your bank or credit card company, are in full use by your job duties. Look for one this week instead! … And I will also be putting up my Christmas tree this week, too.

So on one of those days that I was up all night, I cashed in on Ebates and bought over $500 in bedding from JCPenney’s for only $189. Earlier last week I was so excited because there was a large package on my porch. I thought it had arrived!

It was only my king size pair of pillows.

And apparently Beauty & the Beast is extremely popular on Amazon right now because even with my Prime Membership, it is estimating two weeks to ship. What is up?

I did, however, receive my boxed set of Harry Potter! I ordered in paperback, and I’m OK with that. I’m still waiting on the Illustrated Edition of HP and the Sorcerer’s Stone for my mother. I made a BIG SISTER-I’M THE OLDEST executive decision and told my younger brothers we were getting it for her Christmas gift. And that they owed me money. 🙂 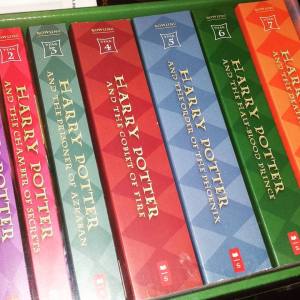 On the homefront, the mice are now trapped in my house. My landlord came and fixed some things that should have been taken care of long before I ever moved in (last November), and now Baby is attacking the stove at every opportunity. They even broke the first shot glass souvenir I ever bought from my senior band trip to Florida.

It is on! This will be The Long Winter of the Hunger Games. And it ain’t going to be Baby and me who die.