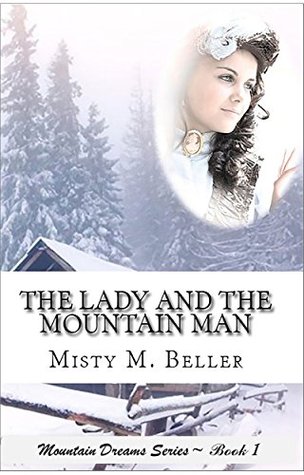 Leah Townsend, a recently orphaned heiress, flees Richmond after discovering her fiancé’s plot to kill her after their wedding. She needs a safe place to hide, and finds herself accepting a newspaper marriage proposal from a God-fearing young rancher in the Montana Territory. But when Leah arrives at the mountain ranch, she learns her intended husband was killed by a grizzly, leaving behind a bitter older brother and a spunky younger sister.

When Gideon Bryant finds a city girl standing in his log cabin, his first thought is to send her back where she came from. He’s lost too many people to the wild elements of these mountains––his parents, his wife, and now his brother. His love for this untamed land lives on, but he’s determined not to open his heart to another person.

But when an accident forces Leah to stay at the ranch for seven more months, can Gideon protect his heart from a love he doesn’t want? Has Leah really escaped the men who seek her life?

Leah is a very wealthy Richmond woman recently left orphaned after her oil baron father passes. Although he tried to set up Leah with a prominent husband, he did nothing more than place a contract on her life. Leah overhears her fiancé’s plans to off her after their wedding.

Leah finds herself on the run, and decides to not only answer but accept a marriage proposal from an “intelligent, young God-fearing” rancher with red hair and green eyes. After several months’ journey to Helena, Leah is rocked when she discovers her intended, Abel, was killed. Left behind on the Bryant ranch are Abel’s bitter brother Gideon and his sister Miriam.

To Gideon, Leah is nothing but a lecherous city girl looking to bank in on the Bryant money. He wants nothing but to send her back to Virginia, or anywhere else. He doesn’t want the responsibility of one more person to take care of after all the loss he’s suffered in the mountains.

Unfortunately, God has different plans for Gideon, and he has sent Leah to the place where she needs to be. Can the two of them follow God’s will, or take matters into their own hands?

Leah – a rich, orphaned heiress with a big heart

Emily – Leah’s nanny and long-time companion; she is the only family Leah has

Simon – Leah’s menacing fiancé; his reach extends beyond the long arm of the law

Miriam – Abel and Gideon’s younger sister; she is a spunky but lonely young lady

Gideon – Abel’s older brother; he is a very bitter man

Ol’ Mose – a wagoner who transports Leah to the Bryant ranch; he is a good friend of the Bryants

“Aaah!” It was all she could say. Her leg hurt so badly, she couldn’t think or speak. At least her breath was coming a little easier now.

“Easy now. Don’t move just yet.” A voice crooned above her, while big hands gently rolled Leah onto her back. Was that God? The voice didn’t boom like she’d always imagined God’s would, but was a mixture of strength and honey, both manly and gentle.

Everything about Leah seemed to flow. She took everything in stride. She was a charming character who wanted to learn the life of a rancher. I loved that she made everything she touched better, valued and loved. There were several occasions she could have had negative reactions, but she didn’t ever seem to let anything change her mannerisms.

The Recommendation – Buy, Borrow or Skip?

I do recommend this book. It has a great cast of characters with some interesting stories themselves. It is a great read for winter, but I’m not sure if I’d say buy it. My suggestion is to borrow.

Misty Beller was raised on a farm in South Carolina, so her Southern roots run deep. Growing up, her family was close, and they continue to keep that priority today. Her husband and two daughters now add another dimension to her life, keeping her both grounded and crazy.

God has placed a desire in Misty’s heart to combine her love for Christian fiction and the simpler ranch life, writing historical novels that display God’s abundant love through the twists and turns in the lives of her characters.

Writing is a dream come true for Misty. Her family—both immediate and extended—is the foundation that holds her secure in that dream.

6 thoughts on “Review: The Lady and the Mountain Man”