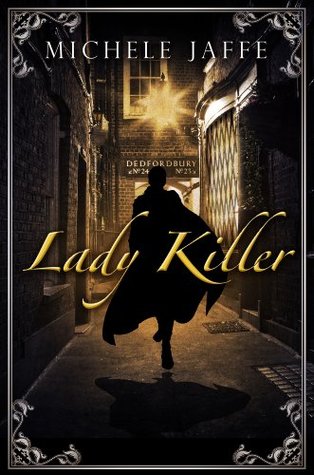 It’s a race against the clock—and natural law—when a murderer seems to return from the dead, hellbent on killing again.

Clio Thornton’s interest in solving the mysteries plaguing 16th-century London has put her at odds with her wealthy family. Stumbling upon a grisly murder, she’s determined to investigate it, even when all of her discoveries point to an impossible killer: the Vampire of London, vanquished by Viscount Miles Loredan, the soon-to-be husband of her cousin.

Miles Loredan killed the Vampire of London three years ago. When Clio comes to him with her theories, Miles finds them impossible to believe. But intrigued by her passion and her beauty, Miles agrees to hire her and support her investigation. What starts as a professional relationship soon becomes personal—and dangerous. Because Miles is betrothed to another woman. And Clio is the Vampire’s next target.

Clio Thornton has not had the easiest of lives with a grandmother like Lady Alecia Nonesuch. She lives in Which House with a rag-tag group of friends, including three playwrights and a manservant named Snug. One night she finds herself at the center of vampire’s crime scene. After three years, it seems he has returned from his wait in hiding while everyone thought he perished. Clio is insistent upon finding the fiend who has murdered so many women, and it leads her right to Miles Loredan.

Clio – a young woman constantly at odds with her family; she is conflicted about the murders but intent on uncovering the killer

Toast – Clio’s monkey; he can follow a scent anywhere and has his own language with Clio; fond of pilfering items and hiding them in his doublet

Edwin – Mariana’s father; not in his right mind

After reading the first two installments, I found a pattern that I was pretty sure would be coming, but I wanted to read it nonetheless.

I loved the way Clio and Miles meet.

There was a dancing monkey. But the elf was a woman. A woman with a smear of dirt on one cheek and a tattered gown and long brown hair and enormous, challenging brown eyes. An absolutely stupendous looking woman.

There was only one thing to do with a woman like that. Reaching out, Miles pulled her toward him and pressed his lips hard against hers.

She tasted like a memory, like summer, and youth, and his favorite kind of ink all rolled together, and he could have gone on kissing her all day if she had not pulled away, leveled a knife-sharp look at him, and said, “You moldy mongrel.”

Clio is a woman who is an odd mix of eccentricities. She is a voracious reader and an advocate for others less fortunate or less empowered. I liked that about her character.

Clio has her own theories about the vampire fiend, and she takes them to none other than the man who murdered him three years prior: Miles. With his help, she hopes to follow the trails of the killer and bring justice to the women of London so they do not have to live in fear. Clio and her gang are a constant source of amusement and confounds Miles at every turn.

Grandmother has her own agenda and plans for her two granddaughters. The family dynamics in were so interesting. I couldn’t understand, though, why Lady Alecia didn’t simply cut Clio entirely off and send her out into the world on her own.

Clio’s vulnerable side also leads to a lot of her internal conflict. Her crazy family greatly contributes to it.

She wished that Toast had not been sent to sleep in Corin’s chambers, wished that somehow she was not entirely alone with Miles. Wished that her best friend was not a monkey. She felt her lower lip begin to tremble and commanded it to cease.

Corin was also a surprising character. For a while I couldn’t get a grasp on his character, but he and the rest of the staff and Miles’ guards turned out to err on the side of a sweetheart instead of the brutish man who serves as their boss. The relationship the two of them have is increasingly cute, especially each time Clio says, “I read in a book once that…”

“My apologies if my questions inconvenience you, lady Thornton -“

“That is quite all right. I promise I will answer all of them later.”

“-But I refuse to be a party to this illegal entry unless you give me more explanations.”

Clio signed. “It is quite simple,” she explained, but paused as Miles made a strangled noise. “Really, it is. You need not sound like a-a baby bear cub dying.”

“I told you not to mention baby animals to me.”

The Arboretti family continues to grow with each installment, and despite becoming very familiar with Jaffe’s basic character emotion archs and relationships, I am still looking forward to the next book in the series.