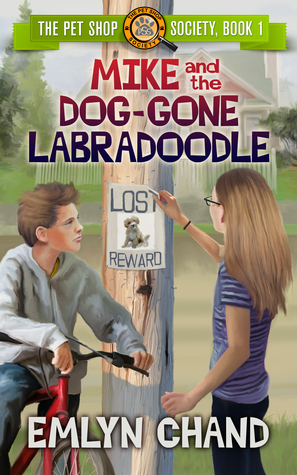 Put your thinking caps on and prepare to find the answers in the premier installment of The Pet Shop Society, a brand new mystery series for readers aged 7-11

Mike – one of the coolest kids in 6th grade; Maddie’s twin brother

Nic – the new girl in town

This is a very quick read for younger MG readers. The plot is fairly simple and predictable, designed with budding readers in mind. The classic element of friendship is present, and there is a touch of a crush going on among two characters.

Mike and Maddie’s mother owns the pet shop in town. It is Nic Chang’s first stop when looking for her lost dog, Baxter. Mike, Maddie and their two best friends resolve to help Nic unravel the mystery of her lost dog, and they start at the scene of the crime.

Mike and Maddie, being twins and all, don’t get along all that much. They are very different from one another and Mike sees Maddie as just plain weird. She doesn’t like sports or anything he likes. She won’t be friends with the girls he likes. But the one thing I appreciated in Mike’s character was that the worst he called his sister was weird, and to him she’s just Maddie.

The plot moved along quickly, and readers discover why Nic Chang’s dog went missing and what she has been up to herself. The team reassembles at the pet shop and decide they have knack for this detective business. And The Pet Shop Society is born.

From an early age, Emlyn Chand has counted books among her best friends. She loves to hear and tell stories and emerged from the womb with a fountain pen grasped firmly in her left hand (true story). Her affinity for the written word extends to absolutely every area of her life: she has published fiction across multiple genres, oversees and contributes as both an editor and an author to theNovel Publicity Guides for Writing & Marketing Fiction series, and loves the written word so much, she even married author Falcon Storm! Don’t forget that she is the founder and president of Novel Publicity too.

The book that changed Emlyn’s life is Harold and the Purple Crayon by Crocket Johnson. It opened her eyes to the world that could exist if only she was willing to create it—a lesson she has never forgotten. Maybe that’s why she loves writing her Bird Brain Book series for children so much!

Emlyn’s first novel, Farsighted, won the prestigious Writer’s Digest Self-Published Novel of the Year award in 2012 for the YA category. She now writes most of her fiction under her real name, Melissa Storm.

5 thoughts on “Review: Mike and the Dog-Gone Labradoodle”