Welcome to my stop for Ella, the Slayer by A.W. Exley. Ella, the Slayer is an Edwardian retelling of Cinderella with an undead problem. It is an upper young adult novel. The tour runs August 10-21 with reviews only, so check out the tour schedule and all the reviews about Ella.

The flu pandemic of 1918 took millions of souls within a few short weeks.
Except it wasn’t flu and death gave them back.

Seventeen-year-old Ella copes the best she can; caring for her war-injured father, scrubbing the floors, and slaying the undead that attack the locals. ‘Vermin’ they’re called, like rats they spread pestilence with their bite. Ella’s world collides with another when she nearly decapitates a handsome stranger, who is very much alive.

Seth deMage, the new Duke of Leithfield, has returned to his ancestral home with a mission from the War Office — to control the plague of vermin in rural Somerset. He needs help; he just didn’t expect to find it in a katana-wielding scullery maid.

Working alongside Seth blurs the line between their positions, and Ella glimpses a future she never dreamed was possible. But in overstepping society’s boundaries, Ella could lose everything – home, head and her heart…

Ella is still a teenager, but charged with running her father’s estate and slaying the undead with her katana. She ensures no more living become infected while trying to maintain the identities of the slain. All while enduring the pointed barbs of her stepmother and stepsister about her intelligence and station in life. Ella copes with it all by leaning on her fellow friends, who are also servants in the household, and detailing the day’s events each night with her father. Seth, the new Duke of Leithfield, has returned home to Somerset and from the war. He is charged from the War Office to investigate and control the vermin in the area. He doesn’t even know where to start, until he discovers what Ella can do and has been doing to protect the people of Somerset.

Ella – daughter of Sir Jeffrey and the housekeeper; scullery maid

I again suffered from cover love. THAT DRESS! I will not deny that I want the dress. There was just something about that staircase and the way she was standing on it. I suppose it reminded me nostalgically of Titanic, which sparked an interest in me. After reading the synopsis I was pretty sure we were talking zombies, which I do not like at all, but I was willing to give it a try.

The book is set in England directly following the World War I. Exley does a fabulous job setting the scene in terms of historical relevance for several of the characters.

Back then death only had one meaning: your life snuffed out, never to rekindle. Then came the Great War, and we learned of a new type of death. The ‘walking dead,’ we call them. Men who returned with shattered minds, unable to grasp the horrors they saw of the deprivations they had suffered.

This is the case with Henry and Sir Jeffrey. It is a state which Ella describes vividly in the first chapter. This also sets the scene later for Ella’s explanation of the vermin, which we would reference as zombies. Alice and Ella both work hard to bring Henry back into the land of the living. Ella also does the same with her father, who sits and stares out a window each day.

The first thing I really noticed about the writing style was Ella’s voice. Although this is a piece set in 1919 Britain, Ella’s internal language does not reflect that. She speaks as a modern contemporary would, and she’s funny.

He stepped forward and took my hand, placing it in his larger one for a firm handshake.

“Yes, your grace,” I muttered, staring at where our flesh touched. So warm, it spread up my arm like an escaped fire.

When I looked up, he was still smiling as his gaze searched my face. “And you are?”

At first I didn’t realize this was a Cinderella retelling even though all the signs were there. They just aren’t over-the-top. Ella’s stepmother, Elizabeth, is a woman from hell. I wouldn’t be able to control myself if I had been Ella, but she keeps her cool and calm.

When the undead returned from their graves, Ella was the first to take action. Given the highly religious focus in the community, Ella has set herself aside from the others. Her soul is damned, and that is how she becomes the slayer. It is not a job she enjoys, but it must be done.

Seth was an interesting character in that he is titled, returning home from the war with great responsibilities in this whole vermin business, but has no desire to find a wife. He struggles with his own demons and finds a kindred spirit in Ella. He is the only person who can see the pain it causes Ella to be the slayer, and those battle experiences give them a common ground.

This idea and reality that is shared between Seth and Ella speaks about the humanity of the time. Ella was very conscientious about trying to treat the undead as people. She wasn’t ruthless, as some described her. She was doing the best she could in the situation, and her thought to maintain records of the vermin ends up being extremely useful for Seth’s work.

Alice and Frank have a relationship that helps Ella and Seth as individuals and to bring them together. They are quite the cunning pair. Henry relies heavily on the support of Ella and Alice after returning from the war. The girls do their best to bring Henry back into the land of the living. Elizabeth, the stepmother, has no other purpose than to elevate herself at her daughters’ expense. It was not a surprise some of the things she stooped to doing, except the very last one. That one completely threw me.

The undead were not as bad as I thought it would be, for someone who does not like zombies. It was pretty mild up until the end. It wasn’t over-exaggerated or underplayed. The plague and vermin are a significant focus in the book and the thing that ties the entire plot together.

One of my favorite scenes was how Ella and Seth met. I also loved the scene when Seth is setting up his work and Ella sees the big picture and they start realizing the impacts of the plague and the vermin. It was a turning point in trying to move forward with solving this issue.

I did cry at one point in the book, where it seems all is lost for Ella. It was truly a heart-wrenching scene and each moment I thought Seth would show up and whisk her away, but that was not to be. I just could not fathom the depth of crazy that Ella suffered.

This isn’t your typical fairytale retelling. There is no glass slipper or fairy godmother. I don’t think this is being made into a series, although it could be done fairly easily – and I wish it would be! Ella is such a strong, intuitive and yet vulnerable character. I would recommend anyone to read her story. 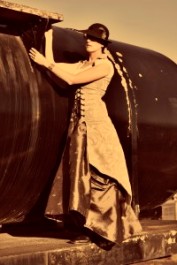 Books and writing have always been an enormous part of A.W. Exley’s life.

She survived school by hiding out in the library, with several thousand fictional characters for company. At university, she overcame the boredom of studying accountancy by squeezing in Egyptology papers and learning to read hieroglyphics.

Today, Anita writes steampunk novels with a sexy edge and an Egyptian twist. She lives in rural New Zealand surrounded by an assortment of weird and wonderful equines, felines, canine and homicidal chickens.

THIS EVENT WAS ORGANIZED BY CBB BOOK PROMOTIONS.