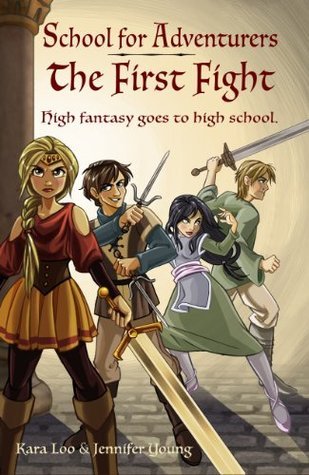 At Eastridge Academy, the realm’s best and brightest learn fighting, magic, and even thieving–in short, all of the skills needed to become a great hero.

Princess Averi, the fourth daughter of the Emperor, can’t stand to stay on the sidelines; as a new first-year, she’s determined to become the best in the class, even if that means braving dangerous combat classes and scandalizing the nobility.

Fierce, stubborn, and usually hostile when approached, Wisteria Ling is the best Combat Caster in her year. But while magic comes easy to her, socializing never has.

Rai Ravin is desperate to escape his family, even if it means breaking all the rules. But one of these days he’s going to get himself into trouble that he can’t charm his way out of…

And orphan Fell Farmington never thought he’d have the chance to leave his work on the farm to become a Warrior and soldier of legend, but getting accepted to Eastridge is about to change his life.

Together, these four will learn how to work together, how to fight, and how to survive… Especially when the closeness of war threatens their kingdom.

This is the first book in the School for Adventurers series. It contains all the elements that would engage a reader: an interesting world, witty humor, real characters, and unexpected twists.

This book has broad appeal for readers from the YA age to adulthood. The school is structured and run in much the same was as Hogwarts from Harry Potter, and some of the professors seem to share qualities with those from the wizarding school. The similarities in these aspects I appreciated, but the one complaint I have is that the school is so large with multiple buildings, warrior arenas and wooded areas that a map of the school grounds would have been perfect.

Along with the conflicts between the characters, this book contains magic, learning to fight, sneak and steal, class struggles, and political agendas. There are students from every range of socioeconomic background from the peasant level (bonded) to nobility, including a princess, as well as a foreigner.

The writing style has wonderful flow and depth. It brings to life this school and the characters. There was diversity within the main set of characters in the book, and even though there were multiple characters with their own story arcs, these were woven together in the story in such a way that everything tied together perfectly. I am sure this is not an easy task for a writer with so many characters to portray and pursue.

In addition, the plot itself is fast paced and surprising, in more ways that one. It is a tale I consumed well into the night until I’d read the final page. The characters have real depth to them, but it is not belabored in the writing. The magic and thievery is another thing entirely. As the students are learning in their courses, they learn the methodology of working them and then are tasked with practicing them, in and out of the classroom. This is where much of the fun comes into play.

Out of the four crafts (warrior, cleric, mage, thief), the warrior and thief show their sides the most. Ironically, as most would assume, the warriors are a far cry from heroic and upstanding. I did not appreciate the way the warrior training was conducted, and it leaves me silently questioning how the professors could allow it. I enjoyed the training classes for thieves the most. It is an interesting course, and despite being stigmatized as the lesser of the four crafts, there is a lot of integrity and ethics built into the the thief courses.

In the end, I was sad to see this first installment in the series come to an end. The characters are endearing and inventive, and I think they are what in large part makes the book such a good read. Plus, the magic. And thievery. I mean, there’s a Killing Game…and a Winter Ball.

I am not waiting to get my hands on the second book.

Kara Loo and Jennifer Young are two girls who love writing and do it every day. They’ve been writing together for the last thirteen years–since they were both freshmen in high school. They stayed in touch through their love of writing even though they were separated by rival colleges: Kara went off to Stanford for Creative Writing and Film Studies and Jennifer went to UC Berkeley and the University of San Francisco to get a teaching degree. They have worked together professionally as writers and editors for the past few years on several narrative video games. Titles they’ve worked on include ‘Surviving High School’, ‘Claire Hart: Soul Searcher’, ‘Cause of Death’, and ‘Clue: Secrets and Spies’.

5 thoughts on “Review: The First Fight”