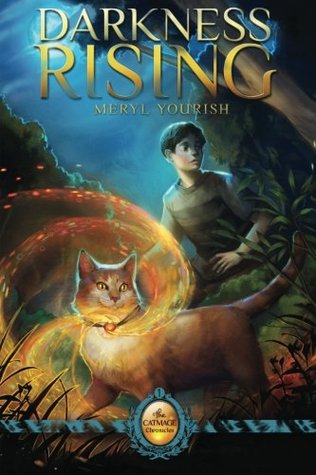 It’s been hundreds of years since the Darkness last surfaced, a grim time when both humans and Catmages lost their lives. But now the Wild Ones work with humans again, and thirteen-year-old Andy Cohen gets the surprise of his life when a talking cat shows up in his front yard. Goldeneyes, a powerful Catmage, needs Andy’s help. In the exciting first installment of this new series, Meryl Yourish takes the reader into a world of magical cats, dark powers, and a boy who finds himself entangled in their war.

Darkness Rising is the first in the YA series The Catmage Chronicles. I’m not sure I would categorize it as YA and fantasy, because it does have some darker elements to it.

There are a wide range of characters, including the Catmages, Andy and his band of friends (and enemies!), and the Catmage antagonist and his gang. Some of the Catmages have two names, like Goldeneyes, where one is more of a nickname.

Andy is the one whom the Catmages are searching for in order to help defeat the Darkness, which has risen up again after nearly three hundred years. The Son of Aaron is who can help save the Catmages. He is a young teen coming from a single-parent home. It turns out he can identify quite a bit with Goldeneyes, and they form a strong bond with one another. In many ways, Andy is the kind of kid you want to be your friend: loyal, kind and protective.

The world building of the Catmage society and their history was woven in perfectly, as Goldeneyes teaches Andy about her life. As it turns out, when Goldeneyes briefs Andy on all of this, the last time the Darkness rose coincided perfectly with the Salem witch trials. The Wild Ones, those expelled for breaking the Laws of Secrecy and other laws, are responsible yet again for the Darkness rising up.

The Catmages have a council and a Compound where they reside, and the Wild Ones and the Evil One have invaded. Life for Catmages is in turmoil. At the core of the conflict are political agendas and strife. A greed for power.

Unfortunately, the Evil One has captured one of the wisest and most powerful of the Catmages – Goldeneyes’ grandmother – and the prophecy states that Andy is the way to defeating the Darkness. Goldeneyes and her catty friends are helping Andy – and later his friends – to figure out how to rescue Nafshi from the Evil One.

There’s just a bigger problem: the Evil One knows who Andy is, and how to manipulate him to his advantage. Andy has his own set of problems at school, headed by Taylor the bully, who creates problem after problem for Andy.

The relationships in this first installment are what make this book strong and complete, from the Catmages to the humans and everywhere in between. Plus, the Evil One’s neighbor seems to be the only person the Evil One fears. Mackie is great! 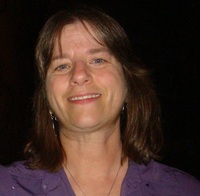 Meryl Yourish is a graduate of the Clarion Science Fiction and Fanstasy Writers Workshop (1990, Michigan State University). She has been writing since the ninth grade, when her very first short story was published in the Parents Night magazine.

Meryl spent most of her life in northeastern New Jersey. She moved to Richmond, VA in 2002, where she lives with two cats that look suspiciously like Goldeneyes and Letsan.