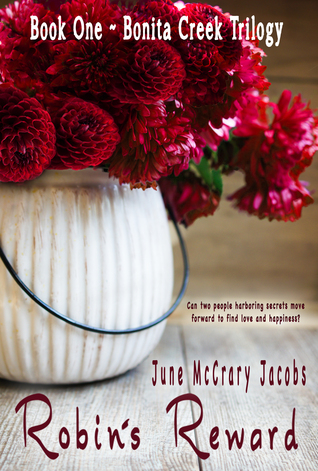 Bonita Creek’s librarian Robin Bennett is heartbroken after being abandoned by her husband, Thomas. The mysterious and handsome Jeff Clarke arrives unexpectedly and touches Robin’s life with his wit and warmth. Then, without warning, Jeff’s harsh words and abrasive actions scare her off, and Robin’s hope of finding true love withers again.

Just when it seems Robin and Jeff might have a future, Susan Stinson, whose cruel taunting has plagued Robin since they met as young teens, decides Jeff should be hers, not Robin’s. Susan’s anger and jealousy escalate dangerously. Her vindictiveness threatens the foundation of Jeff and Robin’s young relationship.

Robin’s journey through the peaks and valleys of her life meanders along the twists and turns of new challenges. Is a relationship which began with both parties harboring secrets destined to survive? Can they move past their troubles and the obstacles in their path to find love and happiness together? When their pasts rear their ugly heads, Jeff and Robin must use their faith to remain strong and true. But will it be enough for them to embrace a life of love, trials, and blessings . . . together?

I’ve discussed before how I do not like religious, preachy reads. After a ways into the book, I thought that was were it was headed and I got a little frustrated. I liked this book, and I felt it was going to be ruined with the preacher soapbox.

Not quite. Yes, there are religious tones to this book and the two main characters. In dialogue they converse about their faith. It was not enough to put me off completely. I found some of these instances a little forced in terms of the writing, in an eyeroll kind of way.

In terms of plot, I thought the book was well planned and it flowed nicely. There weren’t any strange breaks or weird transitions. I know after reading the synopsis, it’s like, what? He was mean, and now they have a future together???

Robin Bennett has lived in Bonita Creek since she was a teen, after the untimely death of her mother. Her father just could not handle life without his wife, or raising a child. Robin was left in the care of her grandparents, and inherited from them. She now resides in their cottage and has put a lot of time and love into the gardens her grandfather loved.

Everything Robin touches flourishes. All of the gardens at the cottage produce food or flowers that she shares with the community and church. The town’s library is almost functioning fully on it’s on budget solely through fundraisers, donations and grants.

Bonita Creek is a located in the picturesque coastal mountains of Northern California, and is a small town. Walk everywhere. Everybody knows everybody kind of thing. Gossip through the grapevine. The church and barber shop are focal points. Community is highly promoted in this town. This novel spans an entire year in time, from start to finish.

March. Spring break. The library is closed for two weeks, so Robin is working hard in her yard and gardens. Cue newcomer Jeff Clarke. He’s handsome and mysterious. Anytime conversation takes a turn toward anything related to him, he steers it off and away. He does not want to reveal to anyone why he is in town, and he slowly becomes immersed in the life of Bonita Creek. After discovering Robin’s identity, he cranks up the asshole moves and leaves Robin baffled and hurt.

The barber shop. Oh, how I love barber shops and little old men gossiping. Let me tell you, there are some men (ahem, Dad!) who are so nosy and gossip more than a woman! The barber shop is where Jeff goes to gather vital information he needs for his work after  things just don’t add up right and he’s left with quite a few unanswered questions. There are only two scenes in the barbershop, and in both Robin was highly promoted and discussed. I thought this was a little unrealistic, but whatever. I loved the barber shop scenes anyway.

Nobody bothers to question Jeff or ask why he’s moved to town. They just make their own small town assumptions that he’s there in good faith, and for good reasons. Until he’s presented at a city council meeting meant to destroy one vital part of the town. Unfortunately, things do not go according to the city manager’s plans. Now Jeff is free to pursue Robin and see if she’s really the woman for him.

There are just two problems.

Robin has serious trust issues after the dissolution of her first marriage.

And there’s this crazy lady who is living in a warped reality. Susan Stinson. She is seriously whacko. After one date right after he move to town, and Jeff adamantly making it clear he did not want to go out with her ever again, she thinks they’re about to get engaged. A lot of bizaare things start happening to Robin, and they get progressively worse…especially the mysterious present that is delivered by courier for her wedding shower.

Overall, I thought Robin’s Reward was a great start to this trilogy. Gee, I wonder who the next two books could be about. 😉 The setting is wonderful, and filled with enough description and focus that it’s not overbearing or underdone. There is a fairly large cast of characters and they all serve a purpose. I enjoyed the book and the characters, and even the inspirational religious portion, but at certain times (particularly toward the end) I felt that there were some things that were a little contrived, especially in the dialogue between characters. I felt there were sometimes unnecessary things said to aid the reader, when it wasn’t needed at all.

I liked Robin’s character the best, besides perhaps Pastor White. The world needs more Pastor Whites. I felt multiple connections to Robin’s character. I could identify how she felt about keeping a connection to her grandparents, and keeping the gardens up. I also fully understand the vulnerability and insecurities that Robin still carries with her after her first marriage, and how all of that went down. Been there, experienced that, except without the being married part. Reading Robin’s character as a woman, this is spot-on. Jacobs did an exceptional job developing Robin’s character and creating the internal dialogue Robin has with herself.

However, there was one major thing that really rankled me about this book. Susan Stinson. Susan’s everything is just way over the top. We’re talking requires serious medical mental health attention. First, if she was such a bully all through high school to three people in particular in the town (Robin and her two best friends), how come it didn’t arise to anyone’s attention? Especially the attention of those within the church? Second, how could she go on this long – nearly ten years after high school ended – doing things to this degree to others (in a small town!) and nothing happened before? Nobody noticed her behavior, nobody pressed charges, nobody interfered? Third, Susan’s confessions to her crimes was just too easy. If she was as crazy as her antics suggest, there’s no way she would have confessed, from a mental stand point. These particular things about Susan’s character and place in Bonita Creek really did not jive well with me. It’s obvious she is the villain and the antagonist, but there were a few areas where she was underdeveloped.

Award-winning author, June McCrary Jacobs, was the winner of Cedar Fort Publishing’s 2013 Holiday Tale Contest for her debut novella, ‘A Holiday Miracle in Apple Blossom’. ‘Robin’s Reward’ is her first full-length novel, and is set in her favorite location in California—the Mendocino coastal region. This book is the first installment of the ‘Bonita Creek Trilogy’.

June’s original sewing, quilting, and stitchery designs have been published in over one hundred books, magazines, and blogs in the past few years. When she’s not writing, reading, or sewing, June enjoys cooking, walking, and visiting art and history museums. She also enjoys touring historic homes and gardens and strolling around the many historic Gold Rush towns in the Sierra Nevada foothills. In the summertime you can find June at a variety of county fairs and the California State Fair admiring the sewing projects, quilts, and handiwork other inspired seamstresses, quilters, craftspeople, and artists have created.