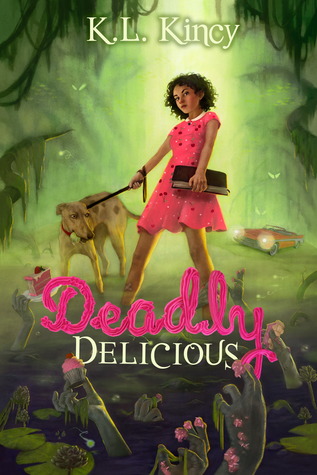 Twelve-year-old Josephine DeLune can’t take the heat this sweltering summer of 1955, and she was out of the kitchen long ago.

An awful cook, she ruins recipes left and right, and she certainly can’t compete with her family’s reputation for extraordinary food. Her daddy’s parents ran one of the best restaurants in all of Paris, but Josephine lives in Paris, Missouri. On her mama’s side, she’s up against a long tradition of sinfully delicious soul food. Rumor has it, her Creole ancestors cooked up some voodoo to make tasty even tastier. Josephine knows the secret ingredient: she comes from a long line of conjure witches with spellbinding culinary skills.

Disenchanted, Josephine works as a carhop at Carl and Earl’s Drive-In. Just plain old hamburgers, hot dogs, and curly fries, nothing magical about them. She’s got bigger fish to fry, though, when a grease fire erupts into a devilish creature who hisses her name with desire. Turns out he’s the Ravenous One, the granddaddy of all voodoo spirits, and he’s hungry for her soul. Josephine thinks he’s got the wrong girl-she’s no witch-but a gorgeous, dangerous night-skinned lady named Shaula sets her straight. Josephine is one of the most powerful witches alive, so overflowing with conjure that her out-of-control cooking simply catches fire.

Josephine would love to laugh this off, but Shaula warns her that she must learn to master her magic before the Ravenous One devours her soul. Spurred into action, Josephine breaks out her grandma’s old conjure cookbook and starts cooking. Nothing grand, just the usual recipes for undying friendship and revenge. But soon Josephine can’t escape the consequences of her conjure. When the people of Paris start turning into zombies with a strange fondness for cake, Josephine looks pretty responsible for their undead reawakening…

Josephine DeLune is one very interesting girl, from a line of interesting women. She can’t cook worth a darn despite the heritage of culinary skills on both sides of her family. Creole and Parisian cooking, to boot!

Josephine does, however, stay out of the kitchen with her mama. She would do just about anything to get out of that chore! Instead, she volunteers at her father’s restaurant, Carl and Earl’s, being a carhop in training.

Josephine avoids it at all costs because her Creole heritage is full of conjure witches, and her mother can bake up conjure better than anyone else.

One day, she sets off this terrible grease fire. Except it’s not really her fault. There’s something in the fire. And it wants her!

Through another mysterious visit from a dangerous lady named Shaula, Josephine learns this creature is the Ravenous One. He hungers for Josephine’s soul. Except, just like her cooking skills, Josephine has no conjuring skills either! He’s got the wrong witch girl!

As the novel progresses, Shaula shows and teaches Josephine some very important things she needs to know about the Ravenous One, conjure and a few other tricks.

As if that’s not enough, Josephine is embroiled in an ongoing battle with her enemy, Authelia, who used to be her friend, and is now trying to steal away Josephine’s best friend for her own boyfriend. One thing snowballs into another, and it is one miserable summer for Josephine.

“Authelia, Authelia, Authelia.” Just saying her name makes my blood boil. Believe me, she wasn’t always that kind of girl. Sure, she was blonde and breathy-voiced since the day she was born, but she didn’t at so stupid until her thirteenth birthday party. It was like aliens beamed out of her brain and added a new one addicted to kissing boys and gossiping about every nasty secret in school.

With a hot mess on her hands with Authelia chasing after Quentin, and being chased and corned by the Ravenous One herself, and Authelia’s family horning in on her mama’s livelihood, Josephine takes action. At the insistence of Shaula, Josephine cooks up her own conjure to keep what she treasures and later, for revenge. But, as Josephine even insisted to the Ravenous One, she’s no witch…at least not yet.

Right as the lady at the checkout rings up my total, the front doors open. Of all the people who could walk in, it has to be Authelia. I stuff the frozen cheesecake into a paper bag before Authelia can see her last name plastered all over the product and know what a horrible traitor I am. No, not a traitor – a spy, doing reconnaissance.

Josephine’s also stumbled upon some sneakyness Authelia and her family have brewing at McArthur Mills. Some other interesting things crop up around town, including a mess of zombies that are just dying for something delicious.

The one thing I kept noticing over and over again throughout the entire book was how Kincy described everything through Josephine’s eyes. I found so many examples that were excellent uses of imagery and humor, vivid descriptions that I felt I was in Paris, Missouri with Josephine. Here is just one such example:

The Nebula Theater looks flat and washed-out in the noon sunlight, all it’s nighttime glitter and glamour gone. I park my bike and kneel on the sidewalk, fiddling with my rusty old bike lock, which is being stubborn again. By the time I’m done, I’m absolutely parched. I eyeball the Rexall’s drugstore, then ave in to temptation.

I fell in love with Josephine’s character. She was unique and fresh. Perhaps that’s just the effects of a middle grades novel, but I enjoyed every moment I spent with Josephine, the DeLunes and their town. I hope there’s more on the way!