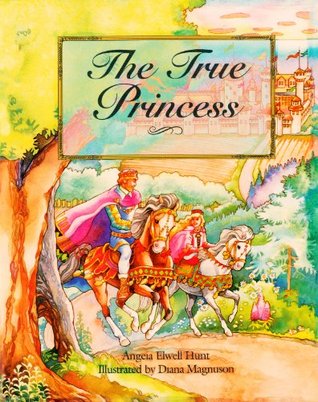 A Parable in the truest sense, this story teaches children the meaning of Jesus’ words, “Whoever wants to be great among you must be your servant”. The concept of royalty pervades the Bible, and this book offers an opportunity for parents and teachers to teach children about being royalty in God’s family. Full-color illustrations.

The young princess is sent off with her Nana, a servant, after her father is called off to take care of royal duties. There are those in the kingdom who would see the young princess taken and dethroned, so her father sends her into hiding in plain sight: as a servant with Nana.

They go to set up a bakery shop and the young princess must un-learn how to be a royal. She learns humility through her time in the bakeshop, which were all of the things the king wanted her to learn during her time away from the castle.

Christy-Award winner Angela Hunt writes for readers who expect the unexpected in novels. With over four million copies of her books sold worldwide, she is the best-selling author of more than 125 works ranging from picture books (The Tale of Three Trees) to non-fiction books, to novels.

Now that her two children have reached their twenties, Angie and her husband live in Florida with Very Big Dogs (a direct result of watchingTurner and Hooch and Sandlot too many times). This affinity for mastiffs has not been without its rewards–one of their dogs was featured on Live with Regis and Kelly as the second-largest canine in America. Their dog received this dubious honor after an all-expenses-paid trip to Manhattan for the dog and the Hunts, complete with VIP air travel and a stretch limo in which they toured New York City.

Angela admits to being fascinated by animals, medicine, psychology, unexplained phenomena, and “just about everything” except sports. Books, she says, have always shaped her life— in the fifth grade she learned how to flirt from reading Gone with the Wind.

Also in 2006, Angela completed her Master of Biblical Studies in Theology degree. She completed her doctorate in 2008 and was accepted into a Th.D. program in 2009. When she’s not home reading or writing, Angie often travels to teach writing workshops at schools and writers’ conferences. And to talk about her dogs, of course.  She is also an avid photographer, using her photos to help find homes for her local SPCA’s shelter animals.

One thought on “Review: The True Princess”