Welcome to my blog tour stop for Meet Your Baker by Ellie Alexander. This is a cozy mystery that released December 30th.

Be sure to check out the schedule for the list of reviews, interviews and guest posts by the author! The tour started January 5th and runs through the 16th. 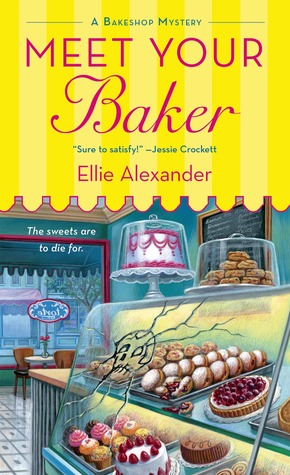 Welcome to Torte—a friendly, small-town family bake shop where the treats are so good that, sometimes, it’s criminal…After graduating from culinary school, Juliet Capshaw returns to her quaint hometown of Ashland, Oregon, to heal a broken heart and help her mom at the family bakery. The Oregon Shakespeare Festival is bringing in lots of tourists looking for some crumpets to go with their heroic couplets. But when one of Torte’s customers turns up dead, there’s much ado about murder…

The victim is Nancy Hudson, the festival’s newest board member. A modern-day Lady Macbeth, Nancy has given more than a few actors and artists enough reasons to kill her…but still. The silver lining? Jules’s high school sweetheart, Thomas, is the investigator on the case. His flirtations are as delicious as ever, and Jules can’t help but want to have her cake and eat it too. But will she have her just desserts? Murder might be bad for business, but love is the sweetest treat of all…

Juliet grew up in small-town Ashland, often within the confines of her parents’ own bakery, Torte. Despite her father’s good Shakespearean intentions, she is not overly fond of her literary namesake and instead goes by Jules.

It had been twenty-seven hours and forty-two minutes (not that I was counting) since I left the ship, my husband, and everything I’d known for the last ten years.

Her life is a bit of a disaster. She’s left her husband and her career to return home and lick her wounds, and it takes nearly half of the novel for her mother to drag it out of her about what happened. Of course, it doesn’t help that the revolving door of Torte customers keep interrupting them.

OSF is in full swing in Ashland. The director, Lance, and a handful of actors and other board members frequent Torte and drop some tasty tidbits and morsels of information. Combine that with the dull Stephanie and the enthusiastic Andy that her mother has hired for Torte and their own little mysteries – and newcomers – they bring to Torte makes for an interesting mix of characters and a seamless plotline.

Jules returns to town, and everyone is abuzz about her return, and even more so after her high-school sweetheart, Thomas, is investigating the sudden murder of OSF board member Nancy Hudson. It’s as if the two pick up with their banter right where they left off before Jules left Ashland.

“Nancy arrived to town a few months ago,” Lance said. “She made an extremely generous donation to OSF that unfortunately had more strings attached than a marionette.”

Despite Thomas being the investigator for Nancy’s murder, he ropes Jules (and even her mother) into the investigation as well. You catch more flies with a tasty scone or other treat than a badge and an iPad.

Nancy made many enemies right off the bat when she came into town throwing her money, her attitude, and her rudeness around. Unfortunately, showing up at the Midnight Club leaves quite a long list of suspects…and it seems everyone has a potential motive.

The Midnight Club came into being years ago. Many of the actors in the company also moonlight as playwrights. They needed a space to brainstorm together, and my father offered the bakeshop.

Why did every new piece of information lead to a million more questions? I was starting to wonder if I was ever going to figure out who’d killed Nancy.

The longer Jules remains home, the more she comes to realize things are not quite right at Torte – and it’s not just because of Nancy’s murder, although that does prompt several conversations between Jules and her mother, as well as employees Andy and Stephanie. The skeletons slowly begin coming out of the closet…just as the killer strikes again…and again. Jules is too invested in unmasking the killer, and several times feels her investigation efforts are putting her directly in the killer’s midst.

The drama, the theatrics, the food, and the people make this novel. There are a few intertwined histories that are revealed after Jules and few other specific characters, and Jules big blow up with her husband is finally revealed. She’s left with her marriage hanging in the balance, and comes to a realization about needing to solve Nancy’s murder.

Could it be that I’d jumped into trying to solve Nancy’s murder in order to avoid my own problems? Probably.

Ellie Alexander is a Pacific Northwest native who spends ample time testing pastry recipes in her home kitchen or at one of the many famed coffeehouses nearby. When she’s not coated in flour, you’ll find her outside exploring hiking trails and trying to burn off calories consumed in the name of research. Follow her on Facebook or Twitter to learn more. 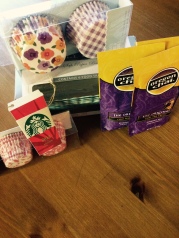 There will be two lucky winners receiving a paperback copy of Meet Your Baker, Chai Tea, designer baking liners and a Starbucks gift card. This giveaway is open to US addresses only. Ends 1/21/15.