I am excited today to bring the first guest on the blog for January’s feature focusing on historical fiction. Today, blogger Melissa Beck from The Book Binder’s Daughter is taking over!

One of my favorite genres to review on my blog is historical fiction.  I started reading historical fiction several years back when I picked up Phillipa Gregory’s novels about Henry VIII and the Tudors Dynasty.

What, exactly, constitutes an historical fiction novel?   For me it is really any book that puts the reader in the mindset of a previous period of time and era.  Some books are obviously historical fiction, like those set in 19th century Britain, or during World War II.  But what about a book that is set in the 1980’s or 1990’s?  Would that be considered historical fiction as well?  I would answer yes to this question because during those two decades there were no cell phones with texting, no computers with internet, or e-mail.  Without all of these advancements, especially in technology, we are indeed reminded of a different era in time. 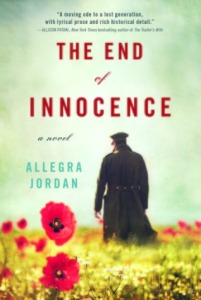 For example, this summer was the anniversary of the centenary of World War I, so I decided to read and review a series of historical fiction books set during The Great War.  I chose 6 novels, all with different settings that also highlighted various countries that were involved in the conflict.  I learned a great deal about World War I and I kept researching various aspects of the war which these books brought up.

One of the best I read was The End of Innocence by Allegra Jordan.  It focused on a group of Harvard students from different countries who were called to fight when war broke out.  Even though these young men were friends and classmates at school, when they were called to fight for their respective countries they became enemies on the battlefield.  History books tend to focus on dates and numbers and facts; but this novel gave me a deeper appreciation for the sacrifices that these soldiers, these human beings, made when going off to war.

I have to end my post with a mention of the best historical fiction novels I have ever read.  It is actually a series of two books written by Stuart Shotwell:  Edumund Persuader and Tomazina’s Folly.  They are both set in England in the early 19th century.  These books are the perfect storm of historical fiction greatness with memorable characters, engaging plots and interesting themes.  They explore topics such as love, marriage, redemption, forgiveness, and pride just to name a few.  They will not only make you appreciate the setting of 19th century England, but they will also make you become more contemplative about your own life in the 21st century.  I invite you to stop by my blog and read the full reviews of these books as well as the plethora of other great historical fiction novels I have reviewed.

I am a High School Latin/Ancient Greek/History teacher, avid reader, N.Y. Giants fan, and Rush (as in Canadian Prog. rock) fan. Some might say that my reading choices are rather eclectic.  I enjoy reading a wide range of books from Classics to historical fiction, to history and travel writing.  I especially like to support small press and indie authors.

I read serious literary fiction with well-developed characters, mellifluous prose and an interesting plot.  The philosophy behind my blog is threefold; I spread the word about books through my reviews to readers who are likeminded, I give away books to my readers to spread around the enjoyment of good books. Lastly I believe it is important to help authors connect a bit more with their readers through interviews and guest posts.

The best way for me to enjoy a good book is with a cup of Chinese black tea, steeped with the correct temperature of hot water and for just the right amount of time and finished off with a splash of raw milk.

My father was a book binder for 44 years, so yes, I actually am the “Book Binder’s Daughter.”