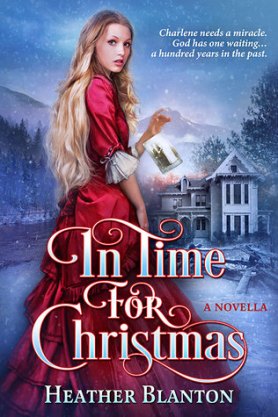 A story of Charlene Williams, a woman trapped in a dangerously abusive marriage. Disappointed that God hasn’t gotten her out of it, or even hears her prayers at all, she has shut down emotionally. When husband Dale becomes suspicious of her daily chats with the mailman, he whisks her out of town and abandons her on his family’s ranch—an isolated, dilapidated place no one has lived on for over forty years. With the promise that he’ll be back in a few days, he knocks her unconscious and leaves.

Charlene wakes up on the ranch—a hundred years in the past. Almost instantly she is drawn to Billy Page, Dale’s great grandfather. The connection is powerful and mysterious, but should she risk falling in love with a ghost? What’s going on here? Is Charlene dead, dreaming, in a coma, or simply experiencing a gift from her heavenly father? She’ll learn one thing for certain: God does see the tears of his children.

Yes, it was once again cover love. I was intrigued by the woman on the cover, her dress and the beautiful house in the background.

No, I was not prepared for Charlene’s story. This novella dives right into the thick of things.

Charlene is the daughter of a pastor, and married her husband in a rush. Everything changed after that. The abuse set in, both verbal and physical. To top it off, Dale thinks she’s having an affair with the mailman! To say the least, he’s beyond certifiable.

Charlene has secluded herself from her family since her marriage. She no longer goes home for the holidays, and in fact rarely keeps in touch with them. Dale has a threatening hold over her that makes contact with her family rough and difficult.

Dale’s plan is to drop Charlene off in the middle of nowhere on his family’s dilapidated, rocky ranch where there won’t be another soul for miles, let alone heat and food. Something about being at the Rocking J sets Charlene in the past, and it is most definitely a strange blast from the past. She comes face to face with Dale’s grandfather, Billy Page, and sets off a chain of events that sets even Dale on the edge of fear.

I hated Dale, with a passion, as did Billy Page. It was odd having Charlene blast into the past and set off a ripple effect in time, revealing to Billy the horror that is his grandson even though Billy doesn’t know that little detail. All he knows is that he wants to beat the crap out of Charlene’s husband…and he gets his chance. It seems the time travel is not limited to just going back in the past… 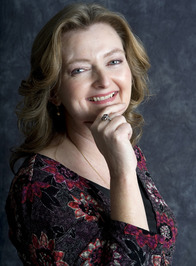 I started writing when I was five and have worked as a journalist since high school. Initially, I wrote for my high school and hometown newspapers, the campus newspapers at Western Carolina University and UNC-Chapel Hill, and I also served as editor of the Western Carolinian. While freelancing off and on over the years, I’ve spent most of my career in marketing and communications, which allowed me a challenging mix of journalism, business writing and advertising copywriting.

My book, A Lady in Defiance, became a best-seller in 2012 and now I am blessed to be writing full-time. Thank you so much for sharing your time with me!

One thought on “Review: In Time for Christmas”