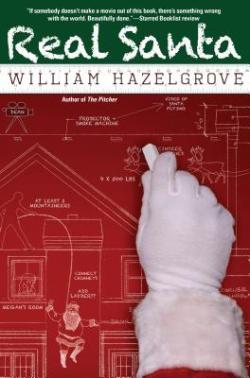 George Kronenfeldt is an unemployed engineer with one shot to keep his daughters belief in Santa intact. When Megan tells him the only way she will believe in Santa is if she can videotape him and then tells her fourth grade class she will prove the existence of Santa Claus by posting her video to YouTube, George realizes he must become the Real Santa. He devises a plan to land nine reindeer on his roof and go down his chimmney, hiring a broken down movie director who eventually has him funding a full scale production that bankrupts him and and threatens his marriage. When George goes to find the Real Santa to help him, the line between what is real and magic is crossed. Real Santa is a funny heartwarming story of parenthood gone wrong and illuminates what lengths parents will go to keep their children happy.

“SO, IF ALL the icecaps are melting, where will Santa Claus go to build his toys?”

Barbara Worthington frowned at the boy in the back row. Leave it to Josh Pataki to throw the class into a tailspin. The fourth graders had been sedate, even bored; now their little hands were shooting up all over the classroom.

“Well, Josh, think about it. How cold do you think it is in the North Pole? Those are incredibly hostile conditions. How long do you think a man with a beard and a red suit could survive up there?”

Mrs. Worthington looked at her class, and Josh Pataki in particular.

She was at the long end of her tether. Next year she would retire after forty years of teaching. Forty years. And for forty years she had been fielding questions about Santa Claus.

“I don’t understand what you mean,” Josh said through his coke-bottle glasses and stoppered nose. He had been a walking plague all year, and now he was doing the wrist roll with his nose.

Mrs. Worthington handed him a Kleenex, walking in front of the twenty-five sets of eyes of Ridgeland Elementary.

“Well, Josh, Santa Claus supposedly lives in the North Pole in brutal subzero temperatures with an ice pack surrounding the pole and unbelievable snowstorms. Not much lives up in the North Pole
even with global warming, which by the way has not been proven. So my question is simply, how would Santa Claus survive up there?”

Josh rolled his shoulders. “He would live in his complex built by elves like in Santa Clause 2.”

“Children, we are not going to stop our science hour to talk about Santa Claus.”

The hands started to fall until there was only one arm still up in the back. Mrs. Worthington motioned her hand down, but the kid’s hand stayed up there anyway. This was all Megan Kronenfeldt. The girl was bright, independent, and as literal as an accountant. She had a habit of calling out points that contradicted what Mrs. Worthington had mentioned a week before. She was almost a savant.

“Then what I understand you to be saying, Mrs. Worthington, is there is no Santa Claus in the North Pole because no one could survive without a facility and you don’t believe there are the elves or anybody else to build that facility.”

Mrs. Worthington stood with a faint blush coming to her cheeks.

She saw the e-mails raining down from above. Parents would crash the school server with their onslaught of indignation that she dared to destroy the myth of Santa Claus. Deloris Ketchum had been forced into early retirement for saying that Santa Claus was a myth. The parents had e-mailed the district, the superintendent, even the mayor. Deloris retired five years early with just half of her pension.

And now Mrs. Worthington was standing in the same crosshairs. “Well, Megan, I’m just saying that weather conditions are harsh in the North Pole and that people must be prepared to meet those conditions … including Santa Claus.”

Megan stared at her, and Mrs. Worthington had a sudden image of Natalie Wood in Miracle on 34th Street staring down her mother and saying, “He’s just a nice old man with whiskers, but he’s not really Santa Claus.” Megan’s eyes stared at her in the same disbelief as that young child star.

“That is not what you said, Mrs. Worthington,” she countered, shaking her head. “You told us to think about it and inferred it was too cold for Santa Claus to survive and that elves could not really build a facility for him to build his toys, therefore, ergo, there is no Santa Claus.”

Ergo! Ergo! Where do these children get their words? Maybe it was better she was retiring. These were not the same children she started with in 1975. These children surfed, texted, tweeted, Skyped, downloaded, and used words like ergo.

“Now, Megan, I did not say that,” she replied, smiling icily. ”Let’s not put words in my mouth.”

“Yes you did. You said that, Mrs. Worthington,” Josh chimed in. She glared at Josh Pataki, and he slumped down in his chair. She turned to Megan sitting at her desk with her hands clasped and her two pigtails sprouting like antenna. “Now, Megan, of course there is a Santa Claus. I was just pointing out that there are certain conditions we must be cognizant of and with global warming—”

“You didn’t say that, Mrs. Worthington. You said that elves couldn’t build the type of facility that Santa Claus required. I think what you are really saying is that you believe there is no Santa Claus.”

Mrs. Worthington stared at the child. This was the same one who corrected her explanation of the Internet, saying the Department of Defense had this capability much longer than people knew and the network had been in place for a long time except they didn’t want to release the technology to the general public. This walking science book was now boring down with her hard twenty-first century logic.

“Mrs. Worthington, you said, think about it, there are very hostile conditions in the North Pole and that a man in a red suit and a beard really couldn’t survive—”

The fourth grade of Ridgeland Elementary stared at her. Megan tilted her head and squinted.

“I didn’t think Santa Claus gave financial products, Mrs. Worthington. Mrs. Worthington stared at Megan as the bell rang. She sat down behind her desk while the children put on their hats and gloves. She closed her eyes and felt the stare. Megan Kronenfeldt stood by her desk.

“Mrs. Worthington, I thought pensions were regulated by the state. I’m not sure Santa Claus could provide you with one of those.”

“Believe me, Megan,” she said wearily, “he’s bringing me a pension.”

Megan rolled her small shoulders fitted to her purple backpack.

“Oh, well. He must have filed an exception then to state laws.”

George Kronenfeldt is one crazy guy. After losing his engineering job, he proceeds headlong into a plan to keep his daughter believing in Santa…even if it means breaking the bank.

Megan Kronenfeldt is her father’s daughter and requires proof of Santa’s existence, so George has agreed to let her videotape Santa to put on YouTube and take back to her class. Her teacher is worse than The Grinch, and all but outright Denied Santa’s existence.

George ropes his father into helping him with his plans, as well as those helping him pull off the show. Things start to exponentially grow and get a little out of control. George and the crew have one shot to get things right for Megan, so he does his research, which brings him face to face with Kris Kringgle…who really thinks he is Santa.

This novel does teeter on the adult side on the language scale, but I believe it to be fitting for the parts it appears. I enjoyed seeing George’s growth throughout the novel, and his budding relationship with his children from his first marriage. His daughter, though, drove me crazy! Such an ungrateful person.

I did start worrying the closer that Christmas approached, especially with that Grinch Mrs. Worthington on her anti-Santa rampage. I enjoyed the humor of the Kronenfeldt so very much. I would definitely recommend Real Santa, if only to make you laugh!

William Elliott Hazelgrove is the best-selling author of eight novels, Ripples, Tobacco Sticks, Mica Highways, Rocket Man, The Pitcher, Real Santa and the forthcoming Jackpine and The Pitcher 2. His books have received starred reviews in Publisher Weekly,Kirkus and have been selected as Book of the Month Selections, Junior Library Guild Selections, ALA Editors Choice Awards and optioned for the movies. He was the Ernest Hemingway Writer in Residence where he wrote in the attic of Ernest Hemingway’s birthplace. He has written articles and reviews for USA Today and other publications. He has been the subject of interviews in NPR’s All Things Considered along with features in The New York Times, LA Times, Chicago Tribune, Chicago Sun Times, Richmond Times Dispatch, USA Today, People, Channel 11, NBC, WBEZ, WGN. His most recent novel, The Pitcher is a Junior Library Guild Selection and was chosen Book of the Year by Books and Authors. net. His next book Jackpine will be out Spring 2014 with Koehler Books. A follow up novel Real Santa will be out fall of 2014. He runs a political cultural blog, The View From Hemingway’s Attic.

There is a $25 Amazon gift card up for grabs!

Open only to those who can legally enter, receive and use an Amazon.com Gift Code or Paypal Cash. Winning Entry will be verified prior to prize being awarded. No purchase necessary. You must be 18 or older to enter or have your parent enter for you. The winner will be chosen by rafflecopter and announced here as well as emailed and will have 48 hours to respond or a new winner will be chosen. This giveaway is in no way associated with Facebook, Twitter, Rafflecopter or any other entity unless otherwise specified. The number of eligible entries received determines the odds of winning. Giveaway was organized by Kathy from I Am A Reader and sponsored by the author. VOID WHERE PROHIBITED BY LAW.