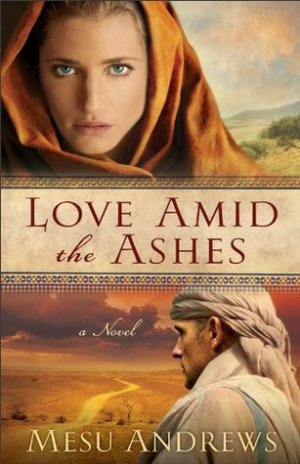 Readers often think of Job sitting on the ash heap, his life in shambles. But how did he get there? What was Job’s life like before tragedy struck? What did he think as his world came crashing down around him? And what was life like after God restored his wealth, health, and family?Through painstaking research and a writer’s creative mind, Mesu Andrews weaves an emotional and stirring account of this well-known story told through the eyes of the women who loved him. Drawing together the account of Job with those of Esau’s tribe and Jacob’s daughter Dinah, Love Amid the Ashes breathes life, romance, and passion into the classic biblical story of suffering and steadfast faith.

This was a difficult book for me to get through for a few different reasons.  First, it’s heavily based on the Bible. I’ve shared before my experiences with religious institutions and preachy, pushy books. At the beginning, I felt this book fit into that category, so the take-off wasn’t too fun.

The second reason I had difficulty continuing to read this book was the sheer number of names of actual characters in the book, or constant references to characters of family and lineage. I seriously needed to sit down and do a character mapping chart to help me keep all of them straight…except I didn’t have time for that. I’m sure it would have made things easier, but really, why should I need to do that as a reader? I shouldn’t. That was overwhelming.

The final thing that really got to me was the extremely vivid description and detail. Don’t get me wrong, I love details to give me a clearer picture of the characters and setting. In this case it was overkill. I found myself skimming and skipping many different chunks of the book because it seemed irrelevant to the plot.

I wanted to DNF this book several times in the beginning, but then the plot started picking up and things got rolling. I even mentioned last week on WWW Wednesday that I had to keep reminding myself why I was reading this book. I didn’t want to give up, and I surely didn’t want to be scared away by the detailed descriptions.

The story revolves around Job, his family, and his religion. The outlining story follows the Book of Job from the Bible quite well – a prosperous, Godly, family man who loses his wealth, children, and his own health through some disastrous events.

Job’s story is intertwined with that of his wife, Sitis, and Dinah, daughter of Jacob. Sitis was an Ischmaelite princess – and worshiped the idols. In many ways she is portrayed as an extremely selfish woman, so it was hard for me to accept her love for her husband. It was very conflicting. Several characters kept pointing out that Job’s downfall was the punishment resulting from taking Dinah into his household (more on that below), but the entire time I kept thinking about the actions of his wife, which toward the very end of the book is called to attention.

Dinah, unlike Sitis, was the ostracized character for the large majority of the book. She was the perfect scapegoat, as well: a beautiful woman with a kind spirit. Her first marriage ended in disaster, and the stories of her treacherous behavior (the viewpoint of pretty much the entire population) has followed her for over twenty years before Job seeks her out. She lived in shame for years, and continues to do so until Job makes a breakthrough with her. One of the strongest tenets Job teaches others in this novel (besides faith in El Shaddai) is forgiveness.

Forgiveness is like an olive tree, mistress. Once it takes root, it will grow, and it’s hard to kill.

Growing up, I heard the phrase “So-and-so has the patience of Job,” but I never quite understood it until reading this book.

Indeed, the same could be said for me. The man has more patience than the whole of a country! I continued to be surprised by his patience, especially in the presence of some insufferable characters and even when others made it very clear to him that he was being punished by El Shaddai. Still, he persevered and believed. His relationship with Yahweh calls into question the rights of a follower to question and be angry with El Shaddai. Sometimes that is the emotion is expressed in moments of fear and utter despair, which surely fit Job’s situation.

Job’s fury peaked at these selfish old fools whose abba’s dead body was barely cold in the grave before they pawed at the inheritance and brawled like children. He promptly walked over to the ridiculous, rolling elders and kicked dust in their faces.

Even though the material of this book was largely religious and some heavy duty stuff, these two lines made me giggle…so much so I went back to re-read them a couple times.

“Mistress, did he say you were going to be his wife? When did he find the time to like you?”

“What does that mean, Zophar? When you don’t know what to say, you spew forth this intellectual gibberish with many words and little meaning.”

I enjoyed various aspects of this book, most notably the characters’ relationships with one another. There are many examples of character depth as the novel progresses, and I was surprised by the growth that Sitis displays over the course of the novel.

Mesu Andrews is an author and speaker who has devoted herself to passionate study of Scripture. Harnessing her deep love for God’s Word, Andrews brings the biblical world alive for her audiences.

Mesu and her husband, Roy, have two grown children and (Praise God!) a growing number of grandkids. They live in Washington, where Roy teaches at Multnomah University. They have a Rottweiler-pitbull named Bouzer who keeps Mesu company while she writes.

She’s published two books, Love Amid the Ashes and Love’s Sacred Song. Two more are scheduled for release with Revell in March of 2013 and 2014.

4 thoughts on “Review: Love Amid the Ashes”