It’s been six months since Charlotte and Kyle broke up, and the Husband Maker strikes again. Kyle is officially engaged, while Charlotte is still nursing a broken heart.

In an effort to get Charlotte out of her rut, she and her best friend decide it’s time for some good old-fashioned matchmaking. While Aleena arranges for Charlotte to meet up with a handsome Scottish tourist, Charlotte gets her two best friends together. But when sparks start to fly between Aleena and Angus, Charlotte is left feeling more alone that ever–at least until the charming Scotsman becomes more than just a safe, rebound guy and teaches her that maybe, just maybe, she can dare to open her heart again.

I should have felt uncomfortable talking about guys and dating with a man I was sort of dating for only the second time, but I didn’t. There was something strangely easy about talking to Flynn. Maybe it was the fact that he lived on the other side of the world that seemed to give me the freedom to say what I was thinking instead of filtering myself. Or maybe it was just that he was warm and friendly and had a quick, good-natured smile.

“Yeah. I’m still sad about that. He’s engaged now.” Flynn waited, like he expected me to say more. “But it’s not just him. I sort of have a dating reputation that isn’t easy to live with.”

“You have a reputation?”

I laughed. “That didn’t come out right. Does a girl having a ‘reputation’ mean the same in Scotland that it does here?” I put air quotes around “reputation.”

“Probably. But you don’t seem like a girl with that kind of reputation, so you must mean something else.”

I nodded. “I do.” And then I told Flynn about being called the husband maker. I didn’t go into specifics about every guy, but enough that he understood I wasn’t joking and that it was a well-earned nickname. He asked a few questions, but mostly he listened without laughing at me.

When I finished talking, he looked thoughtful for a few minutes. I started to think he had nothing to say about the sad tale I had just shared, but finally he spoke.

“You’re lookin’ at it as a bad thing, but I think that’s wrong.”

“There’s a good way to look at it?” I glanced at him skeptically.

“Ya make men think about growin’ up and settlin’ down. So they do.”

“With someone else.” I was glad I needed to watch the road. I didn’t want to look at him looking at me.

“I guess they weren’t the right one for you. But Charlotte—” why did I melt when he said my name?—“ya make them think gettin’ married would be a good thing. It might not be great for you, but I think you should take it as a compliment.”

I didn’t speak. For the second time in two days, someone had chiseled away at the shell that had been forming over my once hopeful heart. I blinked hard. It was one thing to feel comfortable enough with Flynn to tell him about my nickname. It was quite another to melt into a weepy mess when we hardly knew each other. But his words did something to me. They made me a little teary, but that wasn’t all. They softened some of that shell. For more than six months, fear had been calcifying there, making my hope harder and harder to find. Would every man find happiness with someone else? Would there ever be a man who found his happiness in me?

“Thanks, Flynn,” I finally said. I had never been so open about dating and my worries with a man before. I had always been afraid it made me look lacking in some way. But Flynn was easy to talk to. I wondered if it was because this was a short-term arrangement or if it was just Flynn. Whatever it was, the openness was nice.

“Maybe I should be the one who’s scared, aye?” His voice was teasing again.

“You sure you want to call this a date?” I asked. “Are you ready to go home and get married?”

Yes, we find out, and I was actually surprised. I didn’t expect her.

This book picks up where the first left off, and Charlotte takes up her friends’ encouragement to act as handsome Scotsman Flynn’s tour guide. They began building a great relationship and I will say that I wish I had a Flynn in my life, especially as my BFF. He is the most compassionate, sweetest guy I could ever imagine.

In the meanwhile, Charlotte is setting up her BFF Aleena with her childhood BFF Angus. They make a cute couple, but it’s like seeing an entirely different side of them both when they are together…and it gets to Charlotte. But that’s not the only thing getting to Charlotte. Angus is acting strangely, quite rudely for a BFF. He even almost makes Charlotte cry on her birthday because he’s so cruel.

Oh, her birthday. It reveals a LOT later on, which leads to seeing a different side of Charlotte’s relationship with her twin brother, Will. It also sparks the idea for her to take a trip, during which she has a series of epiphanies in a beautiful, peaceful land.

She comes back to San Francisco changed for the better, with her chin up and face held to the sky. I was so hopeful in these moments. I saw the light at the end of the tunnel, but Karey White had other plans in mind for Charlotte.

I am anxiously awaiting the third book to see where Charlotte will go in her life.

I am the oldest of eleven children, born to parents who were either saints or crazy, maybe both. They thought we were all capable of being professional athletes or broadway stars. They weren’t right, of course, but they did help us have self-confidence.

I have the greatest family. A patient husband who makes me laugh and four clever, good-looking children–two boys and two girls. I adore them all. 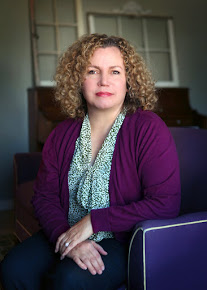 Through the years I’ve been a student, a teacher, a secretary, a clothing designer and seamstress, a wedding cake maker, a crafter, a scrapbooker, a cook, a homework helper (until they pass me in math, somewhere around the third grade), and a fan at my children’s sporting events. Before I die, I’d either like to be a great housekeeper or have the money to hire a maid.

I’ve been writing since Jr. High, when I was hired by a county newspaper to do a Happenings column about our little town of about 300 people. I got paid by the word so every week I called every family in town and got their news. It wasn’t high-brow journalism but the column earned me a little spending money.

On our way to Aspen, CO, my sister, my two oldest kids and I were hit head-on by a drunk driver in a stolen car. Although we suffered serious injuries, we all survived.

Candy isn’t worth eating unless it’s chocolate. (See’s are the best.)

When I was a child, my family bought and renovated an old school-house. It was a wonderful place to live in spite of the bats that flew over our heads at night.

I’ve been told that my naturally curly hair doesn’t get longer, it gets bigger.

I’ve always liked game shows. Everything from Wheel of Fortune and Jeopardy to the reality-style game shows like Amazing Race, Survivor, and Top Chef.

Nothing makes me happier than being with family and friends eating good food, sharing good conversation and a few laughs. That might be why Thanksgiving is my favorite holiday.

$25 Amazon Gift Card or Paypal Cash. Ends 11/30/14.
Open only to those who can legally enter, receive and use an Amazon.com Gift Code or Paypal Cash. Winning Entry will be verified prior to prize being awarded. No purchase necessary. You must be 18 or older to enter or have your parent enter for you. The winner will be chosen by rafflecopter and announced here as well as emailed and will have 48 hours to respond or a new winner will be chosen. This giveaway is in no way associated with Facebook, Twitter, Rafflecopter or any other entity unless otherwise specified. The number of eligible entries received determines the odds of winning. Giveaway was organized by Kathy from I Am A Reader and sponsored by the publisher. VOID WHERE PROHIBITED BY LAW.

One thought on “Review + Giveaway: The Match Maker”