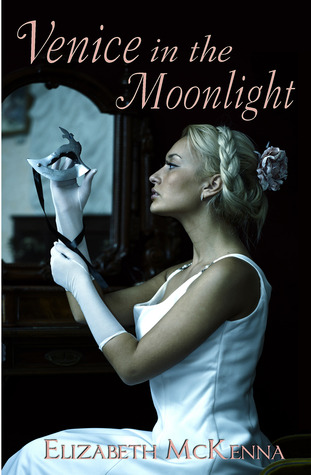 Take a vacation from the London ton and visit Venice in the Moonlight!A Story of Vengeance, Forgiveness, and Love After her husband’s untimely demise, Marietta Gatti is banished from the family’s villa by her spiteful mother-in-law. She returns to her hometown of Venice and her only kin—a father she hasn’t spoken to since her forced marriage. Her hope of making amends is crushed when she learns she is too late, for he recently has died under suspicious circumstances. Grief-stricken, Marietta retraces her father’s last night only to discover someone may have wanted him dead—and she may be next. When the prime suspect turns out to be the father of the man she is falling in love with, Marietta risks her future happiness and her life to avenge the death of a man she once hated.Elizabeth McKenna’s latest novel takes you back to eighteenth century Carnival, where lovers meet discreetly, and masks make everyone equal.

Marietta Gatti is the daughter of an artist, and as such she is not in the upper echelon of the nobility in Venice. Not until, that is, her father forces her to marry into it. Marietta hates her husband, and I can’t say I blame her. She is an independent woman in a time when women were playthings, and this quote was my favorite:

The family money could buy almost anything – anything except a place in heaven. Her husband roasted in hell.

She also harbors hatred for her father, who not only left her to this terrible marriage, but forced her into it. (It really was for her own good.) She has shunned him and his letters, until the unfortunate (or fortunate for her) death of her husband. She now goes to seek her father out and uncovers something sinister hiding within the most noble families of Venice.

Marietta stared at her father’s painting. There were so many things she wanted to say when she saw him in a few days. She was still furious, but she was also thrilled that he had regained his inspiration.

After the death of her husband, Marietta sets off with her maid in search of her father. All of a sudden many characters are introduced and for a while I had a hard time keeping up with who was who, because they then separated out into groups. But eventually I got back on board and could place everybody.

Marietta’s first discovery in Venice is that a few noble families, the rulers of Venice, owe her father quite a bit of money for his paintings. Shortly after he made his rounds to collect, he was killed. Marietta sets off in the dark of night to uncover the truth behind these matters, and discovers even more. In her journey, she meets and befriends her father’s mistress and best friend. Both of the people who her father last saw try to help her.

“The rich no longer are so rich, yet they act rich.”

Marietta also is thrust into the world of nobility when Nico Foscari comes to the rescue of a traveling carriage and takes the ragtag group of vagabonds under his roof. Nico is a man of many things. He is partially blind, and wears darkened glasses always. He is one of the biggest rakes in Venice, and his father was one of a few who commissioned paintings from Marietta’s father and never paid up. Now, Nico has also commissioned a Gatti artist.

Nico shrugged. “I’ve learned a few things over the years. You’d be amazed at how many people think nothing of taking advantage of a blind man.”

“Were you following me?”

As Marietta puzzles through the nitty gritty of her father’s death and the craziness that she has uncovered, she is also spending much of her time painting Nico at his private townhouse.

Nico’s best friend is Casanova, who is an odd duck to say the least. In the debauchery sense he is Nico’s equal and they enjoy many a night out on the town…until Marietta comes along. Nico trusts Casanova because he has no intentions or motivations in his friendship with Nico…until Nico hears Marietta’s story. Then things start to change rapidly. He is left wondering who he can trust, and how to make things right.

As the book progressed, I saw a lot of character development in Nico. I was very pleasantly surprised with the inner workings of his mind, but it also made sense. It was just a little heartbreaking to spend your whole life thinking something like this:

Part of him hoped she was here to see him and not his father. But his father spoke the truth as harsh as it as. Only courtesans could love an almost blind man, so courtesans would have to do.

I enjoyed this book immensely. The plot line centering around Marietta’s father’s death was very well planned out and implemented in the novel. Marietta’s social standing, tarnished in a way by her father’s habits, is something she has to strive to overcome – as well as the whisperings of why she is not with her late husband’s family. Nico is a man well accustomed to the privileged life – even as a blind man – and that in itself is what creates his very flawed character.

Venice in the Moonlight was a relatively quick read, and I enjoyed the historical aspect of this period of time in Venice. It also had a few scenes for the much celebrated Carnival!

Elizabeth McKenna works as a full-time technical writer/editor for a large software company. Though her love of books reaches back to her childhood, she had never read romance novels until one Christmas when her sister gave her the latest bestseller by Nora Roberts. She was hooked from page one (actually, she admits it was the first love scene). She had always wanted to write fiction, so she combined her love of history, romance and a happy ending to write her debut novel Cera’s Place. Her short story, The Gypsy Casts a Spell, is available for free on her websitehttp://elizabethmckenna.com/. She hopes you will enjoy her latest novel, Venice in the Moonlight, as much as others have enjoyed her previous works.Elizabeth lives in Wisconsin with her understanding husband, two beautiful daughters, and a sassy Labrador. When she isn’t writing, working, or being a mom, she’s sleeping.

3 thoughts on “Review: Venice in the Moonlight”

After the pillow thieves (AKA Baby and Revel) struck the other day, my dad asked what Poco was using.
True story. 😂 Come see me!
Four days ago I physically could not do this.
After my post-op visit yesterday, we went to chill at Chick-fil-A for drinks. This was in their entryway. 😂
BEFORE and AFTER almost all the tubes and wires were removed following my hepatectomy. I am thankful all I have to worry about now when getting up is me and not yanking something out or having the heavy monitor to carry around and be stuck on my chest. And as you can see, my oxygen was NEVER in right. So, clearly, I didn't need it. 🙄😂
Yesterday was the last day I locked my door. Today is the last time I unlocked my door. I have to say goodbye to "my hole", my classroom for the past 8 years today. After today, I'm no longer D117. I'm no longer in the 6th grade hall.