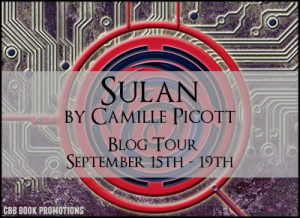 Welcome to my tour stop for Sulan by the beautiful Camille Picott. This is a YA Dystopian/Cyberpunk novel.  This is a review-only tour that runs September 15-19. Check out a few different reviews from participating blogs and form your own opinion. Start with the tour schedule…after reading my review and entering the giveaway, of course! 🙂 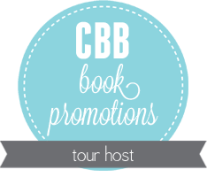 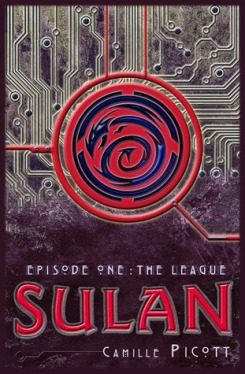 Sixteen-year-old Sulan Hom can’t remember life before the Default—the day the United States government declared bankruptcy. As a math prodigy, she leads a protected life, kept safe from the hunger and crime plaguing the streets of America. She attends the corporate-sponsored Virtual High School, an academy in Vex (Virtual Experience) for gifted children.

Beyond the security of Sulan’s high-tech world, the Anti-American League wages a guerrilla war against the United States. Their leader, Imugi, is dedicated to undermining the nation’s reconstruction attempts. He attacks anything considered a national resource, including corporations, food storage facilities—and schools. When Sulan witnesses the public execution of a teenage student and the bombing of a college dorm, she panics.

Her mother, a retired mercenary, refuses to teach her how to defend herself. Sulan takes matters into her own hands. With the help of her hacker best friend, Hank, Sulan acquires Touch—an illegal Vex technology that allows her to share the physical experience of her avatar. With Touch, Sulan defies her mother and trains herself to fight.

When Imugi unleashes a new attack on the United States, Sulan finds herself caught in his net. Will her Vex training be enough to help her survive and escape?

I’ve read one book by Camille Picott before, and I enjoyed it. I was sure I’d enjoy Sulan, but I loved it!

How am I supposed to concentrate on anything when I’m worried about getting blown up or shot in the head.

Sulan lives in a dysptopian world. She lives in the time following the Default, where large corporations dealing in arms and weaponry dominate. Her father works for one, with his crazy math self.

Sulan keeps her affinity for math quiet. Despite being a prodigy, she purposefully keeps herself on the low side of the gradebook. She attends school in a virtual world in order to keep her identity and location a secret, as do all of her classmates and friends. She’s never met them face-to-face.

After witnessing the horror that Imugi, leader of the Anti-american League, wreaks across the United States is enough for Sulan. She wants to defend herself, but her mercenary mother refuses to teach her….so Sulan finds a way.

Sulan takes some severe risks to protect herself, and in the process meets someone who is pretty crafty in such a high tech world. Baldy, who was Sulan’s opponent, is now her partner in the Cube.

“Sounds like you’ve met the male equivalent of yourself,” Hank says the next day. “Parental issues. Pent-up rage. Violent tendencies.”

“Isn’t’ it great?” I grin at nothing in particular.

When Sulan’s virtual high school is requiring all the students to actually move to a corporate compound, things start getting fishy. Sulan is in for the ride of her life!

The hype, the fear and the world building drew me in, but the characters are what made this book. Hank and Sulan have as solid a relationship as can be had, being virtual classmates and all. Hank and Billy are so geeky in their competitiveness, that turns out to be a cover for them both!

Sulan finds herself in the middle of an overthrow, along with Hank and Billy, and her rescuerer Taro. Hank and Billy, like Sulan, belong to prominent families, and they discover Taro’s identity…and his father’s.

“What good are convictions if I can’t hold onto them in a moment of crisis.”

When the moment comes when the four of them need help the most, Sulan is not let down, but she is creeped out by one particularly strange man in a frog costume.

The dialogue between characters was strong and fitting, and that drew me into the relationships between the characters. The only one I had some hesitation with was Sulan’s mother. She didn’t make any sense to me, until toward the end of the book.

Sulan now lives in a world that is going to change vastly and quickly. Picott is saving that for the next book in the series, and I can’t wait to read it. I want to see what happens to Sulan and her friends.

Camille Picott is a fifth-generation Chinese American. She writes science fiction and fantasy books with Asian characters and/or Asian settings. Camille grew up reading speculative fiction stories largely devoid of Asian characters and culture. This, coupled with a passion for her heritage, is the reason she strives to bring some aspect of Eastern myth, legend, culture, and ethnicity to all of her writings.

There are two $5 Amazon gift cards up for grabs in this giveaway.