Y’all! I am so obnoxiously fangirl excited to be sharing an amazing author with you today — and one that is so sweet and darling in real life. I reviewed his book a while back, Lost on the Edge of Forever. You can read my review here.

I want to tell y’all: Michael Haley may be a new and up and coming author, but he is as genuine and humble as they come. Before my review of his book ever posted, he had already scoped out my blog. In the week before my review, I’d mentioned his book in two posts. I was on an emotional high for several days after finishing the book, and it kind of temporarily skewed how I felt. But then I worked it out and started making connections and I was a little blown away.

He admitted (in a beautiful email later) that what I said pre-review made him nervous about my review. Yes, you read that right. After my review posted, I received a very heartfelt email from Michael. It was amazing – amazing that he took the time to find my email address, and to sit and think out what he sent me. We kept a brief correspondance from that email, and last month when I was thinking of who I could feature for guest posts and still be in line with this month’s September Sizzlers theme, I thought of none other than the man who wrote an extraordinary love story this year.

Despite having a newborn and a real job and going to night school, Michael agreed to write a guest post in a heartbeat.

Real Guidelines for Writing Imaginary Sexual Encounters, for Women Audiences, as a Man.

So here are a few lessons I’ve learned about the unique challenge of convincingly writing about sex, as a man, that isn’t completely insulting to women. Some of these lessons were learned through trial and error and some through just error. Remember that there are no rules in writing, only principles. But one must know why the principle exists if one wishes to effectively break it.

It must be known, if only to the reader, that the characters are giving their consent to have sex.

This guideline goes when writing about any character of any gender, but especially so for male writers writing about female characters, and should only be broken when the writer is certain, and I repeat absolutely certain, that breaking it is what the book requires. If the reader senses that consent is being violated, than the scene will be read as a rape scene. If a rape is what the book calls for, then so be it. But be very careful to ensure that an otherwise lovely moment between two people doesn’t read horrifically because the reader is lacking the knowledge that both characters are actually interested in having a lovely moment. This detail might seem obvious, but remember writers – you know your characters.  Your readers only know what you tell them. Make sure you tell them what they need to know to envision the scene you want them to.

Don’t feel compelled to write graphically just because E.L. James does, as body parts doesn’t automatically equal credibility. But if you must be graphic (and I personally must be) then make sure both sexes are equally exposed—in every sense of the term.

The number of stories involving an always-naked bombshell—whose “layered” purpose is to first pleasure and then heal the frail emotions of fully clothed men—are too numerous to count. So if a male wishes to write a compelling story that isn’t patriarchal and sexist, make sure both characters are dynamically written with (ideally) different but complimentary conflicts of their own. And should these conflicts lead to paragraphs of description of the naked female, then don’t be selfish and devote paragraphs of description to his body too. Fair is fair.

Unless you’ve set up the scene very carefully, try to avoid the female telling the male things like “I’ve always wanted you, I’ve dreamed about you since, like, forever!”

The reason to avoid such obviously fantastical dialogue is that it belongs in a thirteen-year old’s Lord of the Rings/first sexual fantasy mashup. Which by default makes it sound like the character, and probably even the writer, is experiencing sex for the first time through the scene you’re lucky enough to be reading. Sexual fantasies in fiction can be fine, but it has to be clearly a fantasy for the character only, not for the writer attempting to live vicariously through the “desires” of their characters.

I’ll admit that certain plot considerations of my own book inspired me to break this guideline, although I took special steps to render this type of dialogue passable. One—the lead female character is aroused by words as much as touch, so for her to say something like this, less for his sake and more to herself on, wouldn’t come out of left field (and allows her to be as verbally obscene as I want her to be during sex with complete impunity.) Also, I made sure that the male diction that follows isn’t complimentary (which would be male fantasy) but contrasting (which would be reality.) So “I want you so bad, I think about you all the time…” follows with the insecure male thinking, “Yeah, right. That’s crap.”

The female should be the most beautiful woman in the world to the person who loves her, not necessarily to everyone else.

If you’re writing Notting Hill and the character falls in love with a celebrity, than it—might—make sense for everyone in the story to drop their jaws whenever the woman enters the room. The rest of the world isn’t so lucky to be blessed with the presence of air-brushed females. So don’t indulge in the long-running cliché that the woman is a modern day Aphrodite who seduces all within her gaze, and instead write a real woman, flaws and all. If the woman is real and thus not equally desirable to everyone, for either physical or personality reasons, than it will make the central relationship all the more special—and dramatic too.

There are other many other things to consider as well, such as placement of sex scenes (when do they happen in the story?) who is the one narrating those scenes (and what’s important to them?) what assumptions and biases the gender of the speaker is bringing to the encounter, do both characters have sufficient dramatic stakes in the encounter, does the sexual scene empower or belittle the woman, is the woman having sex because she wants to or because the writer wants her to, is my writing setting back all the gains made by progressive women…

And then, when presented with these dilemmas, my wife said to me, “I’m glad you’re concerned about all these things, but just write the damn story.” And ultimately, that’s what a writer has to do. Just make sure the story of your own gender isn’t the only one you’re telling.

Michael Haley was born in Cedar Rapids, Iowa, and cultivated its neighboring vicinities. He graduated with a degree in Psychology from Iowa State University, and now lives with his wife and little-dude-to-be in Bloomington, Illinois. When not writing, he loves indulging and dissecting books, film, and pop art from all canons and genres. Lost on the Edge of Forever is his first novel. 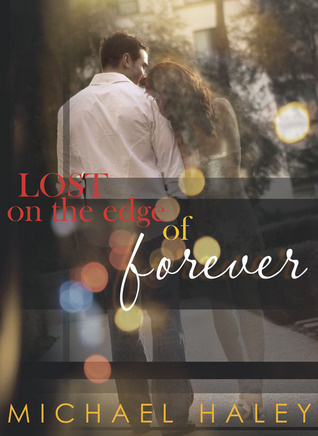 Leila, an ambitious and brilliant student, is murdered during her final semester at college, yet discovers she’s been reborn as a spirit resigned to haunt the school of her death. Alejandro, a listless and depressed freshman, arrives on campus eager to reinvent himself after eighteen years of awkwardness, as well as a devastating family tragedy, shake his sense of worth and faith to their cores.

The two lonely souls meet under the auspice of moonlit rain, and soon find themselves irrevocably, passionately attracted to each other. Leila discovers her spiritual body reawakening with sensations that make her feel alive again, and Alejandro discovers a kindred spirit who understands him like no one else. Intoxicated with each other, the impossible lovers begin to dream of finding a way to hold onto their own private miracle. Forever.

Yet how can Alejandro explain to skeptical friends and family that his soul-mate is dead? Why does Leila get the nagging suspicion that within their relationship lies the secret of her continued existence? An unexpected act of evil ignites these unavoidable questions, only to reveal in its aftermath the true purpose of Leila and Alejandro’s star-crossed romance. Will their love allow them to accept a profound destiny that surpasses time and perhaps even God, or is their love destined to die loud and young?