To living a life she desires with the man she loves, Clarissa Sullivan continues to teach poor, immigrant children and to agitate for the vote for women as she awaits Gabriel’s return to Boston. Will her stepmother leave her in peace or is her life about to change again in unforeseen ways?

Clarissa is the woman he now wants to marry, Cameron Wright renews his pursuit of her. Charming, wealthy and well-bred, he is perceived as the ideal gentleman for a blacksmith’s daughter. With Gabriel far from Boston and his return uncertain, why should Clarissa continue to reject Cameron?

After his banishment from Boston, Gabriel McLeod forges a new life in a remarkable city. Will the memories of the love he shared with Clarissa sustain him?

Will Clarissa overcome deceit and treachery and reclaim her love?

Oh, this book. How many of you think your mother-in-law is bad? Well, this book paints an ugly picture for Clarissa…almost like a historical version of Cinderella, without the stepsisters and no fairy godmother, just a beyond evil stepmother.

I snuck this one in while on my trip to Pennsylvania, and I am so glad I read it sooner rather than later. You can find my review of Banished Love, the first book, here. Clarissa is still in Boston, trying to continue on with her life even though Gabriel has gone west, after being blackguarded by Clarissa’s stepmother and her evil counterpart and cohort, Gabriel’s aunt. These two witches come into play quite a bit in this book, more so than in the first book, and their doings are far worse than in the first book.

Clarissa is pining over Gabriel, but he hasn’t written to her since leaving. Does he still feel the same? She continues teaching and deflecting the advances of her former fiance, Cameron, but it is harder and harder to do so with her stepmother plotting teas with ulterior motives and inviting Cameron over. Even her father’s adamant foot-down order that Cameron is not allowed in his house does not stop Clarissa’s stepmother, who convinces her husband to make Clarissa give up teaching and  be underfoot to learn the “proper” way to run a house, and be confined to her own home, a prisoner with no outlet. And this makes Clarissa’s stepmother even bolder in her actions and her inane matchmaking between Clarissa and Cameron. She goes too far and all but ensures that Clarissa will be forced to marry Cameron, or suffer untold ruin. During all of this, Clarissa meets Gabriel’s long-lost brother Jeremy, back from the war in the Philippines, and he is the one who grasps the idea of what Clarissa is keeping hidden. Also in a cruel twist of fate, the McLeod’s uncle Aiden surfaces, to learn that the nephews he was told were dead were indeed very much alive.

If only Gabriel would ask her to come to him…

This novel switched between Clarissa and Gabriel, and I felt that more time was spent with Gabriel than with Clarissa, so as to develop Gabriel’s new life out west. He meets up with a nice guy, who steers him into a mining town in Montana, derailing his plans for California. Gabriel finds work as a carpenter in this booming town and makes friends (and enemies) among his work crowd and Matthew’s. The Egan house is where Matthew and Gabriel and the bunch end up the majority of the time. Liam Egan works with Matthew in the mines, and Ameila Egan cooks and in general cares for the men, who all dote on little Nicholas. They are all trying to get Gabriel to get Clarissa out west and be reunited, and eventually she decides to do just that.

Clarissa sets off west with her brother Colin, and quickly discovers there is little trace of Gabriel where he said he’d be…and yet he has left the rumor mill running at full speed after leaving town with Amelia Egan. None of this bodes well for Clarissa, and even after they are reunited and things have been sorted out, Clarissa’s refusal to tell Gabriel what happened in Boston, and about what she learned as to why Cameron is forceful in his pursuit for their marriage, made me quite temperamental as a reader. There were several people telling her to just tell Gabriel, and just like in Harry Potter when Dumbledore gives Harry plenty of opportunities to tell him what is going on and Harry refuses, Gabriel gives her even more opportunities to tell him. Clarissa was such a flawed character at this point, afraid that Gabriel would not want her, that she almost made it come to that by her refusal to open up to him.

This teaser that Ramona shared about Reclaimed Love sums up the book beautifully: 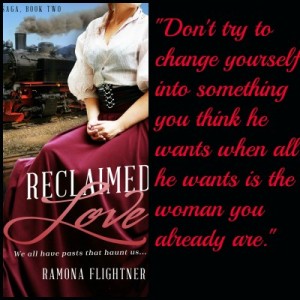 There are so many things that happen in this novel that I can’t share even a glimmer of it, but they are all important, and most important of all is Cameron’s hell-bent reason for following her west. I did not think that he would let things end as they had in Boston, and even goes so far as to lie to everyone that Clarissa accepted his offer of marriage.

Even though Colin has gone west on this journey with Clarissa, his character was very limited in this book, while on the flip side of that coin we got to see quite a bit of Gabriel’s uncle Aiden, who as a businessman had an interest in a particular company in Boston that is keeping quiet about its bankrupt status…

The novel ends on a sweet note, with no clear indication of what will come in the next book, but from what I know of Ramona Flightner and her write-by-the-pants writing style, I think she’ll be writing more for this series than she originally thought as characters and plot lines continue to develop.

I can, however, take some guesses and list out some hopes: 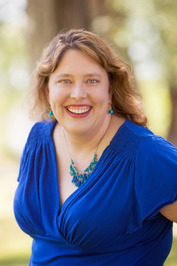