For all the stops on the tour, visit the tour schedule.

The war in Iraq ended for Lieutenant Freddie Williams when an IED explosion left his mind and body shattered. Once he was a skilled gamer and expert in virtual warfare. Now he’s a broken warrior, emerging from a medically induced coma to discover he’s inhabiting two separate realities. The first is his waking world of pain, family trials, and remorse—and slow rehabilitation through the tender care of Becky, his physical therapist. The second is a dark fantasy realm of quests, demons, and magic that Freddie enters when he sleeps.

In his dreams he is Frederick, Prince of Stormwind, who must make sense of his horrific visions in order to save his embattled kingdom from the monstrous Horde. His only solace awaits him in the royal gardens, where the gentle words of the beautiful gardener, Rebecca, calm the storms in his soul. While in the conscious world, the severely wounded vet faces a strangely similar and equally perilous mission—a journey along a dark road haunted by demons of guilt and memory—and letting patient, loving Becky into his damaged and shuttered heart may be his only way back from Hell. 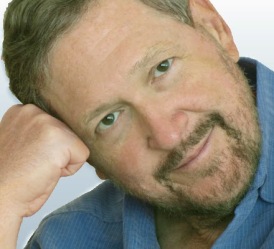 The urge to write first struck when working on a newsletter at a youth encampment in the woods of northern Maine. It may have been the night when lightning flashed at sunset followed by northern lights rippling after dark. Or maybe it was the newsletter’s editor, a girl with eyes the color of the ocean. But he was inspired to write about the blurry line between reality and the fantastic.

Using two fingers and lots of white-out, he religiously typed five pages a day throughout college and well into his twenties. Then life intervened. He paused to raise two sons and pursue a career, in the process becoming a well-known entrepreneur in the software industry, founding several successful companies. When he found time again to daydream, the urge to write returned. His novels include: There Comes a Prophet, Along the Watchtower, and the newly released The Daughter of the Sea and the Sky.

David and his wife split their time between Cape Cod, Florida and anywhere else that catches their fancy. He no longer limits himself to five pages a day and is thankful every keystroke for the invention of the word processor.

There is a giveaway for this tour. A $100 Amazon/B&N Giftcard or a Book Depository shopping spree of the same value, plus two print copies of Along the Watchtower will be given away. Open Internationally. Ends 7/7.

One thought on “Spotlight + Giveaway: Along the Watchtower”