This tour is for H.B. Bolton’s third book in the series, but she was kind enough to provide the first two books for me. For all stops on the tour, please hop on over to the tour schedule.

Life has returned to normal for fourteen-year-old Evan and his older sister, Claire. That is until Dunkle, a clever but stinky little imp, pays an unexpected visit to their school. He has come to take the siblings back to Sagaas, the mythical realm of the gods. Once again, a Relic from the ancient Mysticus Orb has fallen into the wrong hands. Only Evan and Claire, with their unique mystical abilities, can help find it. 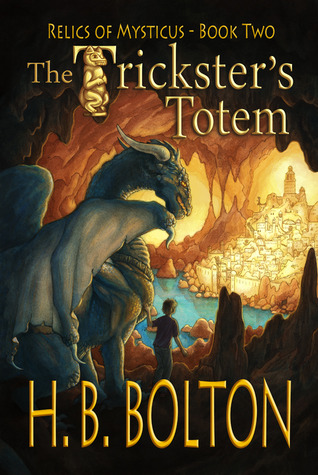 Through the power of the Trickster’s Totem, a coyote trickster has escaped. His laughter echoes throughout the realm, as he spreads mischief and mayhem. He burns an entire crop of popcorn, carves his grinning image into sacred artifacts, and things really get interesting when he shape-shifts into Evan’s friends.

Claire and Evan must capture the Trickster, retrieve the Totem, and be careful not to become sidetracked by robotic Steampunk animals, “sweet” pixie-like Pains, and a problematic mermaid … all while dodging Mothman-like aces. Most surprising, Evan discovers the true reason dragons exist in the Native American Spirit World.

This book is a middle grades book, and recommended for those who enjoyed the Percy Jackson series.

This novel takes Evan and Claire into another area of Sagaas, and one which I can connect to due to my heritage and more-than-average interest in: the Spirit World. In this territory of Sagaas, Evan and Claire meet a tribe, and the chief’s son, Chayton, ends up aiding them in their new journey. It seems that someone has released Mica, the Trickster, to wreak havoc on the land. Mica goes beyond his usual tricks, and is now destroying things and hurting people.

Mica is after the Trickster Totem, and ends up either running away from Evan’s band or stalking them unknowingly. The tricky thing about Mica is that he can shapeshift, and he uses that to his advantage and tricks Evan’s group.

In the first book, Claire and Evan learned they both had a special power (made stronger when in Sagaas), but in this book they discover they both have their own totem animals…and can transform into them. Evan’s was easy for me to figure out, but I had no idea what Claire’s totem would be. This is an element of Native American culture, and in the beginning, Chayton’s tribe members relay that Evan would discover his totem through his journey.

Mica leads the Band of Unlikely Heroes, which includes Evan, Claire, Dunkle, Chayton, the Trickster Totem protector and dragon Kehl, and the mermaid Amadahy, through all manner of danger and obstacles throughout the land. Evan keeps running off on side missions (always with one other band member), so the group decides to shackle him to somebody with a titanium band, forcing him to stay with the group.

They end up stuck with the Pains, small fairies, who wish to keep them captive. Later, they do get captured, sentenced and imprisoned by the C’iatqos, a group of robotic animals that force workers to mine cochinay, a powerful but dangerous substance. I did not foresee a good outcome of that situation, but in the end, the C’iatqos come to Evan’s aid.

Evan and the group feel betrayed when they confront a member because of one of Evan’s dreams. The very person who released the Trickster was walking among them the entire time! Later it is revealed that a mysterious man appeared in the dreams of three people: Evan, the Trickster, and the traitor (who is later redeemed and pardoned by the group), but Evan discovers who the man is at the last possible moment, and the Trickster reveals that all of their journey throughout the Spirit World was a cover up for the mysterious man: a powerful, greedy and traitorous immortal, who has somehow managed to be set free from his imprisonment due to his hand in the Avarice War.

I adored this book! I can’t say why exactly, because I can’t quite place my finger on it, but I know that the Native American aspect added to my enjoyment and ability to connect with this book. Chayton, Claire and later Evan all have the ability to transform into their totem animals. Plus, there are dragons!

In this book, there is some downtime during different aspects of their journey to recapture Mica and the Trickster’s Totem, but in those times I saw character development in Evan, Claire and Dunkle. The new members of the band I felt were slightly restricted, and through Evan and Claire’s reactions to the newbies, I felt one was immediately trusted and one was immediately held in slight suspicion (and the third was just forced upon them), and I felt that their reactions to these characters influenced my reactions and interpretations of these characters, even though as readers we knew nothing about them.

I felt the world building in this novel took a backseat to the adventure, whereas in the first book I think there was an even mixture of both. However, this was a fast-paced novel, and I feel there will be much more that comes to light in the next book, as there were some interesting tidbits that came to light at the end of this book.

However, H.B. Bolton, I had my eye on you! From the very beginning of this book, or I should say upon entering the Spirit World and all of the following events that transpire, I could not help but notice that Mica was either one step ahead or one step behind Evan and his group…and I got the distinct feeling that it was in some way a wild goose chase. In the end, Mica reveals just that, and what his wild goose chase was covering up…which is the premise of the third book, and I know without a doubt that this third book is going to be a level above the first two books, which are each extraordinary in their own realms of Sagaas.

Also in this novel, Bolton includes a listing of important characters and terms at the back of the novel (at least for ebook format), and many of the names or terms are a Native American translation, such as Chayton in Sioux means “falcon” and cochinay in Apache means “yellow  thunder.” To top off her reference guide, Bolton has included a listing of totems and their meanings, which is a wonderful feature and addition to the book. AND – yes, let me brag some more about this book – AND Bolton has also included a short self-guide to discover your totem. I can see this book being taught in language arts, and the totem guide would be a wonderful addition to include in instruction and research.

My animal totem is the wolf. What’s yours?

A magical part of H.B. Bolton’s childhood was being swept into worlds of enchanting

characters, fantastical creatures and extraordinary powers—simply by picking up a book. As a mother and a teacher, she was compelled to create imaginary worlds of her own in order to share them, not just with her children, but with all children. H.B. Bolton lives in Florida with her supportive husband and two highly spirited children. Shh, can you keep a secret? Not only does she write books for the young-at-heart, adventurous sort who yearn to dive into a good young-adult fantasy story, she also writes spellbinding, heart pounding women’s fiction. These particular books are written under the name Barbara Brooke, but that’s another story, altogether.