This tour is for H.B. Bolton’s third book in the series, but she was kind enough to provide the first two books for me. For all stops on the tour, please hop on over to the tour schedule. 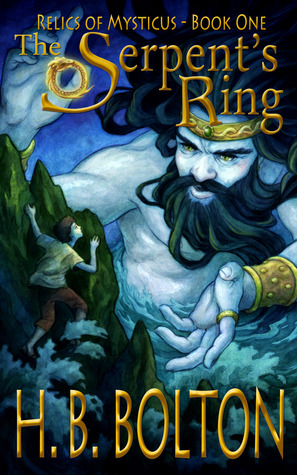 Evan and Claire Jones are typical teenagers, forced to go with their parents to yet another boring museum … that is, until something extraordinary happens to make their day a little more than interesting. After following a strange little creature into a closed exhibit, Evan and his older sister, Claire, discover the Serpent’s Ring, one of the magical relics formed from the shattered Mysticus Orb. Purely by accident, they have awakened its powers and opened a portal to Sagaas, land of ancient gods.

Before the siblings can comprehend what has happened, the Serpent’s Ring is wrenched from Evan’s hand by an enormous fish and flown back to Aegir, the Norse god of the sea. Evan and Claire, accompanied by a band of unlikely heroes, must retrieve the Serpent’s Ring before Aegir uses its immense powers to flood all the lands on Earth.

This book is a middle grades book, and recommended for those who enjoyed the Percy Jackson series.

This book is one crazy roller-coaster of a read! I don’t want to give anything away, so my review is going to be slightly different than usual. Indeed, Evan and Claire wander into a closed exhibit and start off a chain of events and a grand adventure. To give a quick summary of the book – one that I hope piques your interest for a young reader you know:

This book starts off like a typical family outing where the kids want to do their own thing and the parents want to be all family-y. It quickly turns into something similar to Night at the Museum, in combination with Harry Potter, as a Dobie-like creature, Dunkle, comes forth and requires the help of Evan and Claire to get the Serpent’s Ring back. The other thing that is Harry Potter-ish is the Mysticus Orb has been stored into various relics, just like Voldemort’s use of horcruxes, but the relics are used as a protection measure and each territory has one, and is the key to opening the various portals into Sagaas, which reminds me of the show Stargate where they travel to various planets via portals. Of course, they had to have a specific code to open a portal gate, but it’s the same concept. Once in Sagaas, there are many gods – so it’s akin to the scenes in Hercules where we see all of the gods – meets Little Mermaid. From there, it is a fantasy mash-up, including polar bears!, and packed full of adventure.

This is a stellar book, with a wide range and variety of characters, world building with a goal to achieve, but Evan and Claire get stuck on several side adventures in order to follow and track down the Serpent’s Ring.

I was surprised with the easy-going and almost likeable nature between the two siblings, Evan and Claire. At one point on the way to the museum, they get in a slight argument in the backseat of the car and Claire gives Evan a look, and that’s the end of it. They both put forth a concentrated effort to keep the peace and make their mother happy. I can say, being the oldest sibling (with three younger brothers), we are a wrangler of our siblings’ behavior, but that doesn’t always work out the way we want, so kudos to this sibling duo.

Bolton did a great job with the world building – we get all of the insight of what’s going on in Sagaas in the prologue where we first meet Dunkle. I really liked the prologue insight from Dunkle about Earth, and it’s made clear he’s been around since Pangea. In this world, Earth’s continents are formed as a result of the Avarice War. There was not much information about this, so I feel that some of this will come into play in a later book.

For me, it started getting complicated to keep up with all of the characters (and their motives!) – and the bits of world building, so I had to start making a list of important information, which I share below. When I ended the book, there was Bolton’s own list! Also at the end, Bolton shared Magical Food Recipes for the unusual foods Evan and Claire encounter in Sagaas. Yummy!

Evan & Claire – sibling duo from Michigan, Evan has strange dreams that are a foreshadowing of reality

Dunkle – an imp, frequently scared or nervous, favored by the gods for part in Avarice War, protector of the Serpent’s Ring relic, also head guardian of the relics, leader of the Band of Unlikely Heroes

Sigurd – mythological hero made immortal by killing Fafnir, gifted with a magical ship, helps Evan and Claire on their quest

Vor – beautiful goddess who knows everything about everything, married to Dr. Irving, helps Evan and Claire

Sagaas – a secondary world made up of various territories that is forbidden for gods to leave, each territory granted one relic (piece of Mysticus Orb) and one relic protector who can travel between Sagaas and Earth, relics are kept on Earth and each can open a portal to Sagaas

Asgard – home of the Norse gods, a territory of Sagaas

Hlesey – island above the Under Sea hall

Loki – father of Jormundgand, not ready for demise, tricks Evan and Claire

Huldra – a woman who seduces young unmarried men into marrying her, has the tail of a cow, changes into a hag with the strength of many men and loses her tail if man agrees to marriage, tries to seduce Evan

Bergkonge – Mountain King, has physical form similar to a dragon, entices young women from the forest and takes to the mountain, tries to seduce Claire

Alamaz – imprisoned in Dungeon of Dreadful Dreams for his treachery of the gods, jealous of the gods’ powers, cunning and manipulative

Jormundgand – serpent so large that he can wrap himself around the world, if he let’s go the world ends

Ran – wife to Aegir, drowns men in her golden net and uses them as protectors of her treasures and the Undersea Hall

Himinglaeva – also mermaid, Lazonia’s friend, daughter of Aegir and Ran, wants to do the right thing

Dufa – also mermaid, daugther of Aegir and Ran, caused an upset in the sea world, unpredictable

I was surprised that even though there are many villains in this book, in the end, they rise beyond their anger and hatred to see reason and logic. They are kind, which is an unknown thing for a villain.

Bolton did base this novel loosely on Norse mythology.

I would recommend this book for ages 10-15ish, or those who are interested in Norse mythology.

A magical part of H.B. Bolton’s childhood was being swept into worlds of enchanting

characters, fantastical creatures and extraordinary powers—simply by picking up a book. As a mother and a teacher, she was compelled to create imaginary worlds of her own in order to share them, not just with her children, but with all children. H.B. Bolton lives in Florida with her supportive husband and two highly spirited children. Shh, can you keep a secret? Not only does she write books for the young-at-heart, adventurous sort who yearn to dive into a good young-adult fantasy story, she also writes spellbinding, heart pounding women’s fiction. These particular books are written under the name Barbara Brooke, but that’s another story, altogether.