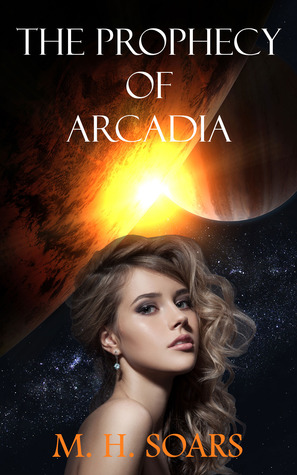 Being a teenager is tough, especially when you have to pretend to be something you’re not, and you’re in love with someone you shouldn’t. 115 years ago, a small planet called Arcadia was invaded by a vicious alien race and nearly destroyed. Cut off from their resources, the Arcadians turned to Earth for help. A group of Arcadian explorers discovered a Prophecy that claimed their salvation lay in the hands of two children from Earth. To ensure their safety, the Arcadian Council sent their most gifted youngsters to Earth to act as protectors. Samantha is one of them.To succeed in her mission she must learn to control her Arcadian powers and keep her true identity from her best friend, and the girl she swore to protect, Alexia. But Samantha will soon realize that nothing is as it seems. Someone is trying to prevent the Prophecy from taking place and the prophecy boy hasn’t been found yet. There is also a new drug circulating at school that is turning students into freakishly strong menaces.To make matters worse, distractions keep getting in her way. Such as her love/hate relationship with her “cousin” Matthew. Or her confused feelings toward popular and mysterious Julian. She wants nothing more than to be free to live her life. But the survival of Arcadia depends on her and her friends. Free will is not an option.

This book is all kinds of hot mess! Arcadia is a planet separate from Earth, but Arcadians look and function exactly like Earthlings (humans on Earth). Arcadia believes in a thing called the Prophecy. One flaw I saw in the book was that it wasn’t made very clear what the Prophecy would do long-term for the Arcadians; it was just a thing that was destined to happen.

Alexia lives in Santa Fe with her dad, but her uncle Gary and all her cousins live in Santa Barbara. Alexia goes to visit them every summer. Gary is known for his goofiness; he seems to be a scatterbrained hairball. Gary is only father to two of the cousins, the others he has taken guardianship over. A long time back, two other aunt/uncle couples and Gary’s wife died in a boating accident, and he took in all the kiddos. Of course, this is just a cover for them acting as Arcadian operatives. Things get dicey when a couple of them are required to go back to Arcadia for training, and lies must be made up to keep Alexia from knowing the truth.

When I first started reading I thought the novel would would center around Alexia, since she’s a Promised One and the center of the entire Arcadian world, essentially. Wrong! The novel seemed to revolve predominately over Samantha and Matt, “first cousins.” They are both twins, and Matthew’s twin has been sent back to Arcadia. Sam and her twin act nothing like twins, they are not close in the least. Meeting Sam and Matt started off very rocky – there is some definite back-story from seven years past, some event that took place on Arcadia – but all of their memories have been wiped away. All that’s left is this feeling – a hostile feeling. And overcoming that is one of the main themes throughout the book.

And the second is discovering that some things are not quite right with the Arcadian Council. Remember I said the Arcadian Council is so bent on the Prophecy being fulfilled? Well, so much so that there is a special operative secretly assigned to oversee the entire Alexia operation, who has his own secret spies infiltrate the cousins’ school, where Alexia will now attend for her senior year. This adds a dystopian element to the book.

Alexia develops this romance with wheelchair-bound Ethan, former football star, and Samantha and Matt have unfinished business, and Samantha develops a fast and furious fling with Julian, a hotshot rich kid whose parents are never to be found. Then a new kid comes to school, Lucas, and he’s very strange. Then, a second new kid comes to school, Henry, and the cousins are informed he is the Promised One. Gary starts acting strangely, and Alexia and Ethan must be broken up.

Julian throws extravagantly insane parties…where someone is pushing an insane drug. A drug that allows the alien race that almost eradicated Arcadians to inhibit and possess Earthlings — with superhero strengths and powers. Things start going wrong, and the cousins are not buying the story Durgin and Gary are feeding them. They suspect something is going on with the Council, who seem to try to be forcing the Prophecy to be fulfilled. They start their own investigations and discover some very shocking things about Arcadia, the Council, the Promised Ones…and there are a few murders on the way.

This book is part of a series, which I knew when I started. Within chapters, the point of view switched between characters: Alexia, Samantha and Matthew. At times, this became confusing because I would forget whose POV it was from, especially when one of the three characters was not in the scene, and even more when the cousins are debriefing and plotting.

About 40% of the way into the book, things were on a roll. After that, I thought it started falling apart a little bit. The focus switched from Alexia and Sam to Sam and Matt, which drug on. The further and further into the book, there were fewer scenes that Alexia owned. About halfway through the book I realized there were some fishing things going on, before the cousins let on. When they realized what was up, they all started plotting. At first they thought there was a snitch in their midst, but then I realized there was a snitch at large – somewhere between them, Gary, Durgin and the secret spies, one of which is always right there when one of the murders happens and the cousins are investigating.

Besides the reason for the Prophecy, there are three other items left unexplained by the end of the book that I predict will continue and/or come to light in the second book:

For example, he gives Alexia a necklace to give to Sam (but to say it’s an old birthday present and not from Julian), and when he sees Sam wearing it he flips out on her about where she got it.

This book does contain some adult content with language choice and sexual steam scenes. I would recommend for mature readers or 18 and up. 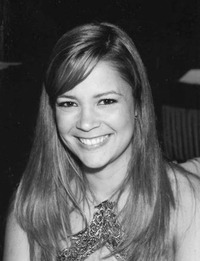 I like to call myself a United Nations child. I was born in the United States but grew up in several different countries which gave me a broader perspective of life. I’ve always been passionate about books and stories and at a certain point had a comic book series going. With a background in fashion design I always thought I was going to follow that path. But the characters in my head kept begging to be set free. So I decided to write their stories. A couple of years and a baby later, the first installment of my Arcadian Wars series is finally done. I currently reside in New Mexico with my husband and baby daughter. I love to read novels in the YA, PNR, Fantasy, Historical Fiction, and Chick Lit genres. When not devouring said novels, you may find me shopping online (I’m an expert), blogging about fashion, or trying to teach my daughter to walk (even though she’s too young for that).

One thought on “Book Review: The Prophecy of Arcadia”