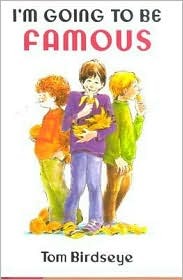 Determined to achieve fame by breaking several oddball world records in an upcoming contest, Arlo Moore and his friends practice fiendishly under the disapproval of parents and school principal.

I also read this book with my intervention class. They enjoyed it very much.

In this hilarious book, Arlo is determined to beat a world record, and when he hears the word “can’t” he looses it. He made some bets he probably couldn’t keep, even after his dad and the principal made them off-limits.

Arlo’s determination draws friends and even his pesky sister into the world-record breaking attempts. They set a specific date for the world record breaking performance and train almost daily until then. Arlo learns the Positive Brain Approach from his friend Ben to get himself in gear to beat the record.

At first, Arlo’s attitude about his sister is VERY “ugh, sister” like, but as the novel progresses and he and Kerry spend more time together, I think she grows on him a bit. By the end, he’s cheering her on in her world record attempt. Arlo also grows in his relationship with his older brother, who he has a strong bet with, and his brother’s girlfriend turns out to be Arlo’s cheerleader.

Arlo also makes an enemy at school – the nerd of his class, who is also a snotty snitch. Arlo is in love with a girl in his class (think wind blown hair, shining glow with a halo, crystalline music playing when he thinks about or sees this girl), and she winds up being the subject of a bet that brings it crumbling down around Arlo’s ears.

My kids loved this book, and I did too. I highly recommend this book to anyone 4th grade and up.

I grew up in North Carolina and Kentucky, an ardent fan of anything that smacked of sports, crawdads, mud balls, forts built in the woods, secret codes, bicycles without fenders, butter pecan ice cream, and snow. I was, however, decidedly uninterested in writing-or any academic aspect of school, for that matter-never imagining that at the age of thirty-five I would become a published author. And yet after two unrelated college degrees, a year living in Japan, and ten years of teaching experience, that is what happened. Life, it seems, is full of who’d-a-thought-its.I live in Corvallis, Oregon, with my wife, Debbie. Our two daughters, Kelsey and Amy, are both off on their own, living and working in Portland. When not writing, working at the Vermont College of Fine Arts MFA program in creative writing, or in classrooms talking with children and teachers about the writing process, I enjoy rock climbing, alpine ascents, scaling big trees, ski mountaineering, snowshoeing, backpacking, mountain biking, running, playing the string bass, and reading.Even after many books published and awards won, at times it still amazes me that writing is my profession. It was such a difficult process for me when I was a kid; I can really identify with the reluctant writer in school today. Everything seemed to get in the way of my completing stories: from being left-handed, to my poor spelling skills, from punctuation woes, to especially a lack of ideas. Fortunately, the right people came along at the right time and helped me see past the hurdles, emphasizing instead the joy of the work and the satisfaction to be had in trying to uncover the important truths that can come out of fiction. Now I carry a small notebook at all times and am always on the lookout for material I can use in a story: ordinary people that would make good characters, the funny, telling, or poignant glimpses of life that are triggered by what I see and hear, and the wonderfully wise things people will say at the most unexpected times.True, I still labor through my stories, wrestling with the spelling beast and the punctuation monster, writing and rewriting, then rewriting some more, until I glean my best, but the process has become one of pleasure instead of pain. I love doing it, and I love sharing it with others. The boy who couldn’t imagine himself a writer, now can’t imagine himself anything else.

One thought on “Review: I’m Going to Be Famous”