The dashing Lance McCulloch has stopped in today for an interview! He’s indulging about his debut novel, The Colors of Blue, and about the process of writing it.

Thank you for your interview. Can you tell readers a little about yourself?

I’m a 49 years old and only recently become a full-time author.  My wife Jennifer, three daughters, and I all call Boulder, Colorado home.  I have a degree from the University of Colorado in Chemical Engineering and spent the last ten years of my life starting and running a gear and technology company.  I love the outdoors and fly-fishing has been my go-to Zen for many years.

The Colors of Blue is your first novel. What line of work were you in prior to writing?

I have a degree from the University of Colorado in Chemical Engineering and focused most of my time in companies that manufacture semiconductors.  My focus had been in the area of plasma physics.  In 2003, I started my own gear and technology company and ran that on a day to day basis until 2010.

What inspired you to write The Colors of Blue?

My company had arrived at a unique GPS technology with military applications.  In 2007, a large public company approached my six-person company exploring a relationship to distribute our products.  I was excited and believed that we had hit the jackpot.  Unbeknownst to me, this company had an agenda that was outside of the terms of the distribution contract we signed.  The terms of that agreement made them the exclusive distributor of our product and when they missed a major US Army contract, they simply stepped away.

Their actions set forth a sequence of events including the loss of my company and a lawsuit I filed against this company.  I loved my employees and losing them and my company were some of the very darkest times in my life.

I needed something positive.  One day I closed the door of my office and simply began to write.  My book, The Colors of Blue, was the best and most positive thing to come out of those hard times, although, when a Dallas, Texas jury convicted the company of fraud in 2013, it was not bad either.

Can you expand on this quote?

“Although The Colors of Blue is fiction, it is loosely based on the true story of my father’s recovery from my mother’s death,” said McCulloch. “I also wrote it as a means of escaping the depression of my failing company.”

Since I was very young, I’ve found great solace in the outdoors of Colorado and especially fly-fishing on the remote rivers.  This is a very introspective experience and, over time, has allowed me to assess my life.  When I was in college, my mother came down with a terminal disease.  Eventually, she passed away, leaving my father to contend with the loss of his long-time partner.  They had met and married when he was in medical school and had been together for decades.

I spent a great deal of time on the river, not only contending with the loss of my mother, but also trying to understand how someone in my father’s position can move-on.  This is one of the primary story lines of The Colors of Blue and I tied into the introspective nature of fly-fishing.

How did you come to choose the title, The Colors of Blue?

That’s a great question!  In the end, I wanted to describe to the audience the most difficult of all things to put into words.  That thing is the emotion of love.  I thought that a clever way to do that would be to make it tangible, like a color that could be seen.   That consideration led to Sarah Field, my protagonist with a sixth sense.

For me, writing inspired by these kinds of events is very emotional and cathartic. Explain what the writing process was like for you.

The process of writing began as a healing process for me.  It was and is an endeavor into the positive and creative.  Although operating a small business has its moments of creativity, there is nothing like writing that provides end-to-end joy like creating characters, scenes, and constructing the story.  I think ‘cathartic’ is the perfect word to describe the process.  My wife will tell you that she often finds me deeply entrenched in the process with a wide grin on my face; usually there is a glass of wine too, should I mention that?

How did you come up with and develop the idea behind The Colors of Blue?

The first line I ever wrote was ‘Sarah Field lives in a world of colors.’  Believe it or not, when I began, I did not know the story I would write.  However, when I realized it was a story about the discovery of love, I knew what the colors meant to Sarah.

I must change places with some regularity to keep it ‘fresh.’  Often I will find myself at local coffee shops in Boulder, my office in our basement, or just the living room surrounded by my family.

What does a typical day for you look like?

Until very recently, I have been consumed with the law suit that I mentioned above.  I was the primary witness in a sixteen day trial and sat on the stand for four days straight testifying about several years of a business relationship and tens of thousands of documents.  Preparing for that occupied the better part of my day until December 20th, 2013.  Now, I’m reinventing my day.  So far, I start the day getting my youngest off to school, hitting the gym, usually a four mile walk with the dog, and then settling down to write until I run out of energy.   Following dinner, I may pick up the computer again if I feel compelled or enjoy a glass of red wine with my wife.

Do you have any books in the works?

I do; the current title is ‘The Funny Little Corners of Love.’  Once again, it is set in the Colorado Rockies, this time in the small town of Silverton, Colorado.  Two brothers will find each other again over the mystery of a train plunging into the Animas River.

What are your future goals as a writer?

My near term goal is to finish my second book.  Part of that is both hoping I have found a compelling story and working on my writing skills.  I am also hoping to expand my audience but, oddly, not for the purpose of making it an economic venture.  It warms me to hear from people who have found emotion in my writing and simply gotten lost in the story.

What do you want readers to take away from The Colors of Blue?

An early reader wrote me and said that my story made her laugh, cry, and think about life.  As she found, I hope that others can relate, feel, and understand the hand of cards that both Rick and Sarah have been dealt.  If my story catches the reader, perhaps I will be awarded with a few hours of their life to share the beauty of the human experience. 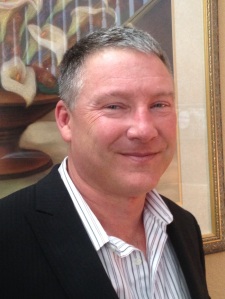 The Colors of Blue is Lance McCulloch’s first novel.  He wrote this novel as a way to cope with the loss of his parents.  He lost his mother to cancer and then his father in the crash of Egypt Air 990 in 1999.

McCulloch has one brother who currently manages his family’s cattle ranch.  He worked for Fujitsu Microelectronics for several years in Portland, Oregon, followed by Cirrus Logic in the San Francisco Bay area. Then, he launched his own business in 2003.

Born and raised in Durango, Colorado, McCulloch holds a bachelor’s degree in chemical engineering from University of Colorado.  Currently, he resides in Colorado with his wife Jennifer and their three wonderful daughters.