A little bio about Andrew, per his Goodreads profile:

Andrew Stock is the co-screenwriter of The Goods: Live Hard, Sell Hard (Paramount, 2009). He has Ph.D. in Political Theory from the University of Colorado and a law degree from the University of Texas. He currently works as an attorney for a non-profit organization in North Platte, Nebraska, where he lives. Gabe’s Plan is his first novel.

*Let me preempt by saying I entered the Goodreads book give-away for Andrew’s book. He contacted me via Goodreads and offered to send me a free copy of the book if I’d be willing to write a review, which is no problem for me. I was pleasantly surprised and quite excited that an author sought me out since I’ve just embarked on this book blogging journey. However, Andrew’s kindness has no affect on the content or opinions of this review. Enjoy!

When I first saw the cover art, I was expecting a quant, heartwarming story of some fool man scheming up a romantic plan to win back his heartbroken woman…until I read the book synopsis. Holy Hera! I knew it would be a good read, with repressed lovers, mental health issues and vengeance at the core. I did feel the synopsis said a little too much, but I had a feeling Stock has some unsuspected twists up his sleeve.

Reading the first chapter, I wasn’t expecting quite the content it contained. Fair warning: this is most definitely NOT a “teen” (young adult) book. Expect derogatory, homophobic and sexual commentary like “pulling down panties and spreading”, “new swinging dick,” “fuck his drunk brains out” and blowing a wad. I feel like this is my somewhat douche-y brother talking. So if you are surprised or shocked by that type of language, you can take it in style or take offense – but I encourage you to keep reading.

“…on this painted sky morning, Gabe was certain the American people would wake up ready to send Bush back to Texas, where everything is bigger, including the size of the dipshit in its politics.”

Although the book starts off with Gabe casting his presidential election vote at his elementary school and knowing from the synopsis that he is the DA, I didn’t think there would be much of a political influence. I have to ask myself, Is this a little of the author’s barbing opinion coming out? I wasn’t sure, but I am a Texan born and bred, after all. In all seriousness, I often don’t agree with politics or politicians – no matter the party or the person. I believe in doing what is right, and what makes sense. And I have a sense of humor, and that’s how I read this part. So I’d advise taking this book with a little grain of salt if politics are not your cup of tea. Mmmm, salty tea…not so delish. Let’s make it sugar?

In all seriousness, after the flagrant political and douche bag comments, I was ready to chuck the book, but I pressed on. And then I was ready to give a very critical review of the political nature underlying the book. But…it grew on me. If you are ready to toss this book like I was, keep reading. You are indeed in for a treat.

Despite his womanizing ways, Chad is a “devout Republican and a big-time believer in the institution of monogamous heterosexual marriage.” He has no care for how his overt sexcapades can end up hurting his Hollywood image (or is that his image?) let alone a ton of women, but he cares for the sanctity of marriage. Seriously? What a contradiction! Chad’s “moral grounding” doesn’t hold much water.

Stock has set up a good foil here: Chad and Gabe are opposites. Gabe is an intelligent war veteran-turned-attorney. He is respectable (both in part from his war tour and his current DA job) and due to his position, beyond moral reproach. Chad on the other hand, is a glutton bully with ravishing sexual habits. He’s the kind of douche who will hog the sidewalk and make a gimp war veteran step off the path and into a puddle. This strikes a special cord in me, as the men in my family have all given up of their bodies and abilities to serve our country in almost every branch. Needless to say, I don’t see much growth for Chad. And Gabe’s the kind of guy who will say his peace, yet again be shoehorned because he’ll be late for his DA appointments. But one too many times and… just keep on smirking asshole.

Chad is most definitely threatened by Gabe – he uses multisyllabic words! With Chad and Gabe’s feud over Kaila, Chad may have more monetary influence, but Gabe has more power and the upper hand. I’m not sure that he loves, let alone likes Kaila overmuch, but he’s placing her in the hot seat to pursue his vengeance of Chad the Bully. I’m sure I’ve seen that episode of Cold Case Files; cop frames ex-lover’s paramour and takes him down – and despite my propriety for right and justice…in that sick and twisted way that is human nature, I get it. I really do. It’s relatable – no matter the situation. Someone consistently abuses their powers (whether supposed like Chad’s, or real like Gabe’s) at the expense of others, and karma’s a bitch of a payback.

Unfortunately, unbeknownst to him, Gabe is caught in a love triangle…or square without one side – and it may just blow his case, which he claims is the “biggest criminal case of the 21st century,” and not just because his assistant wants to be “on Gabe faster than a coyote on a sack of cheeseburgers” to “fuck his drunk brains out.” Now, that made me laugh! But that quickly changed – and just as I predicted, Stock delivers a quite shocking twist, and then another when Gabe creates an imaginary friend, who just might ruin everything…

Despite what the book synopsis says, I was surprised because it’s not so much Gabe pushing for this revenge as it is Kaila…and although Gabe is dealing with some, er, personal issues, he has visits from his hero, past president Abe Lincoln, and a very unlikely series of conversations ensue. I couldn’t help but notice Gabe’s hero of choice, Abe, is juxtaposed next to Gabe’s name after a particularly pivotal point in the book…and makes me think Gabe means Guilty Abe. I also found it interesting that Stock used the name Gabriel for the main character. We all know Gabriel served as a messenger between God and humans in Biblical times. Is this another manifestation of Gabe’s ego?

The time setting of the book is finally revealed in Chapter 9, when Gabe starts recording information about the trial for his next book at his book agent’s request. Although it’s not made clear how much time has passed, it doesn’t seem more than a short few months. His first entry is dated September 2005 after the preliminary hearing, yet at the beginning of the book Bush had just been re-elected, which would have been November 2004. The timing isn’t fully revealed, but it does take a while to get a case to trial.

I think Stock’s personal sense of humor can be found through Gabe’s writing: he juxtaposes Gabe’s free-writing of a college English class and bad grammar with an incredibly long and somewhat comical run-on sentence, like the awkward boy-next-door type. As an English minor, I can see irony, humor and reality of it.

And the humor continues…

And just as it is always darkest before the dawn, it is always quietest in a courtroom before a witness answers a question about where his penis had been.

Actually, he probably loved his kids more than Gabe, but they were four and six-years-old and didn’t seem like real people yet – more like talking pets.

As I read further into the last few chapters through the thick and heavy, I had an epiphany. Gabe and his imaginary friend remind me starkly of Edward Norton’s role as The Narrator and Brad Pitt’s role as Tyler Durden in Fight Club. I did an extensive writing project on this movie for my freshman English class, so I’m very familiar with the movie. If you’re not, I encourage you to watch it – a few times – after you’ve read Gabe’s Plan to see the connection. I don’t want to give it away and ruin the movie, or the book, for readers, but the closing photo is a hint.

There’s no neat way to wrap up this novel at the time immediately after the trial, so it surprised me that there was an epilogue. After Fred revealed some of his knowledge to brother Gabe earlier in the book, I was sure the closing arguments of the trial would be the ending of the book – clear cut, yet ambiguous.  (I know, what a paradox.) The epilogue is set right at Obama’s win over McCain in 2008, and Gabe has indeed become a great man. However, you’ll be surprised who he meets…and the outcome of a murder. 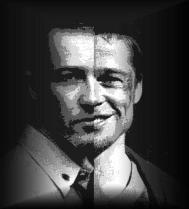